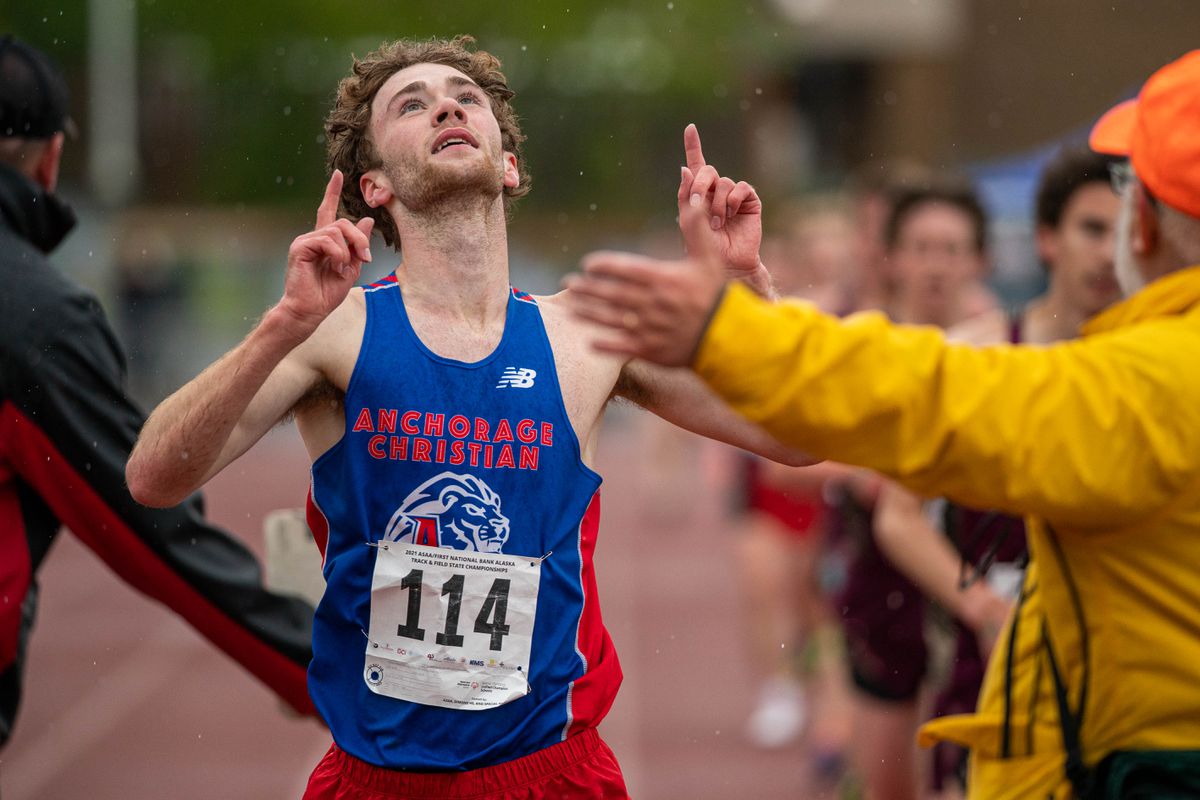 Anchorage Christian runner Tristian Merchant points to the sky after breaking the state record in the 3,200 meters Friday at the state track and field championships at Dimond High. (Loren Holmes / ADN)

Anchorage Christian runner Tristian Merchant points to the sky after breaking the state record in the 3,200 meters Friday at the state track and field championships at Dimond High. (Loren Holmes / ADN)

Nothing was going to rain on Tristian Merchant’s parade Friday afternoon. Not a stomachache. Not big-race pressure amplified by universal expectations of a record-breaking run. Not even rain.

Merchant smashed Alaska’s 3,200-meter on the opening day of the state track and field championships at Dimond High with a performance that sizzled through the falling rain.

Merchant, who graduated from Anchorage Christian earlier this month, broke the old record by more than 16 seconds. He was one of 16 runners in the race, and he lapped 14 of the other 15. He even surpassed the Alaska standard for two miles set in 1975 by the great Don Clary.

He posted a time of 8 minutes, 52.53 seconds, which ranks as the 16th fastest high school time in the nation this season, according to athletic.net.

“I was definitely looking forward to this meet and running a really fast time,” Merchant said after congratulating other runners in the race. “I’m super happy with that.”

His performance blew away the previous state record of 9:09.41 set by Kodiak’s Levi Thomet in 2015. And it removed an asterisk from the Alaska high school record book.

At the 1975 state meet, Clary set a two-mile record with a hand-held time of 9:04.4. High schools later switched from yards to meters, with the 3,200 replacing two miles, which measure 3,219 meters. Clary’s two-mile time converts to a 3,200-meter time of 9:01 — something never threatened until this season and therefore worthy of recognition in Alaska’s official record book, which for many years has included this footnote:

“I wanted to try to break that,” said Merchant, who knows what Clary achieved in high school, college and beyond — including making it to the 5,000-meter semifinals at the 1984 Summer Olympics — and is more than impressed. “That guy is crazy.”

So is Merchant, or at least so was his race on Friday afternoon.

He started lapping people by the fifth lap of the eight-lap race. He passed on the outside every time, something ACS coach Jake Moe said may have added a full second, maybe more, to his time.

He ran the first 1,600 meters in 4:26 and duplicated that time in the second half. His fastest splits were 64 seconds, coming in the first lap and the final lap.

And unless he was lapping someone, Merchant ran by himself, something he’s done most of the year, in both track and cross country.

“I pray about it during warmups and ask for focus,” he said. “Running’s really mental, so staying focused is really important.”

Merchant, who is headed to a Northern Arizona University team loaded with powerhouse distance runners, came into Friday’s race with huge expectations. He wanted the record, Moe wanted the record, and everyone who follows Alaska track and field anticipated a record.

“My stomach was hurting really bad,” Merchant said. But the pain went away right before the race, he said.

And while the rain didn’t go away, gusting winds did.

“I looked at the weather and I thought, ‘It’s gonna be terrible,’ ‘‘ he said. “But this is some of my favorite weather to run in — 50 degrees and raining. It makes it more fun. It’s good to feel water droplets hitting your face.”

The top high school time in the nation this year is 8:43.42. Moe said the goal for Merchant was a time of 8:48, “but the rain and the lapping made the difference,” he said.

The only runner who didn’t get lapped by Merchant was Grace Christian sophomore David Sliwinski, who finished second in 9:48.13 — a personal-best by .07 of a second.

“He definitely gives us a goal to reach, to pursue how to improve our times,” Sliwinski said.

A fleet of Grace Christian runners filled the top 11, with Sliwinski leading a 2-3-4-5 finish for the Grizzlies, who also had the seventh-place, ninth-place and 11th-place runners. Among those seven, four registered PRs; fourth-place Seth Lochmann took nine seconds off his previous best; fifth-place Aiden Zingone took eight seconds off his and seventh-place Ben Thrasher took 11 off his.

They don’t get discouraged when Merchant laps them and finishes more than a minute ahead of them, Grace Christian coach Tara Edwards said.

“He’s such a nice young man,” she said. “They’re all rooting for him.”

Moe graduated from ACS in 2010 and since then has been a top runner in many Anchorage footraces. He said he was an adequate running partner when Merchant was a freshman and sophomore, but he can’t keep up with him now.

Now we’ll see how long Merchant’s record lasts. Chris Waythomas, an accomplished distance runner who is an assistant coach for ACS, thinks it could be awhile.

“That kind of talent doesn’t come along often,” Waythomas said. “He’s very smart, he’s knowledgeable about the sport and he’s patient. He knows about the work that goes into it.”

Friday was a time for a special race from a special kid, he said: “Especially when a record stands for awhile. When someone breaks it, it’s an accomplishment.”