Make some noise, Cowbell Crew — the boys are back in town for Aces alumni game 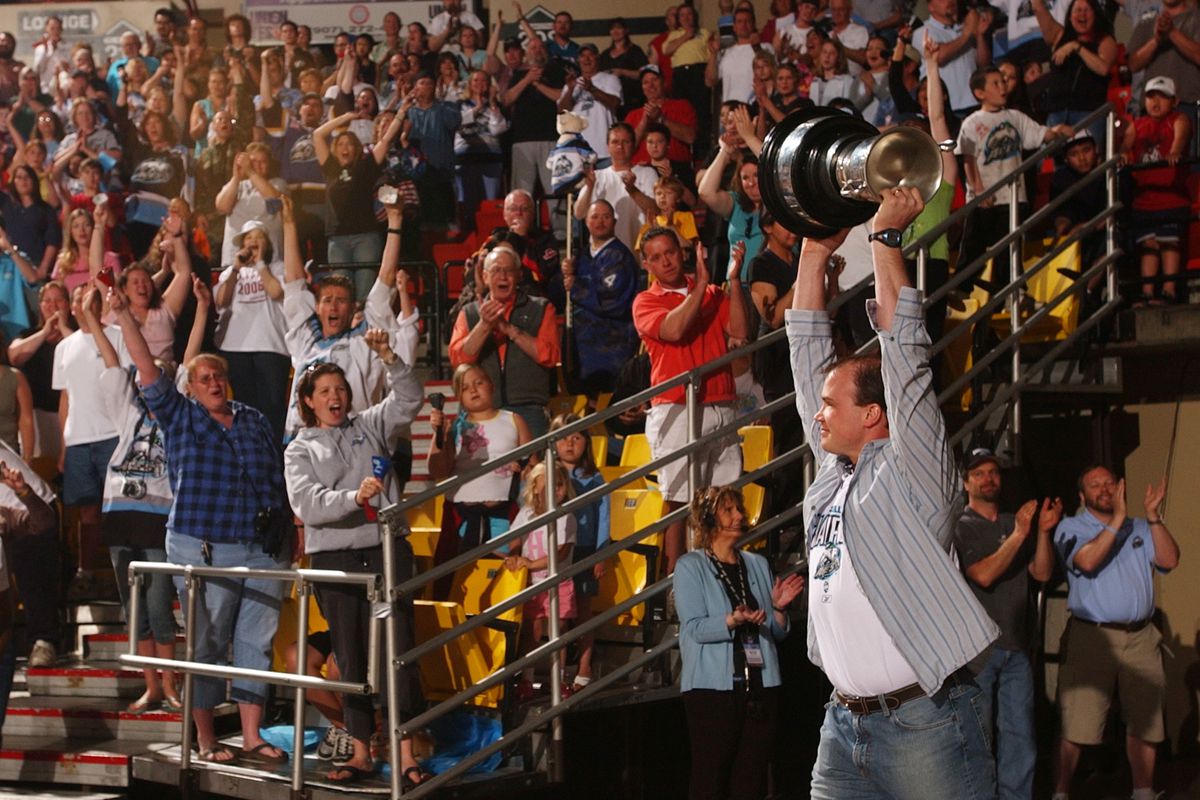 In an Instagram post earlier this week, Kane Lafranchise poignantly bemoaned his inability to make it back to Anchoarge this week for the Alaska Aces alumni celebration.

Lafranchise, a former defenseman and eight-year pro, shared a 2014 photo of him on the ice in Cincinnati, Ohio, hoisting the ECHL’s Kelly Cup with the Aces.

“Words can’t describe how excited I am for the city of Anchorage and the Aces fan base,” wrote Lafranchise, who played three years at UAA and parts of four seasons with the Aces, helping them win two of their three Kelly Cup championships (2011 and 2014).

Lafranchise went on to thank fans, coaches and teammates. Then the man once chosen by The Hockey News as having the best name in hockey name-dropped Moose’s Tooth, F Street Station and the franchise’s famed Cowbell Crew, the fans who filled Sullivan Arena with noise and energy.

“(They) showed me what family away from home could really feel like,” Lafranchise wrote. “I owe a lot to this city and the people that inhabit it.”

Lafranchise’s heartfelt post may speak directly to why the alumni weekend celebration is happening a little more than two years after the team folded at the end of the 2016-17 season. Fans loved the Aces, and the Aces loved them back.

More than 60 blasts from the Aces’ past — players, coaches and other luminaries — are scheduled to participate in two charity games Friday and Saturday at Sullivan Arena. Although some tickets remained available for Friday’s 7 p.m. game, Saturday night’s is sold out.

Keith McCambridge, captain of the Aces’ 2006 championship team and a former head coach, traveled from his Connecticut home for the occasion. McCambridge, whose 13-year-old son Aidan was born in Anchorage during the 2006 conference finals against Fresno, took what he learned here as a coach to the AAA-level American Hockey League, where he worked for several seasons.

“My roots are in Alaska, it’s where I got started as a coach,” said McCambridge, who will be one of the coaches this weekend. “We had such a close-knit community of support and there was such a pride factor.

“It was really a badge of honor to be part of such a first-class organization. It’s amazing to see how so many people connected to the franchise have sprinkled out into the rest of the hockey world.”

McCambridge said he’s eager for the chance to reconnect and discuss memories.

“The championship bond is something we’ll always have,” he said.

The games are being staged by Alaska Aces Alumni, Inc., a nonprofit group created earlier this year by Kevin Hao, Louis Imbriani and Bob Lester. Proceeds will benefit the Armed Services YMCA and Toys for Tots.

“To us, this is our hockey community coming together,” said Hao, a longtime manager of game-night festivities for the Aces. “At the same time, it’s a chance to reminisce about what the Aces were.

“Moreover, we want this to be a tribute to the fans and all the players.”

The Aces played eight professional seasons in the defunct West Coast Hockey League before embarking on 14 mostly brilliant campaigns in the ECHL, considered the world’s premier AA-level development league. The Aces started as an elite USA Hockey recreational team in the early 1990s.

In total, 209 Aces played for the WCHL team and 335 played in the ECHL. As part of his 19-year playing career, Kimbi Daniels did both.

He played 202 games for the Aces in three WCHL seasons and 284 games as part of five ECHL campaigns. He was part of the 2006 title run, memorably scoring a pair of short-handed goals with Alaska down two skaters.

“The Aces were here for quite a while and I was fortunate enough to be here for close to half that time period,” said Daniels, one of many former players who has made Anchorage home.

“It almost seems like the team was here, then gone just as quick. Something that had been here for 20 years, that doesn’t really seem right. Boom — the team was just gone. The last few years without the Aces being here remind us that there really isn’t a lot to do in the winter.”

Logistics and economics make the prospect of another pro team calling Anchorage home remote — the Aces lost $1 million in each of their final two seasons. That makes this weekend a time to recollect and celebrate the good times.

At 45, McCambridge said he’s glad to stay behind the bench for the two games, which will consist of three 20-minute periods with clock stoppages at whistles.

“You may see a few shorter shifts at times,” McCambridge said.

At 46, Daniels said he’s happy to see that both teams will have nearly 20 players each night.

“Plenty of players, and plenty of time to rest,” he said.