Once the toast of the town, UAA hockey is toast, and it’s sad but not surprising 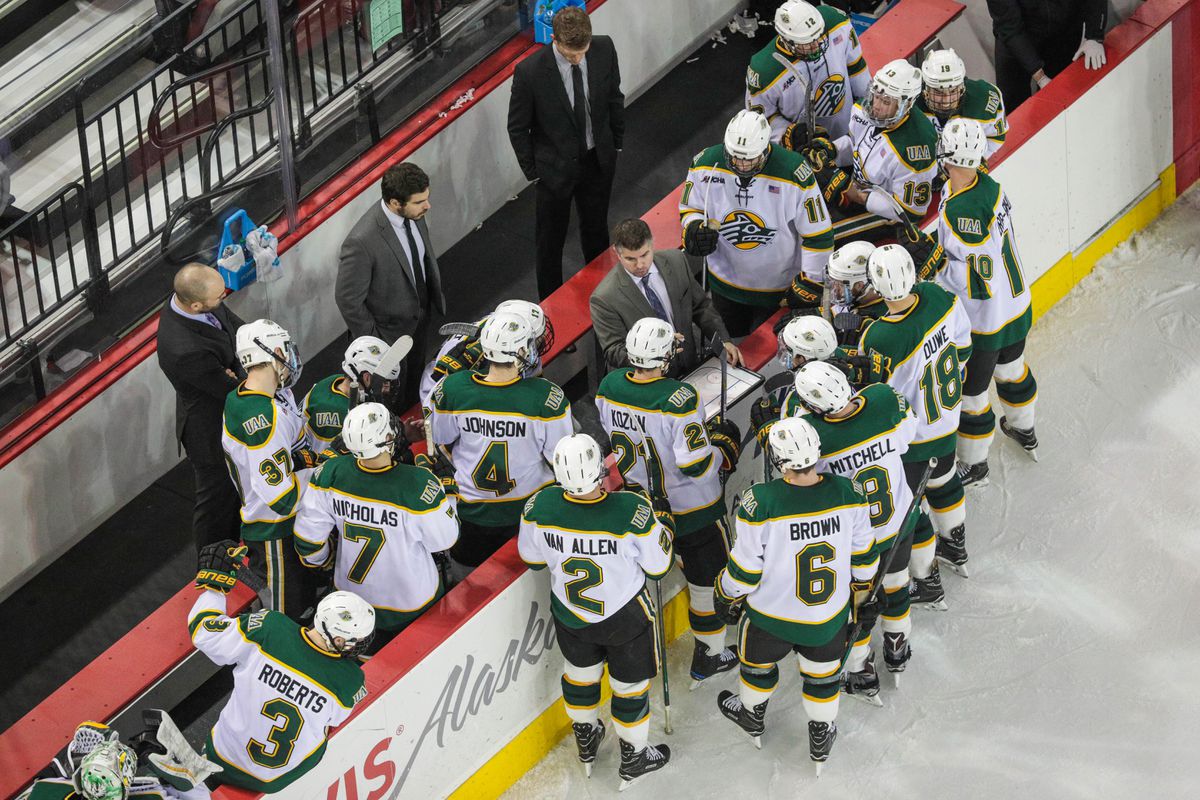 UAA head coach Matt Thomas gives his team some guidance during the third period of a game against Bemidji on Dec. 31, 2016 at the Sullivan Arena. (Loren Holmes / ADN archive 2016)

UAA head coach Matt Thomas gives his team some guidance during the third period of a game against Bemidji on Dec. 31, 2016 at the Sullivan Arena. (Loren Holmes / ADN archive 2016)

UAA hockey is dead and, weirdly, the obituary preceded the death, which made it chef’s-kiss on-brand in this surreal 2020.

The university last week announced it will soon eliminate hockey, once the school’s hugely popular flagship program — ask your parents, or possibly your grandparents, kids — and three other sports to save $2.5 million as part of its massive budget slashing. Gone too after the upcoming seasons — and who knows what that means in these pandemic days — are gymnastics and men’s and women’s skiing.

For a hockey program once the biggest draw in town, this has been a long time coming.

Losing seasons have been the norm for more than two decades, and grievously losing seasons especially the norm of late. Attendance hemorrhaged so badly for so long the school last season moved home games from Sullivan Arena, which had become funereal, to its tiny on-campus facility.

UAA hockey cost a fortune and brought in a pittance. Oh, and most programs in UAA’s conference, the Western Collegiate Hockey Association, are bailing to form their own conference, leaving UAA, UAF and Alabama-Huntsville on the outs.

In sum, UAA hockey checked a lot of the wrong boxes at the wrong time.

That its demise was unsurprising, though, does not make it any less painful. Nor less sad. UAA hockey leaves a legacy.

You could once call Anchorage a hockey town and get little argument about a place that entertained the 1989 World Junior Championship. Not now, when Anchorage as a hockey town sounds, sadly, like a punchline.

After all, the Alaska Aces, the once hugely popular pro team and three-time champion of the ECHL, folded for financial reasons in 2017. Now UAA sputters its last gasps.

For the first time since 1979, the year Brush Christiansen founded his fledgling green and gold, the city will soon be without high-level hockey, which seems unfathomable.

This Seawolves program was once the heartbeat of hockey in Anchorage and a pillar of the community’s culture. The program Christiansen quickly built into a Division II power and then transitioned into Division I in short order became of the talk of the town soon after moving into the freshly built Sullivan Arena for the 1984-85 season. By then UAA had debuted its own holiday tournament and already begun to forge memories and storied history.

In the 1983-84 season, as a Division II team, UAA lost the championship game of its inaugural tournament, but that 3-2 loss to defending Division I national champion North Dakota proved a building block. In the 1988 tournament championship, UAA center Steve Bogoyevac’s strike in double overtime felled Western Michigan and delivered an iconic moment — the goal received its own shorthand, “The Wraparound.’'

Local kids grew up with UAA hockey players as their heroes. A kid named Scotty Gomez came up in Airport Heights in awe of the Seawolves. He became an NHL player and two-time Stanley Cup winner, the best player ever from Alaska, but ask him today about watching the Seawolves growing up and he’s suddenly a 40-year-old channeling his 12-year-old self again.

UAA in 1991 delivered one of the most shocking upsets in NCAA tournament history. The upstart independent, a team without a conference and a massive underdog to traditional power Boston College, blew into Beantown and swept the best-of-3 series. That jaw-dropper recently was recognized by the Alaska Sports Hall of Fame in a category celebrating great moments.

By the time the Seawolves became a full member of the WCHA for the 1993-94 season, they were the toast of this town. For two consecutive seasons, UAA sold out every home game at Sullivan — standing-room-only crowds of 6,406.

Seawolf hockey was the game to see and Sullivan was the place to be seen. UAA game tickets were scalped — seriously.

Seawolf hockey even managed to prosper in hard times. After a program-worst 1-28-7 campaign in 2002-03 that was the embodiment of Murphy’s Law — arguably the low point, and inarguably the most bizarre point, came when a sign fell off the Sullivan scoreboard and injured a Seawolf during warmups one night — the Seawolves rebounded remarkably. They shocked host Wisconsin the following season in the first round of the playoffs and advanced to the WCHA Final Five for the first time.

The searing memory from the clinching 4-1 win in Madison to take the best-of-3 series was the Anchorage and alumni fingerprints that were all over it. The Seawolves at game’s end poured off their bench to mob their goaltender, Chris King, an East High kid. The guy who scored two goals and assist that night was Chris Fournier, another East High kid. The head coach was John Hill, a Bartlett boy and former UAA captain. The assistant coaches were Jack Kowal, an East High kid and former Seawolf, and former Seawolves Keith Morris and Chad Meyhoff.

And while the Seawolves celebrated, one of them, an East High kid named Justin Johnson had the presence of mind to pocket the game puck. He later presented it to Hill, which moved the coach to tears. JJ was an Anchorage kid through-and-through — he understood the significance, the magnificence, of the moment.

Dozens of Anchorage kids wore the green and gold, as did players from across the United States, as well as Canada and Europe. Many of them stayed in town after their playing careers, and they became part of the fabric of the community. They are teachers and firefighters and bankers, and so many of them coach youth hockey.

Soon, though, youth hockey players will no longer have Seawolves to inspire them, and the coaching pipeline that connected Seawolves to their community after their playing days will be severed. And, unfortunately, girls in Anchorage never got to see the addition of women’s hockey at UAA.

About two dozen members of UAA’s Seawolf Hall of Fame come from the programs — hockey, skiing and gymnastics — that will soon be history. This must be hard for Christiansen, a good man who built a program from nothing, nurtured it, loved it and gave so much of his heart to it and to the players who helped him build it. Ditto for Paul Stoklos, who started and developed the gymnastics team, and Paul Crews, who along with the late Tom Besh, molded the ski program.

Soon, all that will remain of these UAA programs will be memories. That is simply sad, and surreal, and so very 2020.

Doyle Woody covered hockey and other sports for the Anchorage Daily News for 34 years. He lives in Nashville, Tennessee. Contact him at doylewoody@yahoo.com.

— UAA chancellor Cathy Sandeen will hold a virtual town hall meeting Wednesday from 5-6 p.m. to discuss the university’s plan to eliminate hockey, skiing and gymnastics. To learn how to participate, go to www.uaa.alaska.edu/calendars/

— The Anchorage Hockey Association is planning a rally Wednesday from 4-7 p.m. at City Hall (632 West 6th Avenue) to protest the use of Sullivan Arena and Ben Boeke Ice Arena as homeless shelters as well as the elimination of UAA hockey.