Some Alaska hockey teams traveled to Texas expecting sunshine and warmth. All they got was more winter. 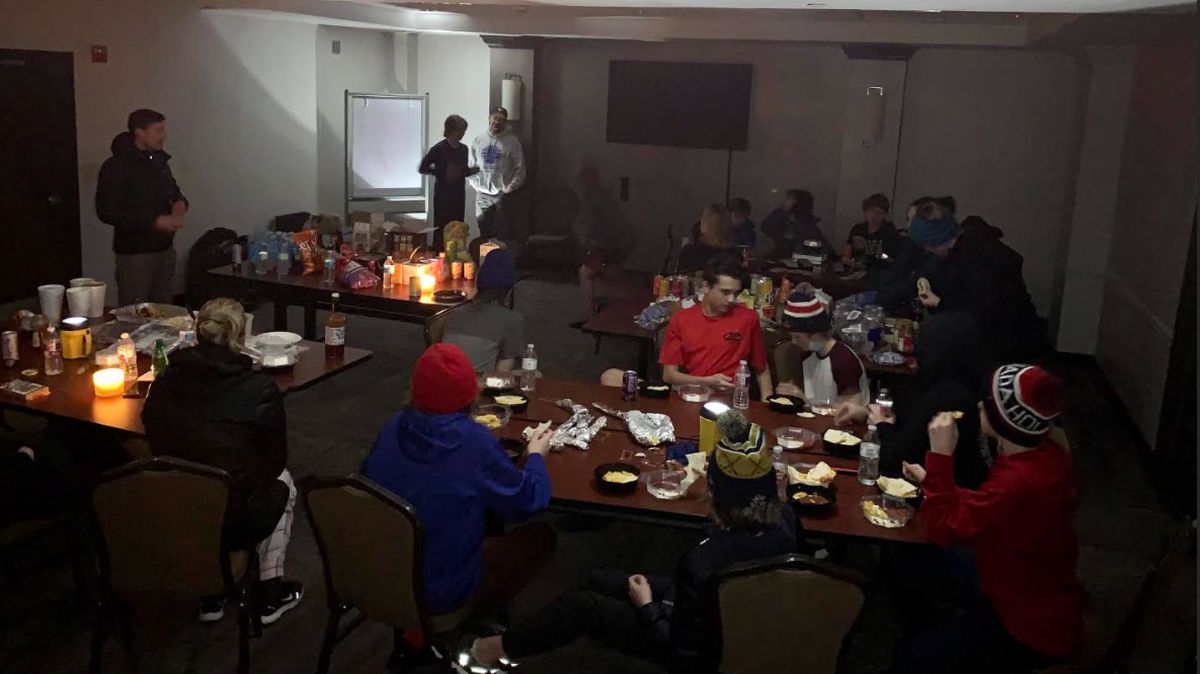 Members of the Alaska All Stars hockey team play charades and eat cheese quesadillas Monday in a darkened meeting room at the Hyatt Place in Austin, Texas. The hotel was without power for more than 30 hours. (Photo by Chris Heisten)

Members of the Alaska All Stars hockey team play charades and eat cheese quesadillas Monday in a darkened meeting room at the Hyatt Place in Austin, Texas. The hotel was without power for more than 30 hours. (Photo by Chris Heisten)

Two youth hockey teams from Anchorage are stuck in a Texas city paralyzed by a relentless and unprecedented blast of winter, and Alaska Oilers coach Merit Waldrop doesn’t want to hear another word about how the Alaskans brought the cold weather with them.

The teams are in Austin for a showcase tournament, a trip everyone thought would be a respite from winter. Fourteen-year-old Liam Lierman of the Alaska All Stars packed shorts, T-shirts, a couple of pairs of pants and, fortuitously, two sweatshirts.

It was about 25 degrees in Austin last Thursday when the Alaska teams arrived, and it only got worse. By Sunday, with temperatures near zero and snow and ice making the roads treacherous, the hockey rink and just about everything else shut down, and the Alaskans were left in the dark.

“We’re staying in a 12-story hotel with no heat, no electricity and no power,” Waldrop said. “It’s warmer outside than it is inside.

“... Every store and gas station is closed. Pumps don’t even work. The whole power grid is down.”

Waldrop spoke while sitting in one of the team’s rented minivans, a go-to spot for charging cellphones. He was cold, hungry, weary — and a little touchy about being blamed for the weather.

“I have been texted, called, Instagrammed and Facebooked about a hundred times by people saying, ‘You brought this here. This is your fault.’ It kind of got old,” he said.

At least two other Alaska hockey teams were stuck in Dallas on Tuesday, a U16 team from the Anchorage North Stars and a U16 team from the Eagle River Blue Devils. Their Sunday games were canceled when the city was thrust into a deep freeze, and so were their flights back to Alaska.

The upside: When outdoor pools freeze in Texas, Alaskans know what to do. They shoot pucks on it, which is what the All Stars did outside their hotel on Tuesday.

Silver linings—our power just came back on after 30+ hours, the kids have played a game against another team stuck here...

Most everyone is rebooked on flights later this week. The teams in Austin each have 16 players ages 13-14, and the teams in Dallas have about the same number of players, ages 15-16.

The teams in Austin spent the last couple of days foraging for food.

“The other day a couple dads and I drove an hour to find cheese quesadillas,” said All Stars coach Chris Heisten. “We tried to get groceries today, and it was a 3 1/2-hour wait and the store had been ransacked.”

For lunch on Tuesday, Heisten and a parent went to a drive-thru taco place that had a $20 limit in place. They waited an hour for 16 tacos.

Waldrop and the Oilers hit the jackpot when they found a pizza place willing to cook for them.

“We got lucky,” he said. “Last night it was chips and beef jerky.”

The scene was wild at a Target store where the Oilers stocked up on nonperishable food, which was the only kind the store would sell, Waldrop said.

“It was pandemic, part two,” he said. “A thousand people in line.”

The elevator is still working at the hotel where the Oilers are staying, but nothing else is. “You walk into the hotel room and you can see your breath,” Waldrop said.

The All Stars had it even rougher at what Heisten jokingly called “the Ice Coffin Hotel.” They were without power from 2 a.m. Monday till noon Tuesday, and Monday’s dinner was tuna fish out of a bag.

The team played charades and cards to pass the time, Lierman said. “We ate peanut butter and jelly for a day and a half,” he said.

Between the power outages and the makeshift meals, there was some actual hockey happening — the All Stars went 5-0-1 and the Oilers went 6-1-2 at the tournament.

A few other teams were still in Austin on Tuesday, so each Alaska team played one final game before scrimmaging each other. They got the extra ice time at Chaparral Ice because the rink manager is Adam Powell, who played college hockey in Fairbanks and is a longtime friend of Waldrop’s.

On Tuesday night, the Oilers and All Stars ate together at a steakhouse that agreed to stay open late for the Alaskans. It was staffed by a manager, one cook and one server, Lierman said, and everyone ordered steak.

“Things are looking up right now,” Heisten said as he waited for his first meal of the day (all of the tacos went to the kids). “The kids were able to bond, and they’re all in really good spirits, which is actually amazing.”