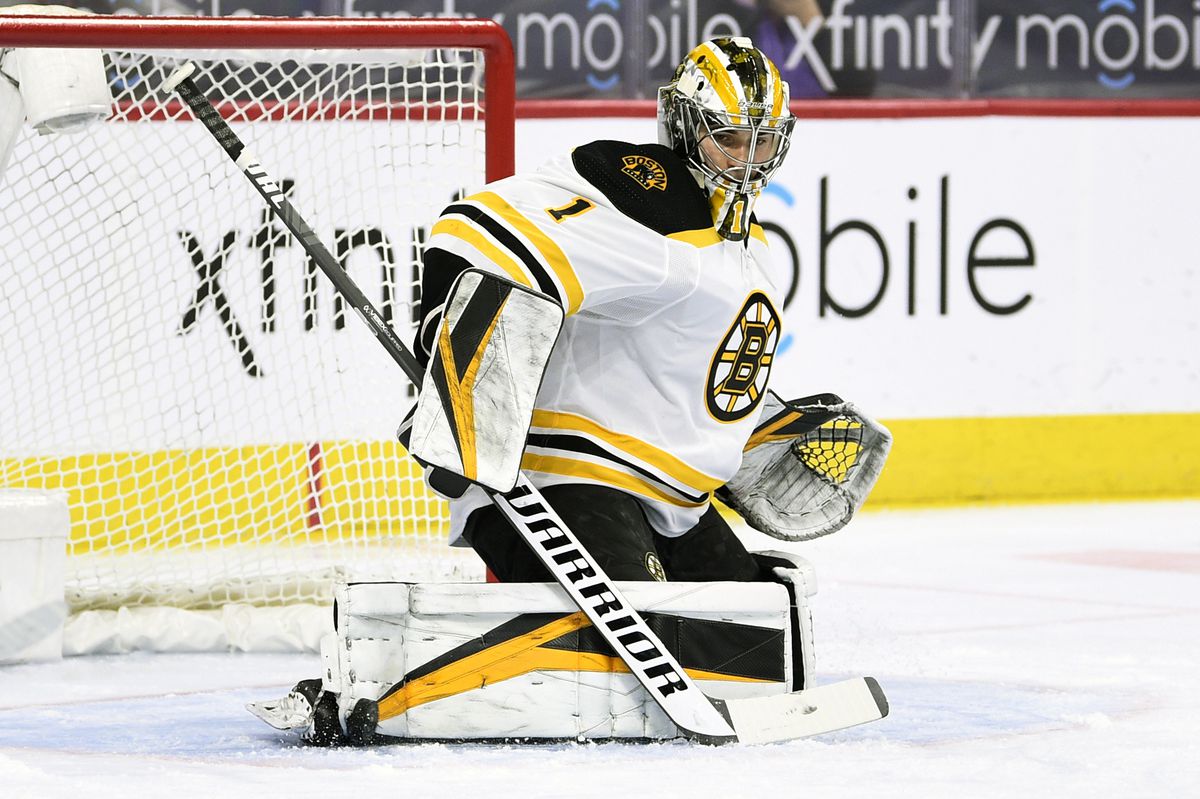 Bruins goaltender Jeremy Swayman of Anchorage makes a pad save on a shot during the first period of an NHL hockey game against the Flyers on Tuesday in Philadelphia. (Derik Hamilton / Associated Press)

Bruins goaltender Jeremy Swayman of Anchorage makes a pad save on a shot during the first period of an NHL hockey game against the Flyers on Tuesday in Philadelphia. (Derik Hamilton / Associated Press)

PHILADELPHIA — Jeremy Swayman sounded as if he was giving an awards acceptance speech as he rattled off a lengthy list of people he recognized for helping him reach the NHL.

The 22-year-old goalie could thank Patrice Bergeron and Brad Marchand for making him a winner in his debut.

Bergeron recorded a hat trick and reached 900 career points, and Marchand’s short-handed goal led the Boston Bruins to a 4-2 win over the Philadelphia Flyers on Tuesday night.

“What an incredible experience,” Swayman said. “To get a win here in Philly, it means everything.”

Marchand’s goal midway through the third period helped put more distance between the Bruins and Flyers for the final playoff spot in the East Division. The Bruins now hold a five-point lead over the Flyers for fourth.

Bergeron added an empty-netter in the final minute.

Jake Voracek and Shayne Gostisbehere scored for the Flyers.

Philadelphia’s Carter Hart, who has been ineffective for more than a month, was outplayed by another 22-year-old goalie in Swayman. Swayman survived Philadelphia’s 25-shot second period and he made 40 saves.

“He deserved much better support than we gave him,” coach Bruce Cassidy said, “and he eventually got it in the third.”

Swayman’s NHL debut made him the fourth goalie to play for the Bruins this season. Jaroslav Halak tested positive for COVID-19 and Tuukka Rask is still sidelined with an undisclosed upper-body injury. Dan Vladar made 29 saves in the first game of the back-to-back set.

The Anchorage native claimed multiple college hockey awards at the end of his junior season last year at the University of Maine: Hockey East Player of the Year, Mike Richter Award as college hockey’s best goaltender and first team NCAA All-America. He was also one of three finalists for the Hobey Baker, college hockey’s highest honor.

Swayman is the third Alaskan to start in goal. Ty Conklin made his debut in 2001 and Phoenix Copley made his in 2016.

The Flyers beat the Bruins 3-2 on Travis Sanheim’s overtime goal a night earlier for their first win in six games in the series this season.

Bergeron’s three-goal effort — he has 15 goals this season — helped the Bruins split the home-and-home set.

Swayman stopped Scott Laughton on a breakaway and Bergeron scored his second goal off the rush from the slot for a 2-0 lead. He now has seven goals in seven games this season against the Flyers.

Needing every point they can get, the Flyers gamely rallied in the second.

Voracek tapped in Travis Konecny’s shot from the circle to make it a 2-1 game. The Flyers needed about 90 seconds to even the score on Voracek’s cross-ice pass to Gostisbehere for his sixth goal of the season.

Gostisbehere has already scored more goals than the five he had in 42 games last season — and that includes a stint on the waiver wire. The 27-year-old defenseman was placed on waivers last week and went unclaimed. Gostisbehere said he tried not to take the decision personally — the Flyers gained some salary cap flexibility with the move — and he fit right back in as the Flyers make a playoff push with 18 games left this season.

The Flyers took only four shots in the third.