Mentored by a former Seawolf, a mended 12-year-old returns to the ice at an event that aims to save UAA hockey 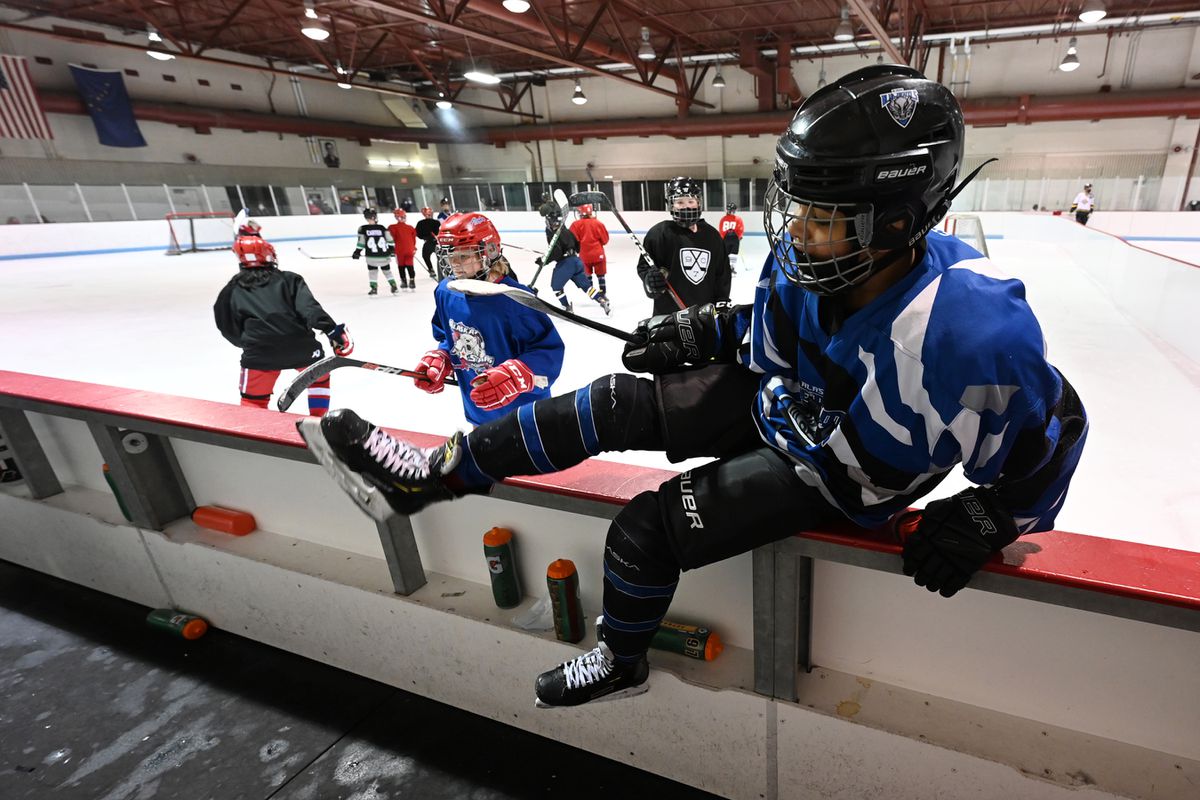 Tavian Mukaabya, 12, hops over the boards during a line shift Sunday at the Save Seawolf Hockey clinic at the Dempsey Anderson Ice Arena. (Bill Roth / ADN)

Tavian Mukaabya, 12, hops over the boards during a line shift Sunday at the Save Seawolf Hockey clinic at the Dempsey Anderson Ice Arena. (Bill Roth / ADN)

Hockey has been rough this year on the Mukaabya family of Palmer.

In February, 16-year-old Malachi and 12-year-old Tavian were thrown more than 200 feet in a car accident that happened on the Glenn Highway while Malachi was driving Tavian to a game in Anchorage. Malachi wasn’t hurt but Tavian broke his arm, needed surgery and missed the rest of the season.

Not long after that, Malachi lost a front tooth while celebrating a state championship with his Valley Thunder Tier II 16U team. The tooth got knocked out as he and his teammates dogpiled on the ice.

Both things hit mom Tiffany Muykaabya hard financially. And not being able to play hockey hit Tavian hard. By the time he got his cast off April 13 and was able to skate again, the season was over for the Blue Devils 12U team, so his mom looked for other chances to get him back on ice.

She knew there was a Save Seawolf Hockey youth camp this weekend at Dempsey Anderson Ice Arena that cost $100 she really couldn’t spare, but she checked it out anyway. It was sold out. Then she learned there were some scholarship spots available, so she told Tavian’s story in a letter to camp organizers.

Tavian was awarded a spot in the camp, and he scored four goals Sunday during small-area games that capped three days of instruction. He was one of 124 kids who participated in the camp, which raised about $10,000 for Save Seawolf Hockey.

In her letter to camp organizers, Tiffany Mukaabya touched on one of the things Save Seawolf Hockey hopes to preserve as it works toward raising the $3 million needed to save the UAA hockey program from elimination. The group recently passed the $2 million mark and is about $900,000 away from its goal, which must be met by Aug. 30.

Tiffany was working on a master’s degree in special education at UAA 10 years ago when she had to grab a book at the bookstore. The Seawolves practice in the same building, so Malachi and Tavian watched hockey while their mom went to the bookstore.

Scott Allen, a forward from Edmonton, was a freshman with the Seawolves, and something about him drew Tavian’s attention. The family stayed till the end of practice to say hi to players as they left, and Tavian wound up meeting Allen.

Allen became a mentor to Tavian, whose bedroom wall is home to one of Allen’s sticks and one of his UAA jerseys, on which Allen wrote, “To my No. 1 fan.”

Tavian didn’t miss a UAA home game during Allen’s four seasons, and several years later, they’re still in touch. Allen is playing professionally in Germany, and at 6 a.m. Sunday, Tiffany woke up her son so they could watch him play online.

Over the years, countless UAA hockey players have forged connections to Alaska kids like the one between Tavian and Allen. Many have gone on to become youth coaches like Matt Shasby, one of the directors of the weekend camp.

Tiffany Mukaabya wants to see the Seawolves survive because she’s seen first-hand the impact a college team can have.

“Scott’s sophomore year, I got divorced and he really stepped up and was just an awesome role model,” she said. “We have a relationship with Scott’s parents. We’ve stayed connected through the years.”

Tavian, a sixth grader at Palmer Middle School, showed little sign of impairment in his return to the ice. He broke the radius and ulna in his right arm, and he shoots right, but he said the arm felt good after each on-ice session.

He fell on the arm Sunday, sending Tiffany to the glass in panic, but all was well. “My elbow pad saved me,” Tavian said.

Tavian was wearing all-new gear, because his old gear was cut to shreds by EMTs who treated him at the scene of his Feb. 25 car accident. Tavian’s Blue Devils team, which is part of the Mustang Hockey Association, collected $700 to replace the pants, pads, jersey and other gear Tavian was wearing (hockey’s COVID-19 protocols require kids to be in full uniform when they enter the arena).

The single-vehicle accident happened when Malachi fell asleep at the wheel and drove off the highway between Eagle River exits. Malachi had played a hockey game that morning, “and he failed to tell me he was tired,” his mom said. Tiffany didn’t drive Tavian to Anchorage that day because she had to take her 10-year-old, Malik, to his game.

The Chevy Suburban hit three poles and more than 20 trees, Tiffany said. A bystander found a cell phone at the scene and dialed the number that said “Mom” with the news.

“It was heart-stopping,” Tiffany said.

At the hospital, Malachi was so distraught his actions had injured his brother that he was administered medication for anxiety. Then he found the Blue Devils game on Facebook Live and held up the phone so his brother could watch it. Hockey may have been rough on the Mukaabya family this year, but it’s also helped them heal.