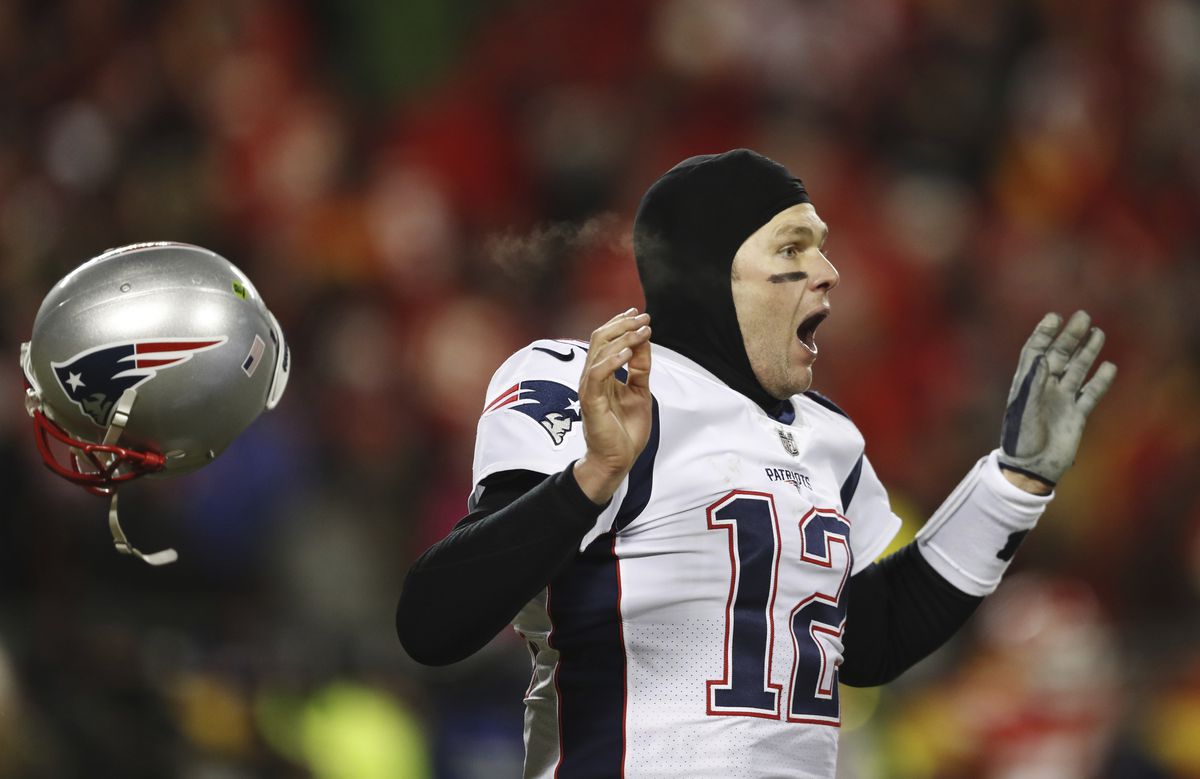 KANSAS CITY, Mo. - This time, the New England Patriots' dynasty traveled well. The Patriots came to the home of the AFC’s top seed Sunday, and for a half, they quieted the NFL’s highest-scoring offense and kept the league’s likely MVP in check. They traded touchdowns with the Kansas City Chiefs down the stretch.

And they advanced to yet another Super Bowl by outlasting the Chiefs in a 37-31 overtime win at Arrowhead Stadium in the AFC championship game.

The Patriots will meet the Los Angeles Rams on Feb. 3 in Atlanta in their ninth Super Bowl with Bill Belichick as their coach and Tom Brady as their quarterback. They will be seeking their sixth Super Bowl triumph of the Brady-and-Belichick run.

Running back Rex Burkhead's 2-yard touchdown run 4 minutes 52 seconds into overtime won it for the Patriots.

Their performance Sunday wasn't flawless. Brady threw two interceptions. Wide receiver Julian Edelman came oh so close to muffing a punt, being saved by an instant replay review that overturned a Chiefs recovery, and had a Brady pass clank off his hands for a pick on the ensuing drive.

But the Patriots were good enough. They controlled the first half. They had leads of 14-0 and 17-7. They fell behind, 21-17, on Chiefs quarterback Patrick Mahomes' third touchdown pass of the game. The Patriots reclaimed the lead with a little more than three and a half minutes to play in regulation on a 10-yard touchdown run by running back Sony Michel on a fourth-and-1 play. The Chiefs moved in front, 28-24, on a touchdown run by Damien Williams.

Burkhead's 4-yard touchdown gave the Patriots the lead again with 39 seconds to go. The Chiefs forced overtime with a 39-yard field goal by kicker Harrison Butker with eight seconds left. But the Patriots got the ball first in overtime and drove, virtually unimpeded, to the winning touchdown.

The Patriots took more than eight minutes off the clock with a 15-play drive to begin the game. That march culminated with a 1-yard touchdown run by Michel. Mahomes barely spent any time on the field during a first quarter in which the Patriots had the ball for more than 12 and a half minutes.

But with the Patriots on the doorstep of another touchdown, on a third-and-goal play from the Kansas City 1-yard line early in the second quarter, and with the Chiefs unable to stop the run, New England did the inexplicable and threw a pass. Brady had gone 237 straight postseason passes without a pick. But this time, while aiming for tight end Rob Gronkowski in the end zone, Brady threw the ball directly to Chiefs linebacker Reggie Ragland for an interception.

The Chiefs finally got moving on offense late in the first half, with Mahomes finding wide receiver Tyreek Hill for a 42-yard completion. But Mahomes overthrew a wide-open Williams for what should have been a touchdown, and the Chiefs punted after a third-down sack. The Patriots cashed in with a 90-yard drive capped by Brady's 29-yard touchdown pass to wide receiver Phillip Dorsett 27 seconds before halftime.

Things changed after halftime, when Mahomes again started to resemble the magician that he was during the regular season. He lofted a beautiful pass down the field while rolling to his right for a 54-yard connection to wide receiver Sammy Watkins. That set up a touchdown on a dart of a throw to tight end Travis Kelce on a slant pattern.

The Patriots got a 47-yard field goal by kicker Stephen Gostkowski to raise their lead to 10 points, at 17-7, later in the third quarter. But the Chiefs drew to within 17-14 in the fourth quarter on Mahomes' 1-yard touchdown toss to Williams, set up by a pass interference call against the Patriots in the end zone.

The Chiefs stopped the Patriots on a fourth-down bid but would punt. The Patriots caught a major break when the officials ruled after a replay review that the ball had not touched Edelman; the punt returner stood in front of a by-then-rolling ball. Edelman’s good fortune did not last long. He had the ball bounce off his hands on a pass from Brady. The carom went to safety Daniel Sorensen for an interception, setting up Mahomes’s 23-yard touchdown to Williams on a swing pass.