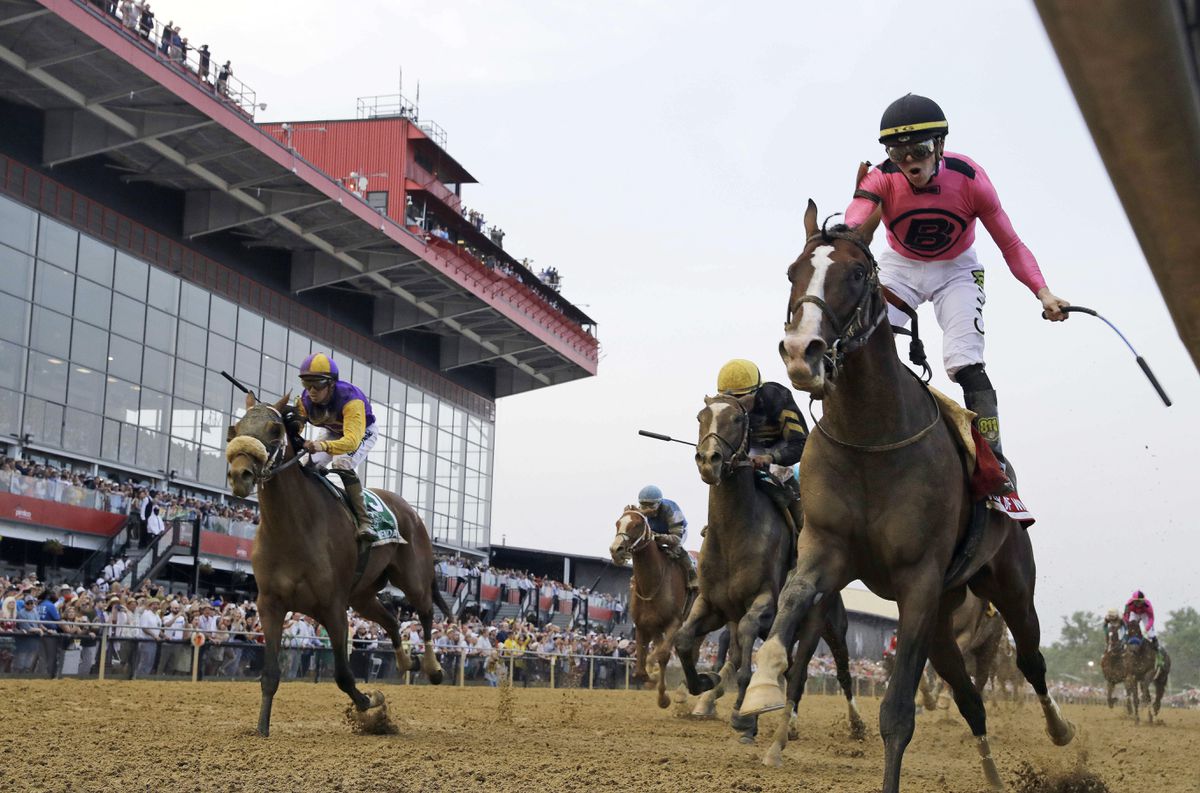 Jockey Tyler Gaffalione, right, reacts aboard War of Will, as they crosses the finish line first to win the Preakness Stakes horse race at Pimlico Race Course, Saturday, May 18, 2019, in Baltimore.(AP Photo/Steve Helber)

Jockey Tyler Gaffalione, right, reacts aboard War of Will, as they crosses the finish line first to win the Preakness Stakes horse race at Pimlico Race Course, Saturday, May 18, 2019, in Baltimore.(AP Photo/Steve Helber)

BALTIMORE — War of Will bounced back from a bumpy ride in the Kentucky Derby to win the Preakness Stakes on Saturday, holding off a field that included a riderless horse that threw his jockey out of the gate and kept running.

Trainer Mark Casse got his first Triple Crown victory, with War of Will unfazed starting from the inside No. 1 post position for the second consecutive race. War of Will endured a rough trip and was interfered with in the Kentucky Derby, which led to first-place finisher Maximum Security being disqualified.

Casse was just thankful War of Will didn't go down in the Derby, which could've been a multihorse catastrophe.

"This is even I think probably more special given everything that we've been through," Casse said. "I'm not even calling it redemption. I didn't feel like he got his fair shot, and that's all I wanted — a fair shot. And he showed what he had today."

Bodexpress threw Hall of Fame jockey John Velazquez just out of the starting gate but still finished the race and did an extra lap around the Pimlico track. An outrider tried to swoop in at the top of the stretch and corral Bodexpress, but the horse sped up and passed a few competitors near the finish line — and kept going. Technically, Bodexpress gets a did-not-finish.

"He wasn't behaving well," said Velazquez, who added he's fine and would not seek medical attention. "When the doors opened, I was off right from the start and he kind of jumped sideways, and I had my feet out sideways and I lost my balance and went out."

War of Will made a move around the final turn led by jockey Tyler Gaffalione and didn't relent down the stretch. Hard-charging late addition Everfast came in second and Owendale third.

Casse, 58, entered a horse in the Preakness for the fifth time and came closest two years ago when Classic Empire finished second.

"I'm just very happy for Mark to get his first Classic win," Gaffalione said. "Very happy for the horse. He deserved it more than anything. He's so special."

It's also a breakthrough for Gaffalione, who has become something of a rising star since being named top apprentice rider in 2015. Gaffalione, 24, was aboard War of Will for the colt's sixth consecutive race and came away with the biggest victory of his young career.

"It really hasn't even hit me yet," he said. "I can't even put it into words.

Bob Baffert-trained Improbable was beaten as the favorite for the second consecutive Triple Crown race. Improbable finished sixth in the 13-horse field that was the biggest at the Preakness since 2011.

It was the first Preakness run without the Kentucky Derby winner since 1996 — this time without the horse that crossed the finish line first and the long-shot Country House who was elevated to first after Maximum Security was disqualified for interference. Go back to 1951 for the last time the Preakness was run without the top four finishers from the Derby.

The race was run at a tumultuous time for horse racing.

After 23 horse fatalities at Santa Anita Park over a three-month span, there was another in training Friday, and a filly collapsed and died after a race at Pimlico on Friday. Then there was the disqualification of Maximum Security at Churchill Downs and the ensuing lawsuit filed by owners Gary and Mary West and suspension handed down to jockey Luis Saez.

In Maryland, the Stronach Group that owns the track — and also Santa Anita — is embroiled in an ongoing quarrel with local politicians over the future of the Preakness being at historic but aging Pimlico or the owners' favored Laurel Park about 30 miles south. More than 6,000 grandstand seats were cordoned off because they were deemed unsafe, and a water main break disrupted preparations for the event and left a lack of running water on race day.

All over the country, horse racing is fending off a threat to its very existence in the form of legalized sports gambling. Yet the Maryland Jockey Club reported a record attendance and amount bet on Black-Eyed Susan Day on Friday.