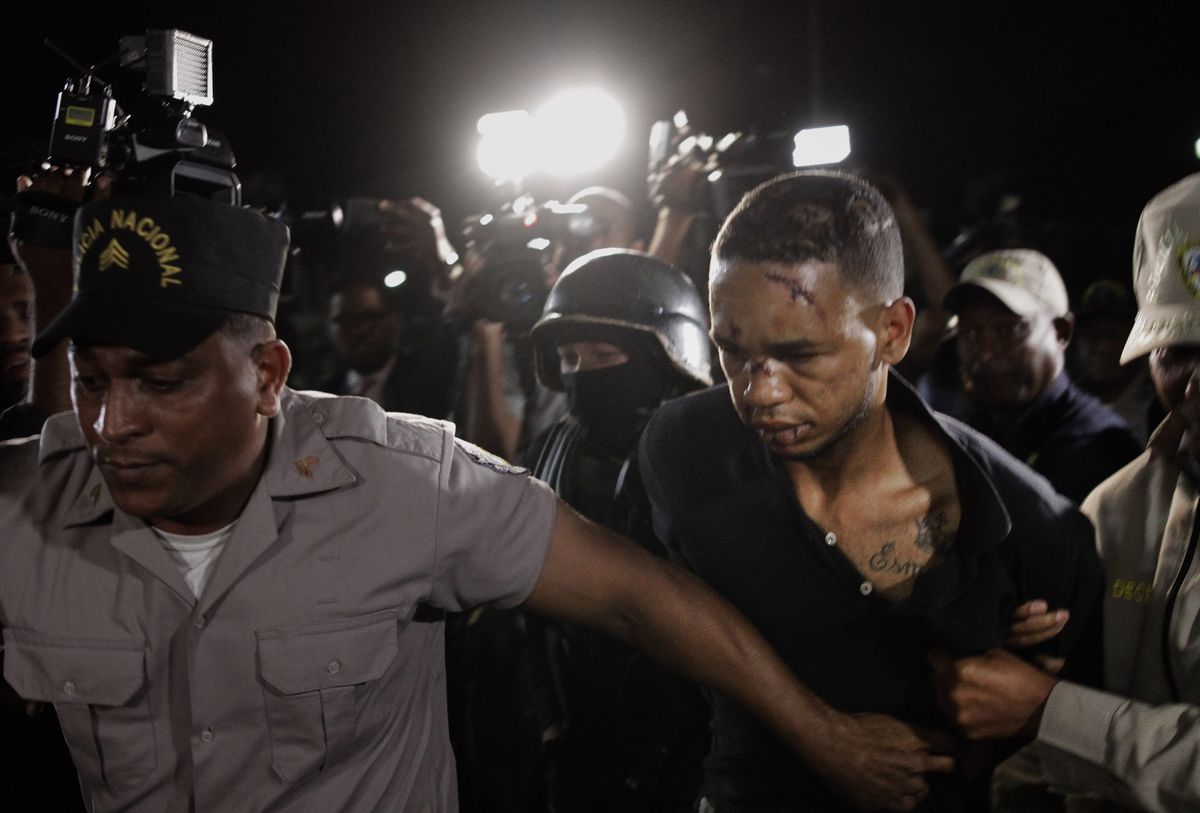 Eddy Vladimir Feliz Garcia, in custody in connection with the shooting of former Boston Red Sox slugger David Ortiz, is transferred by police to court in Santo Domingo, Dominican Republic, Tuesday, June 11, 2019. His lawyer Deivi Solano said Feliz Garcia had no idea who he'd picked up and what was about to happen, and that he expected Feliz Garcia would be charged as an accomplice to an attempted murder. (AP Photo/Roberto Guzman)

Eddy Vladimir Feliz Garcia, in custody in connection with the shooting of former Boston Red Sox slugger David Ortiz, is transferred by police to court in Santo Domingo, Dominican Republic, Tuesday, June 11, 2019. His lawyer Deivi Solano said Feliz Garcia had no idea who he'd picked up and what was about to happen, and that he expected Feliz Garcia would be charged as an accomplice to an attempted murder. (AP Photo/Roberto Guzman)

SANTO DOMINGO, Dominican Republic — An alleged gunman and five accomplices have been detained in the shooting of former Red Sox superstar David Ortiz, Dominican officials said Wednesday, while providing no information about why a group of young men would try to kill their country’s most beloved sports hero.

Four other suspects were also being pursued in the shooting, which witnesses said was carried out by two men on a motorcycle, assisted by two other groups of people in cars.

"At this moment, they are being interrogated and we will continue deepening the investigation to get to the truth about what happened," Chief Prosecutor Jean Alain Rodríguez said.

"Nobody involved in this unfortunate episode will escape justice, neither those who carried it out nor the mastermind," he said.

The national police director, Maj. Gen. Ney Aldrin Bautista Almonte, said the coordinator of the attack was offered 400,000 Dominican pesos, or about $7,800, to orchestrate the shooting. He said the alleged coordinator was also among those in custody.

Rodríguez and Bautista declined to give a motive for the shooting at a popular Santo Domingo bar Sunday night or say who had hired the attackers.

They promised, however, that all those who targeted Ortiz in the baseball-crazy Caribbean country would be brought to justice.

"We recognize the symbolism that David Ortiz represents, and we promise that this case will be cleared up completely," Bautista said.

Ortiz is one of the most beloved figures in sports history in the Dominican Republic and Boston, a fearsome power hitter with a ready smile. The slugger known as Big Papi led the Red Sox to three World Series championships, was a 10-time All-Star and hit 541 home runs.

The Red Sox retired his number, 34, in 2017 — a year after he retired — and Boston renamed a bridge and a stretch of road outside Fenway Park in his honor. He maintains a home in Weston, on the outskirts of Boston.

Ortiz galvanized the city in the aftermath of the 2013 Boston Marathon bombing that left three people dead, bellowing through a megaphone at Fenway Park: “This is our (expletive) city!”

While Ortiz lived in Boston, he visited the Dominican Republic at least six times a year, where he crossed paths with a wide variety of figures from the country's legitimate and illegal business worlds, according to friends.

Ortiz studiously avoided mixing with shady characters, but a law-enforcement official said on condition of anonymity that officials were investigating whether Ortiz may have formed some relationship or acquaintance during a trip here that, without his knowledge, set off the chain of events leading to his shooting.

Among the suspects in custody was the alleged shooter, identified by authorities as Rolfy Ferreyra, aka Sandy, a skinny, tattooed 25-year-old who officials said had confessed to the shooting.

In a statement, officials said the weapon used, a Browning Hi Power semi-automatic pistol, had been handed to suspect Oliver Moises Mirabal Acosta, then to suspect Porfirio Allende Dechamps Vasquez, AKA The Kid, who buried it in the garden of his home.

Both men have been arrested and the gun has been recovered.

Also under arrest were Joel Rodríguez de la Cruz, aka Squiddy; Reynaldo Rodríguez Valenzuela, aka The Chinaman; and the suspected driver of the motorcycle, Eddy Vladimir Feliz García, aka The Package.

Many were caught in the same clothes they were seen wearing on surveillance video, Bautista said.

The four suspects still at large were identified as Luis Alfredo Rivas Clase, aka The Surgeon, as well as a woman known as The Venezuelan, or Red, and two other men, prosecutors said in a statement.

Meanwhile, in Boston, Ortiz's wife said in statement that the former Red Sox slugger was able to sit up and take some steps as he recuperates in the intensive care unit at Massachusetts General Hospital.

"His condition is guarded, and he will remain in the ICU for the coming days, but he is making good progress toward recovery," Tiffany Ortiz said in the statement.

Prosecutors said security camera footage showed two men on the motorcycle talking with other people in a gray Hyundai Accent and in another Hyundai in a nearby street before the shooting.

One of the suspects, Mirabal Acosta, was seen driving the Accent before mounting a motorcycle driven by the 25-year-old Feliz García, the prosecutors said in a court document.

"In one of the videos it was possible to observe both the accused and the shooter planning the commission of the incident," the prosecutors said.

The document also revealed ineptitude, saying the motorcycle driver was captured after he skidded and fell off his bike as the pair tried to flee. Enraged fans captured García and beat him bloody before handing him over to police.

Mirabal Acosta was captured Tuesday night in the town of Mao in the northern Dominican Republic.

García's lawyer said his client, who has been charged with being an accomplice to attempted murder, is an innocent motorcycle taxi driver who had no idea his passenger was going to commit a crime.

"He didn't know what they were going to do. He's a fan of David's," the attorney, Deivi Solano, said Tuesday.

Ortiz's father and a sister live in Santo Domingo and the 43-year-old former Red Sox great was active on the social scene here, hitting nightspots with friends who included TV personalities and Dominican reggaeton musicians.

Beloved in his hometown, Ortiz traveled the dangerous streets of the Dominican capital with little or no security, trusting his fans to protect him, according to friends.