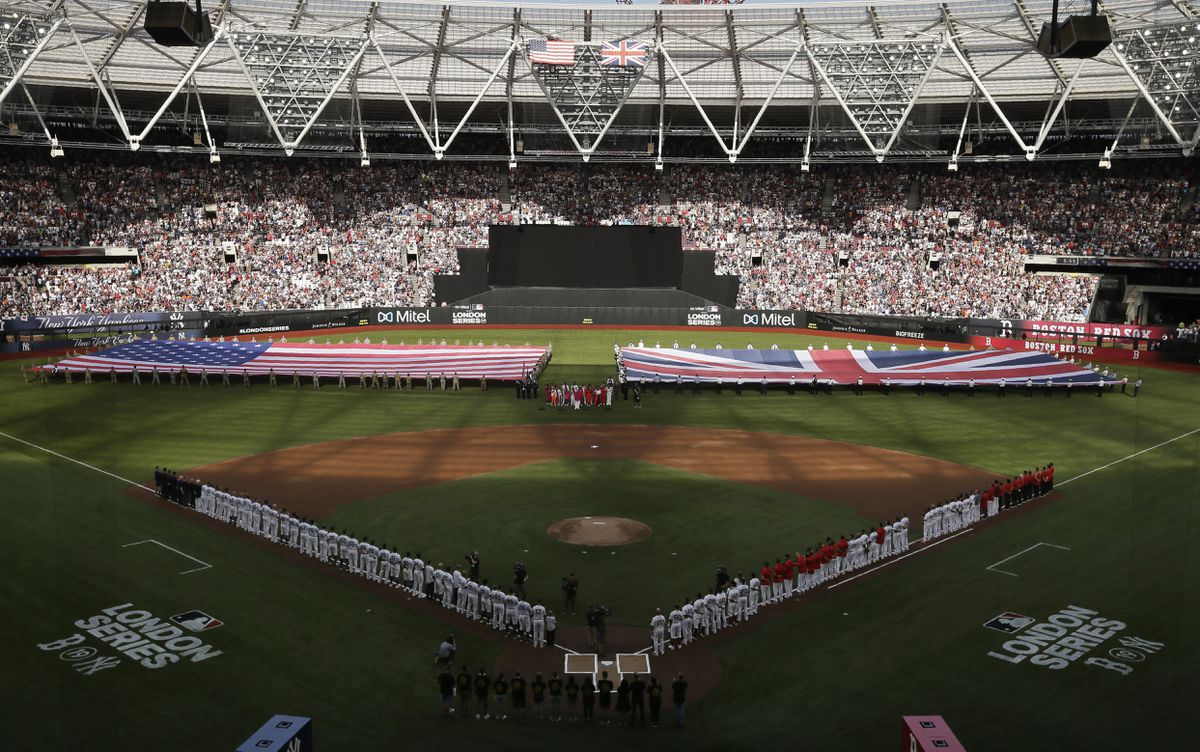 LONDON — Rest assured, British fans: Most baseball games are not like this, not even the crazy ones between the New York Yankees and Boston Red Sox.

Major League Baseball arrived in Europe on Saturday night with Ye Olde Slugfest. Each team scored six runs in a first inning that lasted nearly an hour, with Aaron Hicks hitting the first European homer . Brett Gardner had a tiebreaking, two-run drive in the third, Aaron Judge went deep to cap a six-run fourth and the Yankees outlasted their rivals 17-13 in a game that stretched for 4 hours, 42 minutes — 3 minutes shy of the record for a nine-inning game.

"Well, cricket takes like all weekend to play, right? So, I'm sure a lot of people are used to it," Yankees manager Aaron Boone said. "We should remind them there's not 30 runs every game."

Before a sellout crowd of 59,659 at Olympic Stadium that included supporters from Britain, Beantown and the Big Apple plus royalty, batters behaved like good tourists and minded the gaps — and the fences. As a Union Jack fluttered above center field along with the Stars and Stripes, both teams jacked and jacked and jacked.

"I think we're getting as good a reception as football has for the last couple years," Yankees first baseman Luke Voit said.

AL batting leader DJ LeMahieu had four hits and five RBIs , including a three-run double in the fourth and a two-run single in the fifth that opened a 17-6 lead. Voit had four hits, including three doubles, before leaving with a left abdominal injury in the fifth. He'll be evaluated before Sunday's series finale.

No British reserve with these offenses. Hicks was especially proud to hit the first homer.

"That's something they can never take from me," he said.

New York set season highs for runs and hits by the fifth inning and outhit Boston 19-18 overall as both teams batted around twice. The 30 runs were the most in a big league game since Boston beat Baltimore 19-12 last Aug. 10, according to STATS.

"Definitely the biggest crowd I've played in front of. The loudest, as well," Chavis said. "With the overhang, there was kind of an echo."

Jackie Bradley Jr. had four hits, including a home run . Boston shortstop Xander Bogaerts left in the eighth after calf muscles in both legs cramped , then said he should be available Sunday.

Boston starter Rick Porcello and New York's Masahiro Tanaka got hammered — fittingly in the home of the Premier League soccer club West Ham, nicknamed the Hammers. Neither got out of a first inning that lasted 58 minutes and included 20 batters and 94 pitches. It took 1:51 to play the first three innings and 2:58 for 4½, but unlike in cricket, the teams did not break for tea.

Zack Britton retired Marco Hernandez on a bases-loaded grounder that ended the eighth, and Sam Travis hit into a game-ending double play against Aroldis Chapman on the 422nd pitch.

"The stadium, the atmosphere, just looking up into the outfield and seeing all those people there, it is pretty special to play out there," LeMahieu said.

New York won for the 12th time in 13 games, maintained a seven-game lead over second-place Tampa Bay in the AL East and reached the halfway mark at 53-28, one fewer win than at last year's midpoint. The defending World Series champion Red Sox dropped a season-high 10 games back at 44-39.

The 2,200th regular-season meeting between the teams was a scorcher — the hottest day of the year in London at 93 degrees Fahrenheit (34 Celsius), and still 92 when the first pitch was thrown at 6:10 p.m. And it was the first on artificial turf.

While Boston was the home team and hit last, both teams wore their white home uniforms. Prince Harry and wife Meghan Markle, the Duchess of Sussex, met with both teams and took part in the ceremonial first pitch ceremony. Former New York City Mayor Rudolph Giuliani was on hand, as he was when the Yankees played Tampa Bay at the Tokyo Dome in 2004.

"I got chills from our intros coming out," Judge said.

Organizers brought touches of home, such as the grounds crew dancing to the Village People's "YMCA." The sound system played "Sweet Caroline" in the eighth and "New York, New York" after the final out.

But there were misfires, too. When Gary Sánchez struck out in the second, music was played that usually follows a New York run being scored at Yankee Stadium.

Porcello got just one out in the shortest of his 324 career starts.

"I couldn't execute the pitches," he said. "There's no excuse for it. It was an unacceptable performance."

Tanaka got two outs as he failed to finish the first inning for the first time in 149 major league starts. It was the first time in the rivalry that both teams scored six or more runs in the opening inning and the first big league game involving any teams in which that occurred since visiting Toronto led Oakland 7-6 on June 23, 1989.

Before all the runs, New York gave Prince Harry and Markle a Yankees shirt as a gift for their new son Archie,

"He said if we win, he's going to let the baby wear the shirt," Didi Gregorius said. "I hope he remembers that."

Yankees RF Mike Tauchman made a diving, backhand grab to rob Travis in the seventh.

Outfielders had trouble picking up balls because of white seats and tables of the white press tribune built for soccer, and also because of the late-setting European sun.

Yankees: RHP Domingo Germán is scheduled to return from a strained hip flexor and start Wednesday at the New York Mets, a day after LHP J.A. Happ starts the opener of the two-game Subway Series. LHP CC Sabathia will start in the following series at Tampa Bay. ... RHP Luis Severino (lat strain) had another setback and still has not thrown off a mound. Boone said an MRI showed the lat is about 90% healed and Severino probably will resume throwing in 5-7 days. ... RHP Dellin Betances (lat strain) probably will resume throwing next week.

Red Sox: LHP Brian Johnson was put on the 10-day IL because of an unspecified medical matter not related to baseball.