The World Cup has been a smash. But women’s soccer still craves an elusive goal: lasting impact 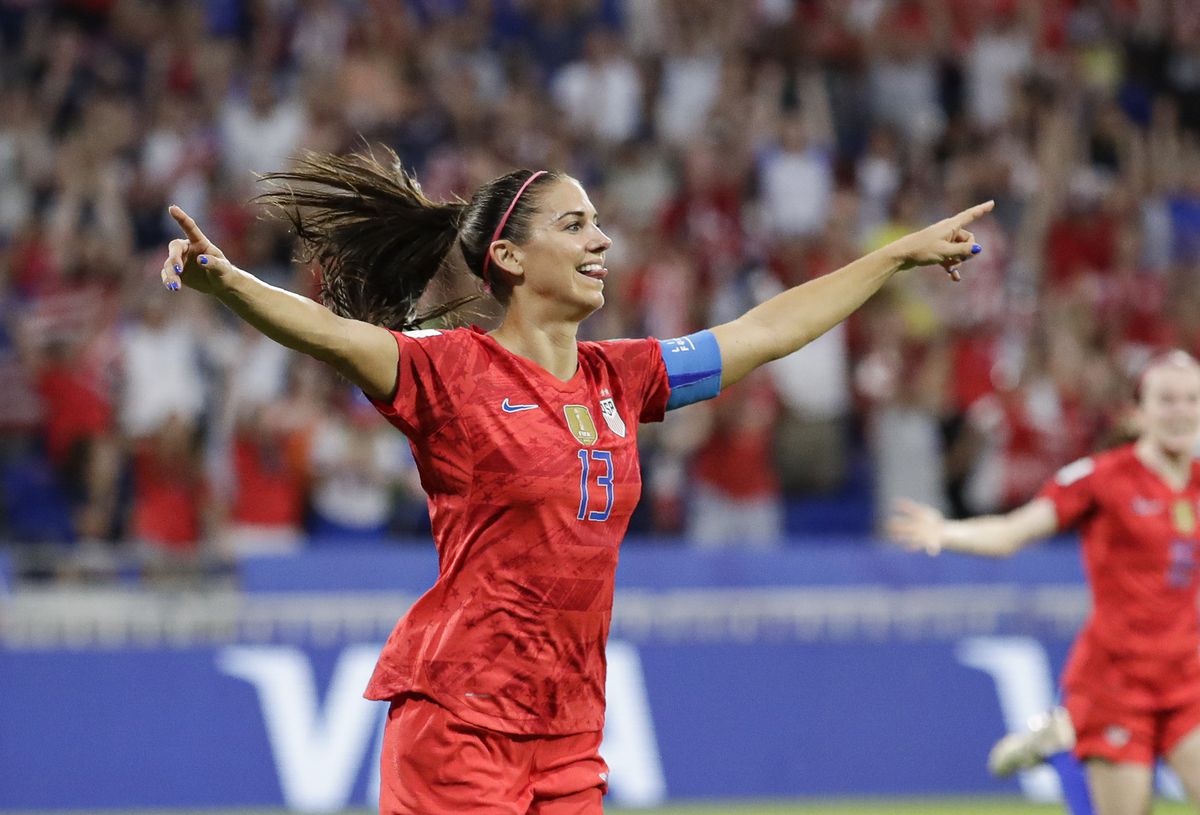 LYON, France - When 90,185 fans jammed into the Rose Bowl in Pasadena, California, to revel in the United States’ heart-stopping victory over China for the 1999 Women’s World Cup title, it was hailed as a watershed moment.

Cheered by a cultlike following that grew each round of the tournament, Mia Hamm, Brandi Chastain and their teammates were shooting stars who seemed destined to put women's soccer center-stage - and keep it there - for years to come.

Meantime, soccer-mad countries in Europe and South America yawned. Even in America, the mania over women's soccer proved as fleeting as Reebok Pumps and Starter jackets. Two women's pro leagues were launched and folded in the 12 years that followed, while fan interest waned more than waxed between subsequent World Cup and Summer Olympic cycles.

But here in France, where the 2019 Women's World Cup will conclude with Sunday's final between the three-time and defending champion United States and the Netherlands, there are signs that the sport's watershed moment may finally have arrived.

Throughout much of the world, it has long been implicit that women's soccer is inferior, if not an outright waste of time. England deemed it such an affront that girls and women were forbidden from playing on proper pitches until 1971.

But according to the BBC, the broadcast of Tuesday's Women's World Cup semifinal between third-ranked England and the top-ranked Americans drew 11.7 million viewers at its peak, making it the network's most watched television program of the year. That audience reflected a 50.8% share, meaning that half of all TVs in Britain in use at the time were tuned to the match.

Said England coach Phil Neville, following his team's 2-1 defeat: "When you get a moment like this - like we've had [since the tournament's June 7 kickoff] - that will inspire the grass-roots coaches, helpers, volunteers, the kids to go out here and buy a pair of boots and play football."

In the Netherlands, just more than 5 million people watched Wednesday's semifinal against Sweden, which translates to nearly one-third (31.6%) of potential Dutch TV viewers.

TV ratings for women's soccer also set records in countries whose teams advanced to the knockout round, including France, Brazil and Italy.

Said Italy's coach, Milena Bertolini: "I know cultural changes take a lot of time, but this team are able to break down some of those prejudices. That's their mission."

In France, coach Corinne Diacre declared that despite Les Bleues' quarterfinal loss to the United States, "We have won hearts and minds."

The question is, as this exceptionally well played World Cup comes to an end: Is this uptick in global interest sustainable, signaling the start of a new era in which women's soccer - not just in the United States, but throughout Asia, Africa and Europe - will start attracting the paying fans, corporate investors and media coverage that are the lifeblood of professional sports?

Or is it a spike amid the doldrums of a sweltering European summer?

In the United States, there are several encouraging signs.

Nike announced last week that sales of the U.S. women's national team jerseys are the top-selling soccer jersey, male or female, ever sold on the apparel maker's website in one season.

Just more than 7 million tuned in for the Fox broadcast of the U.S.-England semifinal, making it the most watched soccer match on English-language U.S. TV since the 2018 World Cup final.

Another 1.02 million tuned in via Telemundo, NBC Sports Network and the networks' respective apps, making it the most watched, non-final FIFA Women's World Cup match in Spanish-language television.

In hopes of leveraging that momentum, ESPN announced on Thursday that it will broadcast 14 games of the professional National Women's Soccer League, including the league's October semifinals and 2019 championship. All 23 members of the U.S. women's World Cup squad compete in the NWSL.

To U.S. midfielder Lindsey Horan, the broadcast deal is overdue.

"I was pretty annoyed we didn't have a deal at the beginning of the year. It was as if we were going backward," said Horan, 25, who plays for the Portland Thorns, one of nine NWSL franchises.

To defender Kelley O'Hara, who's competing in her third World Cup, it's exactly what's needed to keep the NWSL viable in its seventh season and beyond.

"Eyeballs are important, and representation is important," said O'Hara, 30, a Stanford graduate who competes for the Utah Royals. "For ESPN to have NWSL on their channels, that's important. I think we need more of that. We need that representation to be able to be seen."

Elsewhere in the world, TV ratings for the knockout rounds have set record marks, too.

In Brazil, 35 million watched Marta and her Brazilian teammates' round-of-16 match against France - more than had ever tuned in for a Women's World Cup match in the country that claims authorship of "the beautiful game."

For England's Lionesses, the record TV ratings were a tremendous boost as they made their way to their second consecutive World Cup semifinal, said captain Steph Houghton. So, too, was the turnout of England fans at Stade de Lyon for the match against the United States.

"For us to be able to attract that many people to come watch us - and to watch us back home, all over the world, is unbelievable for the sport," Houghton said.

The tournament's other semifinal, which pitted the Netherlands and Sweden, drew a throng of 20,000 Dutch fans, who took Lyon like an orange-clad army, brandishing musical instruments and song, to cheer the European champions to their first World Cup final.

But will all this fizzle once Sunday's champion is crowned?

JP Dellacamera, the Hall of Fame play-by-play announcer for Fox Sports, recalled hoping that the 2015 Women's World Cup in Canada would serve as the breakthrough moment for women's soccer. It didn't.

"Everyone is talking about how great this World Cup has been, but it's almost like when you hire a new coach, you get that coach 'bump,' " Dellacamera said Friday. "When we go home, will that bump reflect in NWSL attendance? In NWSL ratings, now that they've got a deal at ESPN? That remains to be seen."

No doubt, the promise of women's soccer has looked bright before, only to fade.

Veteran sports agent Leigh Steinberg has thoughts about why this Women's World Cup might be different. Although known primarily for representing NFL quarterbacks and as the inspiration for the fictional Jerry Maguire, Steinberg represented the U.S. men's soccer team in 1994. The experience, he said, led him to explore a puzzling disconnect: Why does the first sport that millions of Americans play as children fail to hold their interest, years later, as adult sports fans?

Steinberg's theories were many: Americans like sports that are high scoring or, failing that, include success or failure on every play, such as in an at-bat in baseball or a "drive," in football; Americans also like sports with intense action, punctuated by commercial breaks every 20 minutes or so.

Social-theory aside, Steinberg has been following the 2019 Women's World Cup on TV and believes "this one has a real chance," as he puts it, of representing a breakthrough.

For starters, he notes, the media landscape is radically different than it was 20 years ago.

The explosion of cable networks has created endless sports-programming needs to fill. The athletes who perform well in this World Cup will be sucked into what Steinberg calls the "celebrity-making machine" of endorsements, the ESPY awards, late-night television and web-based programming that transcends hardcore fans. Once minted as mainstream stars, they ought to have greater drawing power when they return to the NWSL or other pro teams.

Steinberg also sees a synergy between the U.S. women's team's success and the MeToo movement, with their achievements on the soccer field, regardless of who wins Sunday's final, coming amid a time of heightened women's consciousness.

Finally, there is the behemoth of social media, virtually nonexistent when Chastain ripped off her shirt upon clinching the 1999 World Cup with her penalty kick. With it, she turned chiseled muscles and sports bras into a statement of female empowerment as the image was relayed around the world via photographs and magazine covers.

Today, social media does that instantaneously.

"This World Cup has caught fire here in America," Steinberg said. "The amount on Twitter alone of Alex [Morgan] breaking out her tea cup went viral. This is not just affecting people who go to soccer games. This is massive."

Twitter's own data support the point. In the United States, all of its top-10 trending topics after Tuesday's U.S.-England semifinal match were about the game, according to a Twitter official.

Above all, what has made this Women's World Cup look promising for the sport's future is the elevated standard of play.

The defending champion United States may have reached the final for the fifth time in the tournament's eight editions, but the competitive gap has clearly narrowed with the likes of England, France and Spain - all of whom came close to knocking the Americans out in preceding rounds.

“There were a lot of good teams in 2015; I think there are more good teams now,” Ellis said. “It’s an awesome reflection of the growth of our game. As ambassadors of the game, the players and myself, that’s exactly where you want to be. You want it to be a game that you have to play as many good teams as possible.”