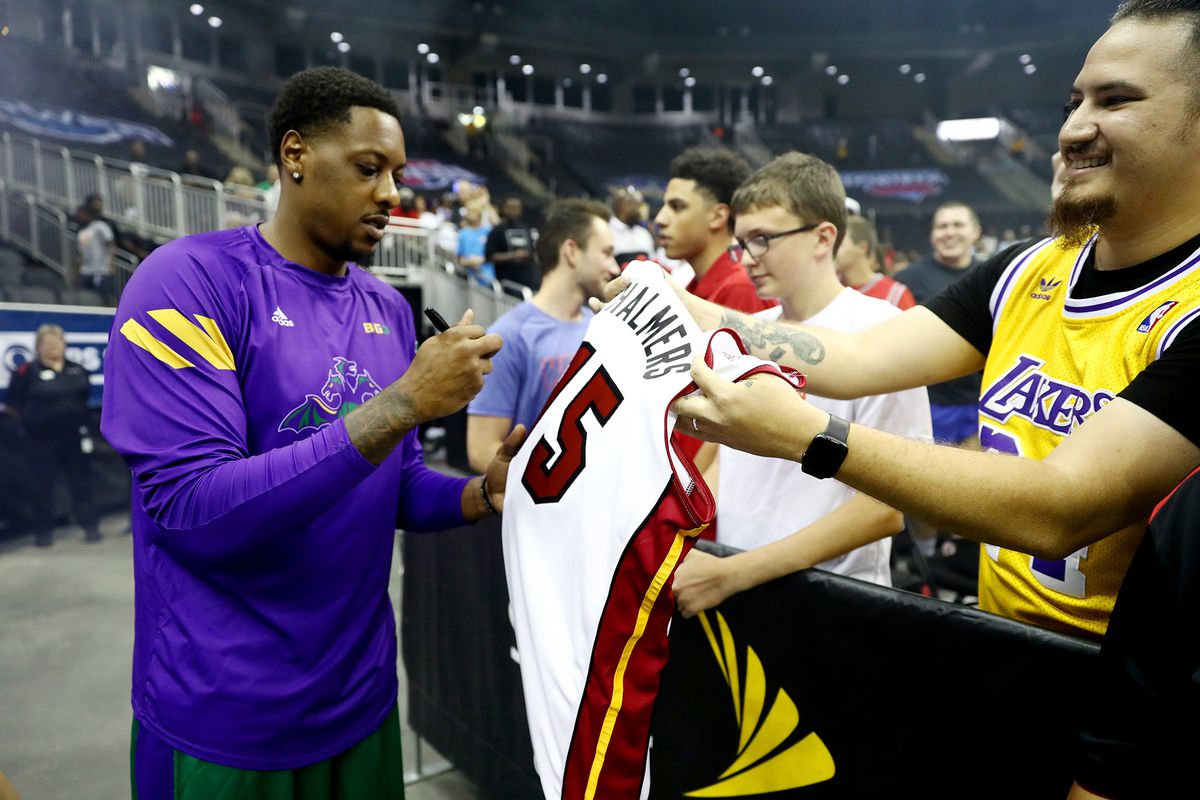 Mario Chalmers of the 3 Headed Monsters signs autographs prior to the Big 3 Games at Sprint Center in Kansas City, Mo., on July 20, 2019. (Jamie Squire/BIG3/Getty Images/TNS) **FOR USE WITH THIS STORY ONLY**

Mario Chalmers of the 3 Headed Monsters signs autographs prior to the Big 3 Games at Sprint Center in Kansas City, Mo., on July 20, 2019. (Jamie Squire/BIG3/Getty Images/TNS) **FOR USE WITH THIS STORY ONLY**

To the former Miami Heat point guard, it’s more a matter of staying active in the game until, like many, better work comes along.

That delivered Chalmers to AmericanAirlines Arena on Saturday night for the first time as a half-court player, part of the Big3’s nationally televised weekly tour.

At 33, five years removed from four consecutive runs to the NBA Finals with the Heat, this is not exactly where the former Kansas championship guard and 2005 Bartlett High School graduate expected to be.

“It’s still basketball. For me, it goes either way. I’d love to be back in the NBA, especially to get in my 10th year. But other than that, I just love to play basketball. That’s what it is for me.”

So instead of stepping away, the 2008 second-round pick had stepped up elsewhere, first winning a championship this past season in Italy and then signing on to play alongside former Heat teammate Rashard Lewis on a Big3 roster that also includes former NBA veterans Reggie Evans, Mahmoud Abdul-Rauf, Larry Sanders and Al Thornton.

“What made me decide was just a way to stay in shape, make a little money during the summer, make some connections with different people, being seen, being noticed playing basketball,” he said in advance of Saturday’s appearance on the AmericanAirlines Arena court he called home for eight seasons. “Hopefully it’ll work out for a better job next year.”

Had there not been a torn Achilles with the Memphis Grizzlies in 2016, there likely would have been an NBA career uninterrupted. Instead, he was forced to sit out the entire ’16-17 season before making it back for 66 games with the Grizzles in 2017-18.

And then the phone went silent, leading to last season’s international experience, with Virtus Bologna in Italy’s Serie A.

All the while there has been encouragement from former teammates who were along for those Heat championship runs, from Dwyane Wade to Udonis Haslem to Chris Bosh.

As have these weekly Big3 appearances, with many former Heat teammates part of the circuit.

“It makes it like reunions,” he said. “Actually it’s fun. It’s a good way to get out of the house, still do something productive, hang out with your friends.

“We’re still all about basketball. That’s one thing about a basketball player, we never fall out of love with the game. So any time we get a chance to play, and it doesn’t risk a lot of injury for us older guys, we’ll be out there.”