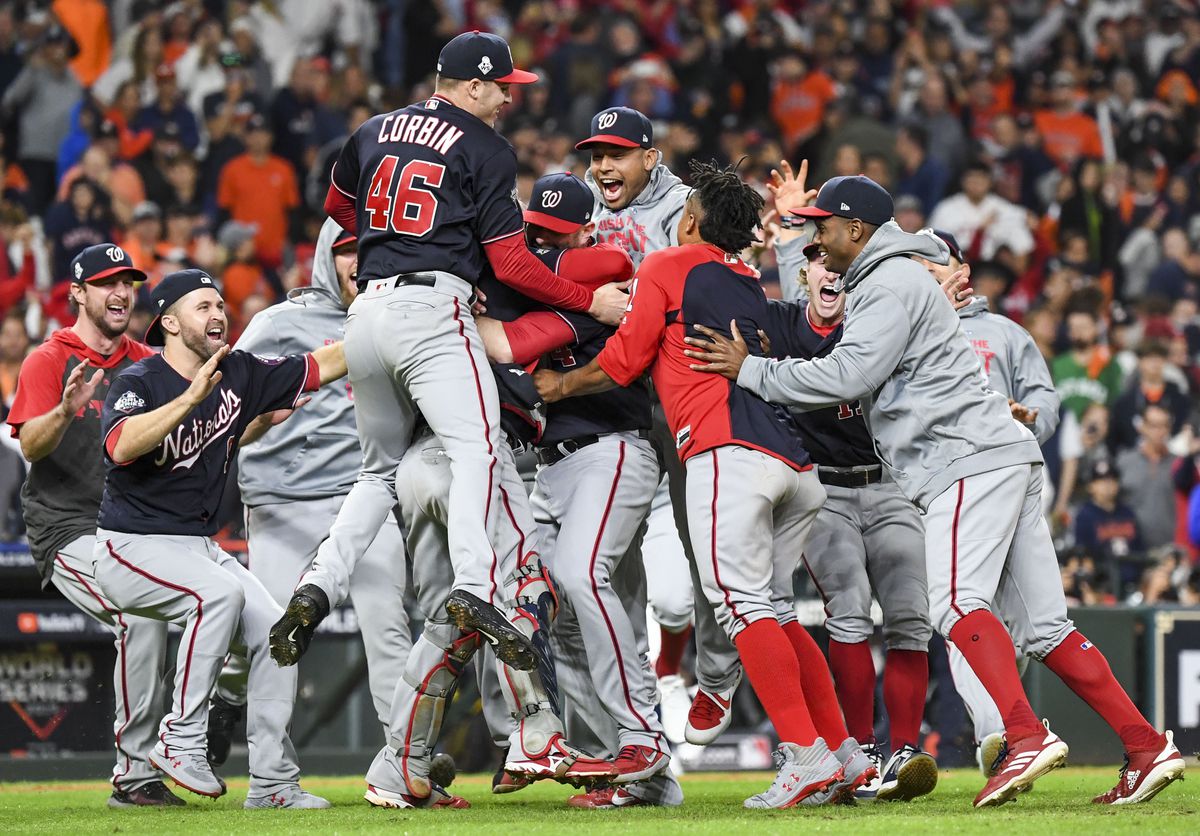 The Washington Nationals celebrate beating the Houston Astros, 6-2, in Game 7 of the World Series at Minute Maid Park on Wednesday night. MUST CREDIT: Washington Post photo by Jonathan Newton

The Washington Nationals celebrate beating the Houston Astros, 6-2, in Game 7 of the World Series at Minute Maid Park on Wednesday night. MUST CREDIT: Washington Post photo by Jonathan Newton

HOUSTON - Suddenly, it was all over, and the blue-jerseyed visitors were spilling and screaming out of every corner of Minute Maid Park - from their dugout along the third base line, the bullpen in left field, the expanse of outfield, all four corners of the diamond - and converging upon the joyous pile of humanity forming near the center. Once the Washington Nationals had no more giant mountains to climb, they took the small dirt hill of the pitcher’s mound, and they hugged and bounced.

With one more comeback win, at the end of a comeback season for the ages, the Nationals were World Series champions. A 6-2 victory over the Houston Astros in Game 7 on Wednesday night sealed it, delivering the first baseball title for the nation's capital since Walter Johnson's Senators won their only one, in 1924.

Having existed for the better part of five months as a decided underdog - their odds of making the World Series on May 24, when they were 19-31, were placed at 0.1 percent - the Nationals had come to live for the daily fight for their lives. And now, the fight is over.

Seventh-inning home runs by Anthony Rendon and Howie Kendrick - the former an MVP-caliber third baseman possibly playing his last game in a Nationals uniform, the latter a 36-year-old veteran in the deep autumn of his career - turned a slim deficit into a slim lead for the Nationals. A tacked-on run in the eighth and two more in the ninth provided some breathing room.

The final out, delivered by reliever Daniel Hudson, settled into catcher Yan Gomes's glove at 10:50 p.m. CDT, touching off the mad dash to the center of the diamond. A hushed crowd of 43,326 watched the visitors celebrate as the Astros slouched off the field.

And so ended the longest season in Washington baseball history - one that began on a chilly Thursday in late March, cratered in late May, caught fire in the summer months, tested hearts in September and careened through October like a wobble-wheeled wagon set free at the top of a steep hill. This Nationals season was a wild, screaming, impossibly long ride, one that carried Washington all the way to the doorstep of November.

Take a step back and consider what these Nationals accomplished: They notched all four of their wins in this series on the road, in the building where the Astros had the majors' best home record in 2019, and became the first team since the 2016 Chicago Cubs to take the World Series by winning Games 6 and 7 on the road. They out-hit an Astros offense that ranked among the most potent in history. They hung losses on the Astros' twin aces - Gerrit Cole in Game 1, Justin Verlander in 2 and 6 - and outlasted yet another Houston ace, Zack Greinke, on Wednesday night.

There had never been an October like this in the nation's capital, one so full of baseball and life. The last time a Washington team played in the World Series, the original Senators in 1933, it ended on Oct. 7. But in the current, expanded playoff format, with 10 teams and four rounds, this October stretched on for week upon glorious week - an exhilarating ride that took them from Milwaukee's Miller Park on the first night of the month to Houston's Minute Maid Park the night before Halloween.

Those two bookend games, the win-or-go-home wild card game that launched the Nationals' October and the Game 7 start Wednesday night that ended it, had one thing in common: They were both started by Max Scherzer.

Three nights earlier, the Nationals' veteran ace could barely get himself out of bed and couldn't raise his pitching arm, because of a severe bout of neck spasms that would force the team to scratch him from his Game 5 start at Nationals Park on Sunday night. Getting him ready to pitch Wednesday night required a cortisone shot, ample rest and perhaps divine intervention.

Getting him past the Astros' lineup, the best in baseball this season, would not be as easy.

Scherzer lived in near-constant danger throughout his five innings of work, allowing only a pair of runs but pitching with traffic on the basepaths throughout. One of the great strikeout pitchers of his era, he didn't record his first K in Game 7 until his 17th batter of the night. It was Scherzer's great fortune that the majority of the Astros' line drives and deep smashes landed in the gloves of his teammates.

That Manager Dave Martinez had failed to get a reliever warmed up as a clearly diminished Scherzer was allowing the Astros' second run to score in the fifth seemed to be either an egregious mistake or a staggering show of faith in his ace. By the time the fifth ended, the Astros led 2-0 but had already stranded nine baserunners.

In other words, after a month of exquisite play and narrow escapes, Game 7 had carried the Nationals to a familiar place. They had spent so much of the past five months playing from behind - from the long slog of digging out of May's 19-31 hole to the win-or-go-home games of early and mid-October - that it almost brought a perverse sense of comfort. They were at their best, they liked to say, when their backs were to the wall.

Wednesday night marked their fifth elimination game of the month, where a loss would end the season, following one in Milwaukee in the wild-card game, two against the Los Angeles Dodgers in the Division Series and Tuesday night's Game 6 win over the Astros. They had trailed in all of them, storming back each time to win. Their reputation as the sport's ultimate fighters was well-earned.

The seventh-inning homers by Rendon and Kendrick - the former a no-doubt blast into the stands in left, the latter a bending, twisting, opposite-field drive that clanged off the right field foul pole - were merely confirmation. Suddenly, the Nationals' 2-0 deficit was a 3-2 lead, and they were nine outs from winning the World Series.

By Wednesday night, the Nationals were running on a cocktail of fumes, painkillers, Red Bulls and dwindling supplies of adrenaline. Each player was reduced to his component parts and what each had left in it - how many pitches, how many innings, how many competitive at-bats.

After all the speculation about how the Nationals might piece together the necessary 27 outs for victory, it was as tidy an affair as they could have dreamed. Scherzer went five, giving way to lefty Patrick Corbin, their Game 4 starter, now pitching on short rest, who handled the next three without incident. And finally, Hudson entered for the ninth and set down the Astros.

Throughout this month, the Nationals left their fans a trove of memory-book moments: Soto's eighth-inning, three-run single off Milwaukee Brewers bullpen ace Josh Hader to lift the Nationals to victory in the NL wild-card game; the back-to-back homers from Rendon and Soto off Los Angeles Dodgers ace Clayton Kershaw in the eighth inning to tie Game 5 of the Division Series; and Howie Kendrick's grand slam two innings later off Joe Kelly to push the Nationals ahead.

The World Series alone featured two excellent starts from World Series MVP Stephen Strasburg, three homers from Soto and Scherzer's heroic effort just to get himself to the mound for Game 7.

The Astros may have been baseball's best team in the regular season - a 107-win juggernaut out of the top-heavy American League, with an offense that ranks among the best in history and a rotation headed by a trio of aces - but they were outplayed across seven games by the Nationals, humble wild card winners out of the National League.

To the very end, the Nationals played with a joy and camaraderie that is impossible to fake. They were an Internet meme come to life, with their dugout dance parties, "Baby Shark" singalongs, pink sunglasses, Soto Shuffles, Champagne-soaked renditions of Latin pop hit "Calma," and the ubiquitous catchphrase "Stay in the fight."

The fight lasted as long as it possibly could, through the final date on the baseball calendar. Washington had waited 95 years for another World Series champion. But the wait is over. The next time anyone sees this team, it will be at the championship parade down Constitution Avenue on Friday.