‘That play in our back pocket’: How Patrick Mahomes rallied the Chiefs to a Super Bowl win 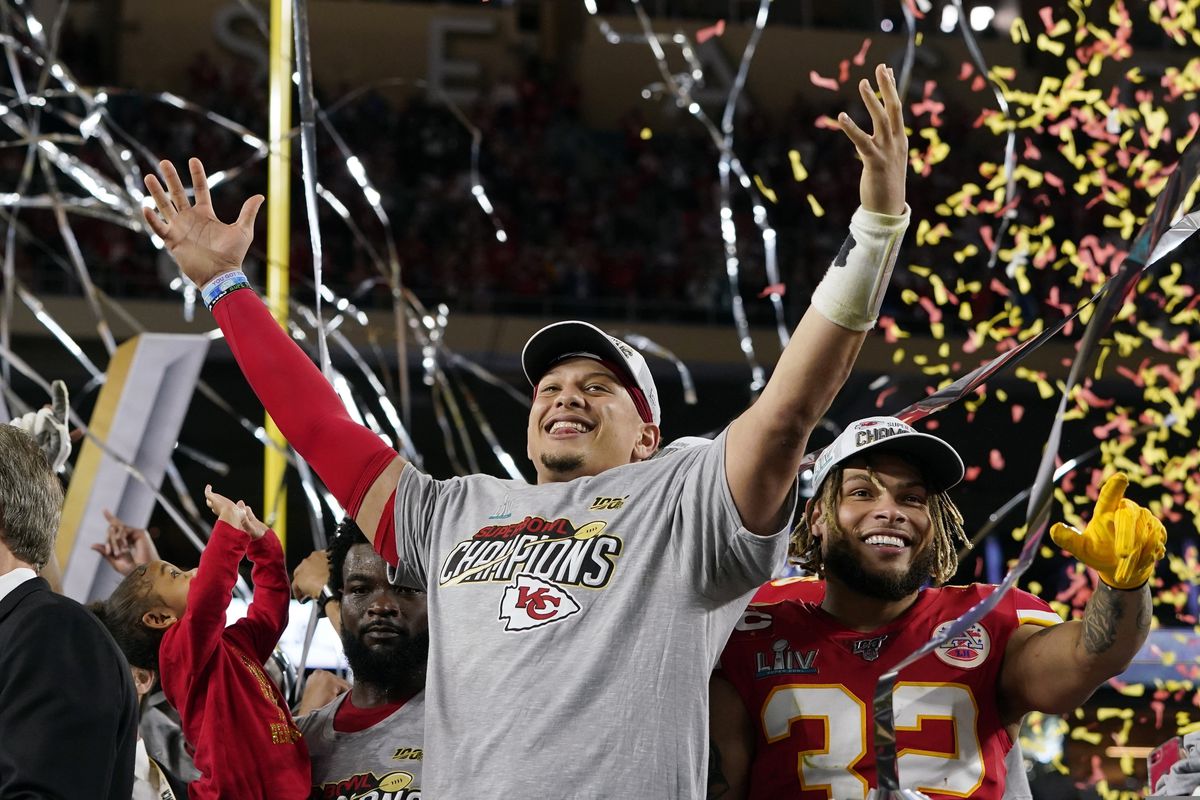 MIAMI GARDENS, Fla. - Patrick Mahomes stood at the center of the huddle, ready to tell the Kansas City Chiefs what they would do at their most desperate point. For three and a half quarters of Super Bowl LIV, the San Francisco 49ers had battered Mahomes and strangled his offense. The Chiefs trailed by 10. The Hard Rock Stadium clock showed 7:13. To maintain practical hope, they needed to convert on third and 15. It was a situation that strains what a football team thinks is possible. The Chiefs still believed they would win, because the quarterback they were staring at was Patrick Mahomes.

Mahomes heard offensive coordinator Eric Bieniemy's voice over the speaker in his helmet. It relayed the play he had been pleading with Coach Andy Reid to call for most of the second half, a play the Chiefs had set up early in the game and saved for the moment they most needed it - a moment like this. In a calm voice, Mahomes called, "Tre Right, Three Jet Chip Wasp."

And now, "Tre Right, Three Jet Chip Wasp" will live in Chiefs lore. It will reside forever next to "65 Toss Power Trap," the play Hank Stram leaned on to win Kansas City's first Super Bowl 50 years ago. The Chiefs won their second Sunday night, 31-20, after Mahomes played unevenly for 52 minutes and unleashed an unholy barrage in the final half of a quarter. The comeback hinged on that play, Mahomes's 44-yard heave to wide receiver Tyreek Hill, a combination of tactical brilliance and the kind of throw both little boys and fellow NFL quarterbacks can only dream of making.

Before the play, the Chiefs were dead. Afterward, they scored a touchdown, forced a 49ers three-and-out and scored again. Mahomes delivered Reid his elusive Super Bowl title, earned MVP honors and stamped himself, at only 24, as one of the greats. It all happened in a rush, in two series that changed the Super Bowl, redefined legacies and placed Mahomes atop the sport.

"He's definitely up there," Chiefs backup quarterback Chad Henne said. "I would put his name up there with some of the greats. Joe Montana was like my idol growing up. Guys like that I admire. Obviously Tom [Brady]. You can definitely mention Patrick's name."

The 49ers' ferocious pass rush, combined with a game plan reliant on Mahomes' running ability, bruised Mahomes all night. The Chiefs ran four option plays in the first half, and on one, a fourth-down conversion, 49ers defensive end Nick Bosa obliterated him after he pitched. On another scramble, safety Jimmie Ward clobbered him so hard with a shoulder to the chest that Mahomes fumbled out of bounds. The hits appeared to take a toll. Mahomes threw two interceptions, including one in the fourth quarter, when he misfired behind Hill on a crossing route.

The Chiefs took the field with 8:57 left and down, 20-10, on their 17. One second down, Mahomes ducked inside Bosa’s pass rush and saw open field. He darted nine yards, diving out of bounds over the first down marker. He had struggled all game, but for those know him, that run represented a pivot.

"When he makes one play, the fire lights," Bobby Stroupe, who has been Mahomes' personal trainer since fourth grade, said in a text message. "When it starts burning, you're done. I knew when he rushed for that first down, it was over."

After another first down, the drive started to bog down. A false start and a near completion, ruled incomplete after a replay challenge, set up third and 15 from the Kansas City 30. The review gave Kansas City coaches time to pick a perfect play. They relied on what had transpired earlier in the game.

All game, Mahomes said, the 49ers employed a "robber" coverage - one of the safeties in their trademark Cover 3 scheme would take away deep crossing routes in the middle of the field. In the first half, the Chiefs had run a deep shot for Hill, perhaps the most explosive receiver in football, down the center of the field. But the 49ers' "robber" had defended it well, while a linebacker covered tight end Travis Kelce.

The Chiefs' game plan contained a complement to that play. When the Chiefs reviewed pictures of the failed deep shot to Hill, they saw the 49ers' coverage would be vulnerable, because once the "robber" saw Hill headed toward the middle, it would leave the outside vacant. After halftime, Mahomes started telling coaches to run it. That complement was "Tre Right, Three Jet Chip Wasp."

"We knew we kind of had that play in our back pocket," quarterback coach Mike Kafka said. "We just didn't have a drive where we needed to get to it. But [Reid] was just going to unleash everything we had on the call sheet. Pat was the one that was talking to Coach about calling that play. He was the one who was emphasizing that play."

All game long, the Chiefs frequently lined up Kelce out wide by himself on one side and three wide receivers to the other side. In Reid's system, those wideouts are numbered, from outside to closest to the ball, 1, 2 and 3. Whenever the Chiefs positioned one of their fastest wide receivers - usually Hill, but sometimes Mecole Hardman - at the 3, the 49ers' safety cheated toward him.

Hill would be the 3, and "Wasps" called for him to run a "dangle" route. He would start off sprinting toward the middle of the field, to make it look like the failed deep shot from the first half, then break toward the corner.

The play included an adjustment to the formation. The "Chip" referred to tight end Blake Bell. He would line up next to the right tackle and block speedy pass rusher Dee Ford before he ran a pattern, a tactic needed to provide Mahomes enough time to throw such a deep route.

Usually, Hill would break his route and head to the corner at 18 or 20 yards. On the sideline, Henne watched Hill blaze past the mark, still in full sprint. In the secondary, safety Jimmie Ward sprinted to the middle, just as the Chiefs wanted and anticipated. In the pocket, Mahomes drifted back as defensive tackle DeForest Buckner closed in, knowing Hill would be open, trying to buy as much time as possible. As Hill reached 25 yards and Buckner charged, Henne thought, "Break! Break! Break!"

Finally, Hill made his cut to the corner, into an open swath of grass. Mahomes planted his right leg on his 21-yard line, 14 yards behind the line of scrimmage. As Buckner walloped his left shoulder, Mahomes slung the ball through the Florida night. The pass - off his back foot, thrown with a 6-foot-7, 300-pound man crunching him - floated 57 yards in the air. It landed softly in Hill's hands.

"That," Watkins said later, "is the golden child."

Four plays later, Mahomes hit Kelce in the back of the end zone from the 1, shrinking their deficit to 20-17 with 6:17 left. "Look," safety Daniel Sorenson told teammates on the sideline. "Get Pat the ball back, and he can do amazing things."

"I think everyone kind of knew," Kafka said later. "If we get this ball back, we're going to go down and score and win it."

First, they needed the ball back. The Niners had gashed Kansas City most of the night, and Coach Kyle Shanahan's running game had been the most devastating weapon of the postseason. The 49ers started the drive with a five-yard run. Quarterback Jimmy Garoppolo dropped back and, with Kansas City expecting a run, spotted George Kittle wide open over the middle.

On the first drive of the game, defensive tackle Chris Jones had smashed Garoppolo. From that point, he expected the 49ers to double-team him, which altered his approach. "They was not going to block one-on-one from the beginning, and I knew that," Jones said. "So I had to get my hands up, find another way to affect the quarterback. That's what I did."

Garoppolo fired a pass to Kittle, a certain first down, potentially a game-sealing play - until Jones swatted it down. The Chiefs stopped Garoppolo again on third down, and after using only 63 seconds, the 49ers punted back to Mahomes.

During the game, as the Chiefs' offense sputtered, inactive veteran running back LeSean McCoy turned to backup quarterback Matt Moore. "Yo," he said, "we need to go to Sammy more."

After the Chiefs crossed midfield, to the San Francisco 48, Reid called a play that originated from the offensive system Shanahan's father, Mike, created. It was a throwback pass designed for Watkins, who find a hole in the zone between a shallow corner and deep corner. Watkins snuck behind cornerback Richard Sherman, and Mahomes hit him for a 38-yard gain.

"This is one of the biggest moments of my life," Watkins said.

On first down, Mahomes escaped the pocket and scrambled for six yards. He tried another run on second down, but safety Jaquisky Tartt downed him a yard behind the line of scrimmage. On third and goal from the 5, running back Damien Williams snuck out to the right flat. Mahomes hit him in stride, and Williams glided over the pylon.

In a six-minute onslaught, the Chiefs had taken a 24-20 lead. Before those decisive drives, Mahomes had completed 18 of 31 passes for 172 yards with no touchdown passes and two interceptions. He was being outplayed by Garoppolo, and Reid's best chance to win a Super Bowl was slipping away.

But the Chiefs have long loved Mahomes not only for his talent, but also for his resilience. Before the Chiefs traded up to draft him 10th overall in 2017, General Manager Brett Veach watched Mahomes play in person a handful of games when Mahomes played for Texas Tech. "I saw him play Iowa State," Veach said. "He left in the second quarter with a shoulder injury. He came back in the game - it was 45-7, it was meaningless - because he wanted to play. He's so competitive."

If Mahomes was built like most athletes, he probably wouldn't have been on the field - in Week 7, he dislocated his kneecap on a quarterback sneak. One week later, inside the Chiefs' practice facility, he was competing in drills against Henne, who was also rehabbing. "Dude, you just dislocated your kneecap, and a week later you're out here throwing with me," Henne told him. He returned two weeks later.

Earlier this month, Mahomes had led playoff victories after facing deficits of 24-0 and 17-7. While taking a beating Sunday night, he never showed any effects.

"He's a tough kid," Kafka said. "He wouldn't let you know if he was feeling anything."

"He's going to be sore," Stroupe said. "He had to fight his ass off tonight."

In the Chiefs' locker room late Sunday night, jubilation numbed any pain. He sauntered toward his locker, a fresh championship T-shirt over his shoulder pads, and posed for pictures holding the Lombardi Trophy. He stripped down to his skivvies and wrapped a towel around his waist. He informed a reporter who had been a promising a one-on-one interview he needed to shower first. "Is that cool?" Mahomes asked. "Won't take long."

Mahomes walked across the room, black curls bobbing on his head. He stopped to high-five a teammate. "We won the Super Bowl," Mahomes told him as they hugged.

In the coming years, Mahomes may be saying that again and again. He is on an all-time track, if he has not already reached that status. He is the youngest quarterback in NFL history to win both an MVP and a Super Bowl. Late Sunday night, Henne pondered the preposterous-but-not-really-preposterous question of whether Mahomes, right now, is the best player the sport has seen.

For now, Mahomes walked around a corner and out of view. He had delivered the Chiefs, and he was ready to celebrate. There went Patrick Mahomes, the man who makes anything possible.'