Tokyo Games may need to be postponed, Olympic officials say, but no decision yet 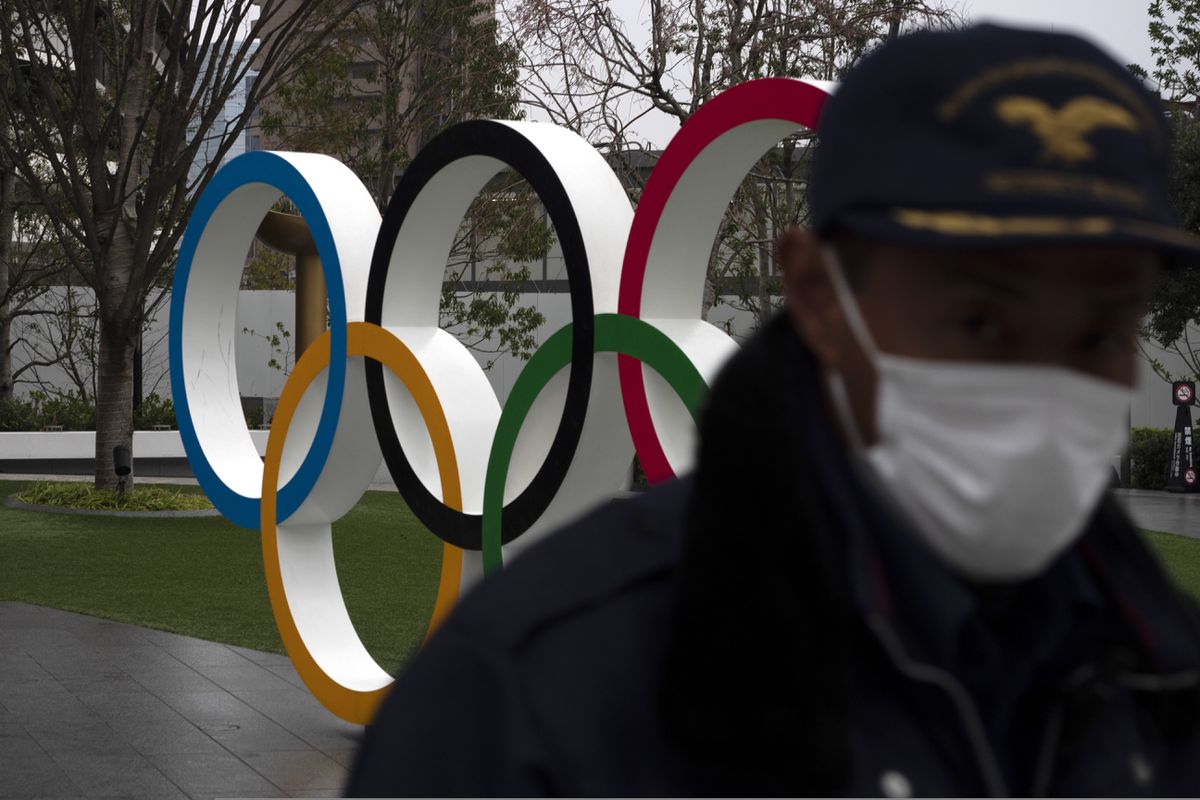 A security guard walks past the Olympic rings near the New National Stadium in Tokyo, Monday, March 23, 2020. The IOC will take up to four weeks to consider postponing the Tokyo Olympics amid mounting criticism of its handling of the coronavirus crisis that now includes a call for delay from the leader of track and field, the biggest sport at the games. (AP Photo/Jae C. Hong)

A security guard walks past the Olympic rings near the New National Stadium in Tokyo, Monday, March 23, 2020. The IOC will take up to four weeks to consider postponing the Tokyo Olympics amid mounting criticism of its handling of the coronavirus crisis that now includes a call for delay from the leader of track and field, the biggest sport at the games. (AP Photo/Jae C. Hong)

After weeks of insisting that the Tokyo Games would take place on schedule this summer, Olympic officials from one nation have pulled athletes from competition and others have revealed that they are considering a postponement, which could mark the first step in ultimately delaying the world’s largest sporting event because of the novel coronavirus.

Facing mounting pressure and growing criticism, Thomas Bach, the president of the International Olympic Committee, wrote a letter to Olympic athletes Sunday in which he said canceling the Summer Games altogether is not an option and vowed that a final decision on postponement would be made within the next four weeks.

"Together with all the stakeholders, we have started detailed discussions today to complete our assessment of the rapid development of the worldwide health situation and its impact on the Olympic Games, including a scenario of postponement," Bach wrote.

Japanese Prime Minister Shinzo Abe told a parliamentary committee Monday morning that postponing the Tokyo Games may become a consideration if the event cannot be staged in a "complete manner," marking the first time Abe has publicly entertained the idea of a delay.

"If that is difficult, we would have no choice but to decide to postpone with athletes in the first priority," Abe said, adding that canceling the Tokyo Games altogether is not an option.

Canada's Olympic officials on Sunday night announced that they would not send their athletes to compete in the Tokyo Games, requesting that colleagues around the world follow suit.

The public concessions come as the IOC has found itself increasingly under fire, facing heavy criticism from many athletes and sports federations. USA Swimming and USA Track & Field are among those who have publicly called for a one-year postponement in recent days, and athletes from around the world have voiced their concerns about competing in Tokyo this summer. Many have struggled to train and prepare for the Olympics while abiding by safety warnings from public health officials and government-backed restrictions.

Bach said in his letter that deciding the fate of the Tokyo Olympics now "would still be premature."

"This uncertainty rocks our nerves and raises or strengthens doubts about a positive future; it destroys hope," he wrote. "Some even have to fear for their very existence. This uncertainty stems from the fact that, at this moment, nobody can really make fully reliable statements about the duration of this fight against the virus. This is true for sport, science, the media, politics, and all of society. Therefore also the IOC can unfortunately not answer all your questions."

Sebastian Coe, head of World Athletics, the international governing body for track and field, wrote a letter of his own to Bach on Sunday and said keeping with a July-August schedule is "neither feasible nor desirable," becoming the most prominent Olympic official to date to call for a postponement.

"No one wants to see the Olympic Games postponed but as I have said publicly, we cannot hold the event at all cost, certainly not at the cost of athlete safety, and a decision on the Olympic Games may become very obvious very quickly," Coe wrote in the letter. "I believe that time has come and we owe it to our athletes to give them respite where we can. And in this matter, I believe we can."

Sarah Hirshland, chief executive of the U.S. Olympic and Paralympic Committee, issued a joint statement Sunday with Han Xiao, chair of the organization's athletes advisory council, saying the IOC letter was "an important step in providing clarity, but our athlete community continues to face enormous ambiguity surrounding the 2020 Games in Tokyo."

The USOPC officials said they're "eager to continue to explore alternatives to ensure all athletes have a robust and fulfilling Olympic and Paralympic experience, regardless of when that can safely occur."

The U.S. Anti-Doping Agency also called for a postponement Sunday. Travis Tygart, USADA's chief executive, told The Washington Post: "We agree the Games should be postponed, unfortunately, up to a year in fairness to athletes whose lives have been upended and to ensure they don't potentially become the dirtiest Games ever due to the significant reduction of anti-doping efforts due to covid-19."

By acknowledging postponement as a possibility, the IOC has relaxed its tone while still holding on to hope that the Tokyo Games can go on as scheduled.

"It is our experience as athletes that you must always be ready to adapt to new situations," Bach wrote. "For this reason we have, as indicated before, been thinking in different scenarios and are adapting them almost day by day."

Bach did not outline possible scenarios. A one-year delay appears to be the most likely option, though organizers also could consider a postponement of a few months or perhaps up to two years.

As concerns over the rapid spread of the disease have grown, pressure has mounted on Olympic officials to make a difficult decision on an event that poses a massive problem for organizers and athletes alike. As they publicly encouraged athletes to continue training for this summer, Olympic officials privately discussed holding the Summer Games without spectators or rescheduling for a later date.

The Olympics, scheduled to begin July 24, draw together more than 11,000 athletes and 25,000 journalists from more than 200 countries - plus hundreds of thousands of foreign tourists.

The coronavirus has disrupted athletic schedules and canceled qualifying events all over the globe. As gyms and facilities closed - including two U.S. Olympic training centers - many athletes struggled to find a place to train. Still, at an IOC executive board meeting March 3, a spokesman said the organization had not discussed contingency plans and vowed that the Games would begin on time.

Postponing an Olympics it would involve numerous stakeholders, sponsors, countries, sports federations and national organizing committees. Experts say any delay probably will pose logistical problems in terms of the global sporting calendar and would upend the schedules for athletes, who have been targeting the summer of 2020 and built their lives and training routines around peaking competitively this year.

In his letter to athletes, Bach called postponement an "extremely complex challenge."

"A number of critical venues needed for the Games could potentially not be available anymore," Bach said. "The situations with millions of nights already booked in hotels is extremely difficult to handle, and the international sports calendar for at least 33 Olympic sports would have to be adapted. These are just a few of many, many more challenges."

The IOC has said it will rely on counsel from the World Health Organization and prioritize health and safety, but there's also big money at stake, and postponement could require heavy changes over major contracts.

The IOC, a nonprofit organization, brought in more than $5 billion during the most recent four-year Olympic cycle, nearly three-quarters of which came from broadcast rights. NBC, the rights-holder in the United States, contributes about half of that and thus carries a lot of sway with the IOC.

“These are extraordinary and unprecedented times, and we fully support the IOC’s decision to step up its scenario-planning for the Tokyo Olympics,” an NBC spokesman said in a statement Sunday. “We are prepared to stand behind any decision made by the IOC, the Japanese government, and the world health officials with whom they are working regarding the Tokyo Olympics.”