Return to play or not? A thorny question for youth sports 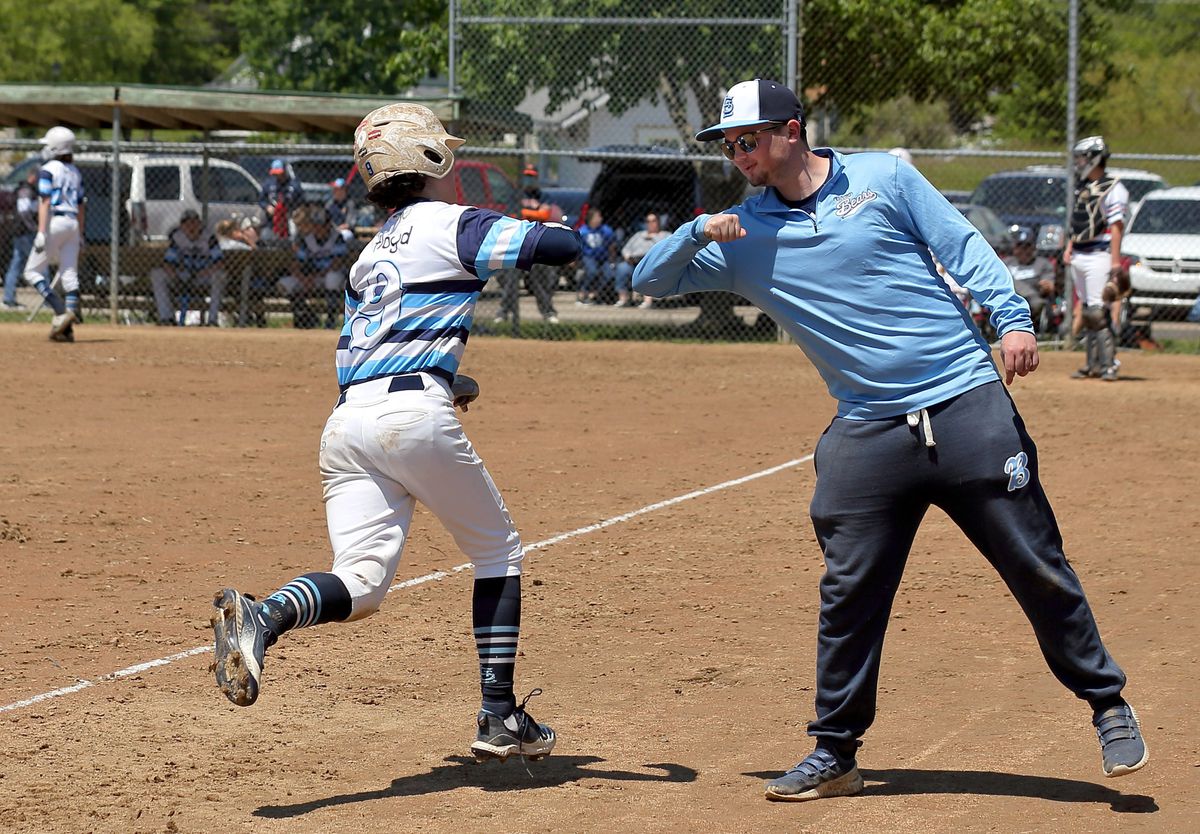 In this Saturday, May 9, 2020 photo, St. Louis Bears youth baseball players Mac Floyd, left, 14, gets a elbow bump from this brother and assistant coach Robby Floyd as Mac rounds the bases after smacking a homer during the Mother's Day Classic baseball tournament organized by GameTime Tournaments in Cottleville, Mo. (David Carson/St. Louis Post-Dispatch via AP)

In this Saturday, May 9, 2020 photo, St. Louis Bears youth baseball players Mac Floyd, left, 14, gets a elbow bump from this brother and assistant coach Robby Floyd as Mac rounds the bases after smacking a homer during the Mother's Day Classic baseball tournament organized by GameTime Tournaments in Cottleville, Mo. (David Carson/St. Louis Post-Dispatch via AP)

Konrad Ott and some of the parents with his Northern California girls volleyball club skipped a popular Florida tournament that is now postponed. They could soon face a similar decision about a national event in Dallas.

A boys baseball tournament organizer in the St. Louis area generated debate by staging an event less than a week after the Missouri governor cleared such gatherings.

These scenarios playing out across the nation illustrate how a return to youth sports amid the coronavirus pandemic is fraught with questions, from the health of everyone who attends to the ethics of potentially putting children in harm's way in the name of getting back to business.

“Obviously, there’s two sides to this story,” said Rob Worstenholm, whose youth baseball tournament in suburban St. Louis with social-distancing alterations for 50 teams or so was among the first sports activities of any kind since the shutdown in March. “I mean, 50% of the people hate me. But the other 50%, I could have run for president.”

The Amateur Athletic Union was planning to proceed with a volleyball event it has touted as the world's largest, scheduled for June in Orlando, Florida. An event that drew nearly 3,000 teams last year had about 500 entrants when it was postponed Friday and moved to mid-July.

Ott's Absolute Volleyball Club included six of the hundreds of teams that withdrew even as the AAU spent two weeks saying the event would be held with temperature checks, no handshakes and plenty of space between courts at the sprawling Orange County Convention Center.

While some clubs said organizers didn't make it clear what would happen if a player, coach or parent tested positive for the coronavirus, Ott's issue was the plan to allow each team's group to be twice as large as he thought it needed to be.

Politics are at play as well, with California Gov. Gavin Newsom, a Democrat, taking a more cautious approach than Gov. Ron DeSantis, his Republican counterpart in Florida.

“I know my families are very wary about traveling to states that have, they’re trying to rush to open,” Ott said. “My families were just really apprehensive, as was I, about getting on an airplane and flying across country, the hotels, the food. It just seems like a lot to get done in a pretty short amount of time.”

Before the postponement, Tony Carrow of the Nebraska Elite club said his parents were comfortable with what they thought was a low infection rate in the Orlando area. In one of the club's age groups, opinions were split on two teams, so they were combined into one.

“We had a very strong voice from certain parents that they wanted their kids to go,” Carrow said. “They want to get back to living their life.”

Since physical risk is inherent in most youth sports, the question of playing your children in a pandemic turns to the perception of risk, according to Scott Kretchmar, professor emeritus of exercise and sports science at the Penn State College of Health and Human Development.

With the AAU's postponement, the next major event for volleyball clubs around the country is a USA Volleyball tournament in Dallas in late June. The event is on for now, although Ott said he's already leaning against traveling with any of his club's teams. For many clubs, the AAU and USA Volleyball events wrap up the season.

“I would say that those are high-risk events,” said Dr. Richard Pan, a pediatrician and state senator in California. “You're drawing people from so many different parts of the country. And some of these areas may have a higher rate of this disease and others. But now we’re going to take all those people, bring them to one place, have them mixed together.”

Worstenholm's baseball tournament last weekend ended up with about a quarter of the teams he usually attracts. He anticipates keeping for now social distancing measures that include separating players and parents, putting the home plate umpire behind the pitcher's mound and spraying baseballs with disinfectant. And “unless something blows up,” he is planning events with higher numbers of teams most weekends through the summer.

“I love to see kids play,” Worstenholm said. “But I've never seen anything like this. It was like a joy times a hundred. It wasn't just kids being happy because they're playing baseball. It was way beyond that.”

The adults have to weigh when, and where, that return to play can happen.