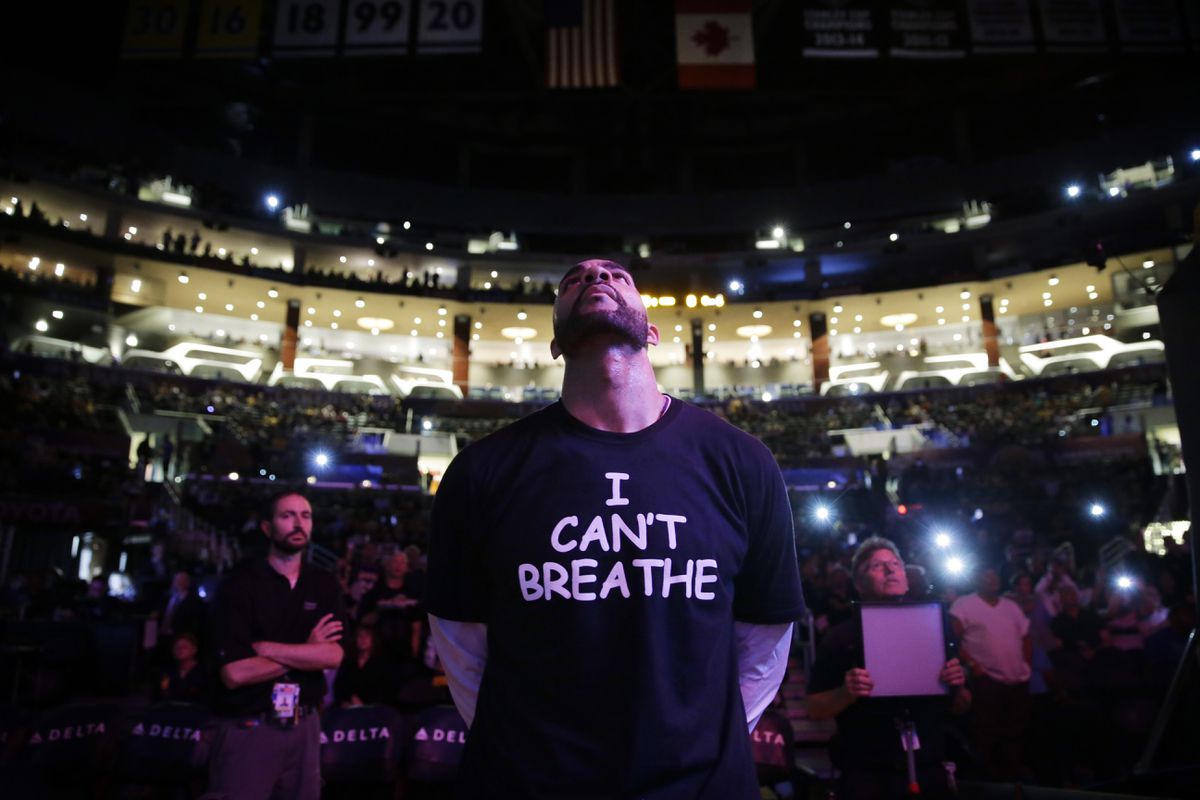 FILE - In this Dec. 9, 2014, file photo, Los Angeles Lakers' Carlos Boozer, wearing a T-shirt reading ""I Can't Breathe" stands before team introductions for an NBA basketball game against the Sacramento Kings in Los Angeles. Eric Garner uttered those words six years ago, locked in a police chokehold. It became a rallying cry after his death for demonstrators across the country who protested the killings of African Americans by police. Until this week. George Floyd uttered the exact same words, while handcuffed and pinned at the neck under the knee of a white police officer, galvanizing the movement anew and prompting mass protests around the country. (AP Photo/Jae C. Hong, File)

FILE - In this Dec. 9, 2014, file photo, Los Angeles Lakers' Carlos Boozer, wearing a T-shirt reading ""I Can't Breathe" stands before team introductions for an NBA basketball game against the Sacramento Kings in Los Angeles. Eric Garner uttered those words six years ago, locked in a police chokehold. It became a rallying cry after his death for demonstrators across the country who protested the killings of African Americans by police. Until this week. George Floyd uttered the exact same words, while handcuffed and pinned at the neck under the knee of a white police officer, galvanizing the movement anew and prompting mass protests around the country. (AP Photo/Jae C. Hong, File)

In the days since George Floyd’s death first garnered national attention, current and former NBA players have expressed anger, condemned police brutality and played important roles in the protests that have swept the country.

Floyd, an African American man, died May 25, after a white Minneapolis police officer named Derek Chauvin knelt on his neck as he cried out for help. The incident, which was captured on video, spread quickly on social media and recalled the 2014 death in New York of Eric Garner, as both men said “I can’t breathe” during their deadly encounters with police.

Garner’s death, which occurred after he was placed in a chokehold by a police officer, also prompted a vocal response from NBA players. Many stars, including LeBron James, Derrick Rose and Kobe Bryant, donned shirts that read “I can’t breathe” while warming up before games.

Stephen Jackson, a 14-year NBA veteran who retired in 2014, led a protest Friday in Minneapolis, where he was joined by Karl-Anthony Towns and Josh Okogie of the Timberwolves. Identifying himself as Floyd's longtime friend dating to their shared upbringings in Houston, the 42-year-old Jackson called Floyd his "twin" due to their shared physical resemblance.

"I'm here because they're not going to demean the character of George Floyd, my twin," Jackson told a large gathering in front of Minneapolis City Hall. "A lot of times when the police do things they know is wrong, the first thing they try to do is cover it up and bring up your background to make it seem like the bulls--- they did was worth it. When was murder ever worth it? But if it's a black man, it's approved. You can't tell me, when that man (Chauvin) had his knee on my brother's neck, taking his life away with his hand in his pocket, that that smirk on his face didn't say, 'I'm protected.' "

Chauvin was arrested Friday and charged with third-degree murder and second-degree manslaughter, but not until after multiple nights of heavy protests in Minneapolis. Protests continued Friday and Saturday nights in Minneapolis, Washington, New York, Los Angeles and a host of other cities across the country.

In Atlanta, Jaylen Brown of the Boston Celtics led a peaceful protest walk Saturday after downtown demonstrations on Friday. Brown, a Georgia native, coordinated meetups with fellow protesters on social media and carried a sign that read "I can't breathe." The crowd chanted "No justice, no peace. No racist police."

"I'm a black man and a member of his community," Brown said on a live video streamed on his Instagram account. "I grew up on this soil. This is a peaceful protest. We're walking. That's it. We're raising awareness. Some of the injustice we've been seeing is not OK. As a young person, you've got to listen to our perspective. Our voices needed to be heard. I'm 23 years old. I don't know all the answers, but I feel how everybody else is feeling."

Media showing this???? I bet you they’re not. 🤦🏾‍♂️! You know why, cause this is unity, peaceful, beautiful and love! https://t.co/QkgH2SFmON

Indiana Pacers guard Malcolm Brogdon joined Brown and addressed the group with a bullhorn, acknowledging its collective frustration while encouraging the protesters to avoid looting.

"I have brothers, sisters and friends who are in the streets," he said. "Who are getting pulled over, discrimination, day after day. The same bulls---. This is systematic. We don't have to burn down our homes. We built this city. This is the most proudly black city in the world. Let's take some pride in that. Let's focus our energy. This is a moment. We have leverage right now. I have a grandfather who marched next to Dr. (Martin Luther) King in the '60s. He would be proud to see us all here."

With New York Knicks guard Dennis Smith Jr. and Philadelphia 76ers forward Tobias Harris participating in separate protests in Fayetteville, North Carolina, and Philadelphia, and other prominent voices in the NBA community took to the airwaves and social media.

Charlotte Hornets Chairman Michael Jordan released a statement Sunday in which he said he was "deeply saddened, truly pained and plain angry."

"I stand with those who are calling out the ingrained racism and violence toward people of color in our country," added Jordan, who won six titles as a player with the Chicago Bulls in the 1990s. "We have had enough. . . . We need to continue peaceful expressions against injustice and demand accountability. Our unified voice needs to put pressure on our leaders to change our laws, or else we need to use our vote to create systemic change."

Los Angeles Clippers Coach Doc Rivers recounted a 1997 case of arson at his Texas home that he believes was racially motivated.

"Being black in America is tough," the longtime coach and former player said in a statement. "I've personally been called more racial slurs than I can count, been pulled over many times because of the color of my skin, and even had my home burned down. The response we are seeing across the nation, to the murder of George Floyd, is decades in the making. . . . Silence and inactivity are not acceptable anymore. Now is the time to speak. November is the time to vote."

Phoenix Suns Coach Monty Williams, who spent nearly a decade playing in the NBA, said he was "angry, afraid and in pain" in an opinion article Sunday in The Athletic, adding that "the solutions start with love, listening, compassion, service and defending those who can't defend themselves."

Former player Jalen Rose, now an ESPN commentator, said Friday that he "wish(ed) America loved black people as much as they love black culture." Dwyane Wade, the former Miami Heat star turned TNT commentator, wrote on Twitter that "JUSTICE WILL NOT BE SERVED UNTIL THOSE UNAFFECTED ARE AS OUTRAGED AS THOSE WHO ARE."

James, the Los Angeles Lakers forward and the sport's biggest star, shared videos about the history of police brutality and mobilizing in response to Floyd's death.

"This isn't ok the way we're treated man! I'm so hurtful for my people right this moment," James wrote on Twitter.

Portland Trail Blazers forward Carmelo Anthony shared images from the protests, demanding "JUSTICE FOR GEORGE" and writing on Instagram: "I Don't See An American Dream, I See An American Nightmare. The Greatest Purveyor Of Violence In The World: My Own Government. I Can Not Be Silent."

These players were joined by official statements from numerous NBA teams, including the Blazers, who decried the "senseless acts of violence in the long continuum of racial injustice in our country," and the Raptors, who said "we cannot accept" racism and violence and that "we know grieving is not enough."

Detroit Pistons Coach Dwane Casey, meanwhile, recalled his childhood in Kentucky, where he attended a newly integrated school "where I was not wanted nor welcomed."

"I can remember exactly how I felt as an eight-year-old child," Casey, who coached in Minnesota from 2005 to 2007, wrote in a statement Saturday. "I felt helpless. I felt as if I was neither seen, nor heard, nor understood. I see how many people continue to feel those same feelings - helpless, frustrated, invisible, angry.

"Black, white and brown people have to work together to find new answers. The only way we can stop the systemic problems that people of color have faced all our lives is through honesty and transparency. We have to understand why people are at their limit at this moment. It takes empathy, in its truest form."

The outcry across professional basketball comes as the NBA remains shut down due to the novel coronavirus pandemic. NBA Commissioner Adam Silver and the Board of Governors are working through plans for a return, with games expected to resume at Disney World’s ESPN Wide Word of Sports complex in late July.