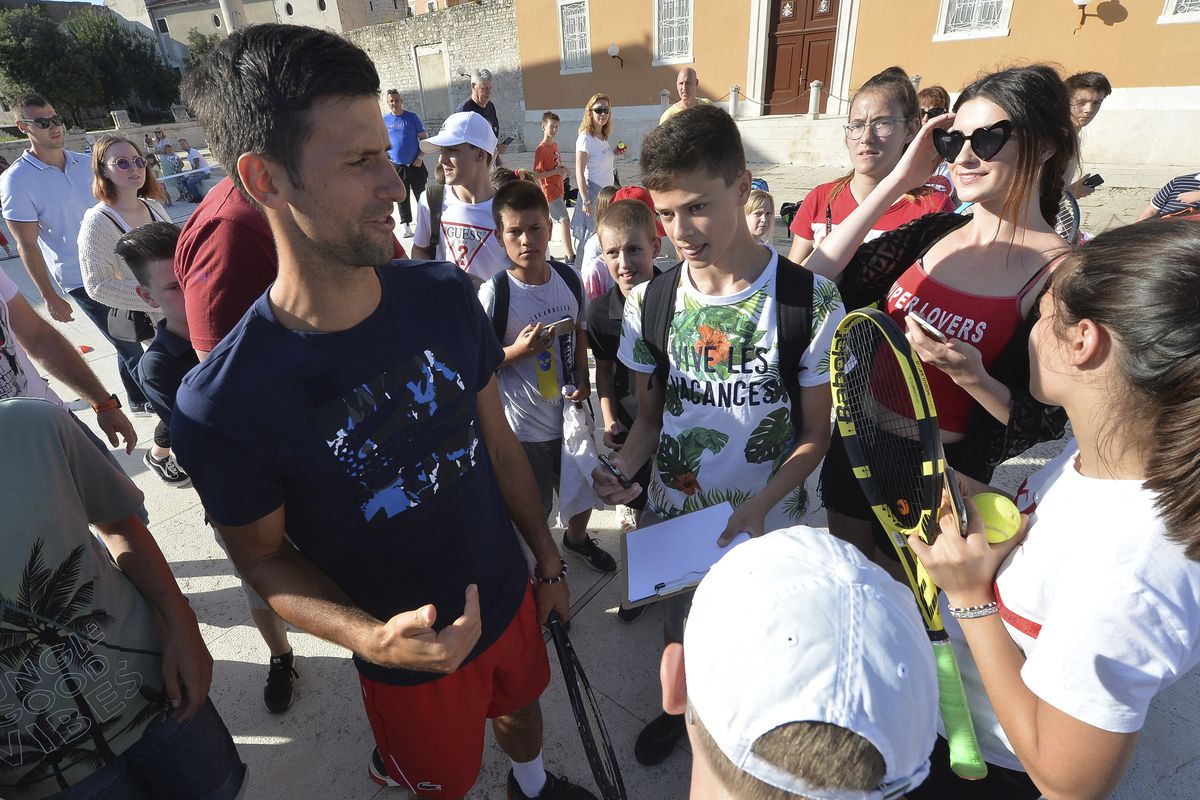 In this photo taken June 18, 2020, Serbian tennis player Novak Djokovic, left, talks to children in Zadar, Croatia. Novak Djokovic has tested positive for the coronavirus after taking part in a tennis exhibition series he organized in Serbia and Croatia. (AP Photo/Zvonko Kucelin)

In this photo taken June 18, 2020, Serbian tennis player Novak Djokovic, left, talks to children in Zadar, Croatia. Novak Djokovic has tested positive for the coronavirus after taking part in a tennis exhibition series he organized in Serbia and Croatia. (AP Photo/Zvonko Kucelin)

BELGRADE, Serbia — Tennis star Novak Djokovic, who tested positive for coronavirus, apologized online Wednesday for organizing a series of exhibition matches that brought together professional players from various countries to play in Serbia and Croatia.

Thousands of spectators attended the matches and no social distancing was observed. The tour has been canceled. The 17-time Grand Slam champion and his wife tested positive for the virus on Tuesday.

“We were wrong and it was too soon,” wrote Djokovic, who has previously said he was against taking a vaccine for the virus even if it became mandatory to travel.

Djokovic’s outspoken father blamed the cancellation of the tour on Grigor Dimitrov, one of the three other players to test positive in the last few days. There is no evidence to suggest Dimitrov spread the virus to others.

"Why did it happen? Because that man probably came sick, who knows from where," Srdjan Djokovic told RTL Croatia TV. "He didn't test here, he tested somewhere else ... I think that's not fair.

"He inflicted damage to both Croatia and to us as a family in Serbia," Srdjan Djokovic said. "Nobody is feeling well because of this situation."

Dimitrov, a three-time Grand Slam semifinalist from Bulgaria, was the first Adria Tour participant to test positive for the virus. He was followed by Borna Coric and Viktor Troicki.

The infections raised questions about the full-fledged return of competitive tennis, including the scheduled U.S. Open in August.

Dimitrov played in matches in both Belgrade and at the Croatian Adriatic resort of Zadar. He reportedly arrived in Serbia from the United States and his native Bulgaria. He did not immediately respond to The Associated Press' request for comment while recovering from the infection in Monaco.

NBA player Nikola Jokic, a Serb who plays for the Denver Nuggets, has also tested positive for the coronavirus. He was pictured shaking hands with Djokovic at an exhibition basketball event in Belgrade this month.

Jokic is reportedly recovering in his hometown of Sombor.

Djokovic’s mother said her son and his wife Jelena are feeling fine, but are suffering because of the widespread criticism.

"It is horrible what is being written, but we are used to it," Dijana Djokovic told the Belgrade Blic daily newspaper.

The coronavirus outbreak led to the suspension of the ATP and WTA professional tennis tours in March. Plans were announced last week for the sport's sanctioned events to return in August.

The U.S. Open is scheduled to begin Aug. 31 without spectators.