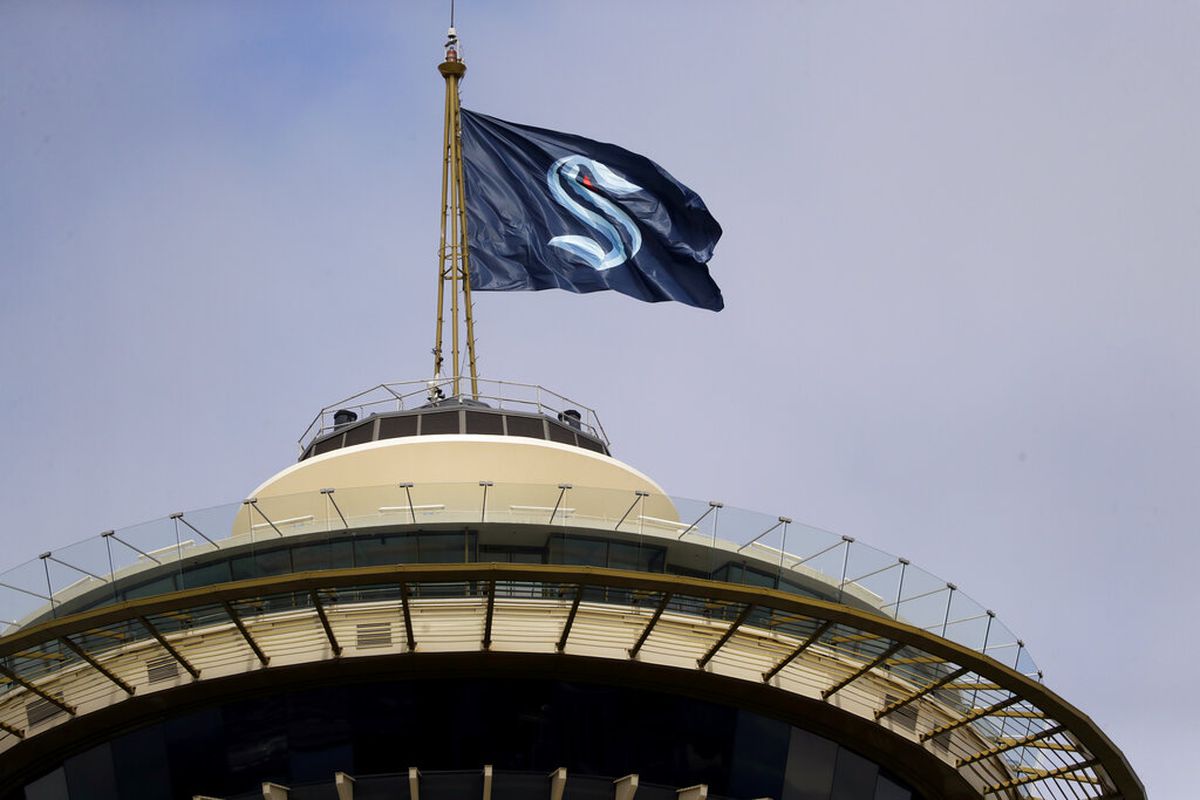 A flag with the new logo for the newly-named Seattle NHL team, the Seattle Kraken, flies atop the iconic Space Needle Thursday, July 23, 2020, in Seattle. The hockey expansion franchise unveiled its nickname Thursday, ending 19 months of speculation about whether the team might lean traditional or go eccentric with the name for the league's 32nd team. Seattle's colors are a deep dark blue with a lighter shade of blue as a complement. (AP Photo/Elaine Thompson)

A flag with the new logo for the newly-named Seattle NHL team, the Seattle Kraken, flies atop the iconic Space Needle Thursday, July 23, 2020, in Seattle. The hockey expansion franchise unveiled its nickname Thursday, ending 19 months of speculation about whether the team might lean traditional or go eccentric with the name for the league's 32nd team. Seattle's colors are a deep dark blue with a lighter shade of blue as a complement. (AP Photo/Elaine Thompson)

SEATTLE -- Seattle’s incoming NHL franchise has picked “Kraken” as its team name, eschewing tradition and going with a moniker that generated some of the most heated debates among local fans.

The fearsome, mythical sea creature — akin to a monstrous squid — was mentioned in an Alfred Lord Tennyson sonnet from 1830 and later popularized in the 1953 novel “The Kraken Wakes” by John Wyndham. It subsequently landed in some Hollywood movies, including the “Pirates of the Caribbean” franchise produced by current NHL Seattle owner Jerry Bruckheimer.

The team, which opens play at Climate Pledge Arena in October 2021, becomes the first Seattle major men’s professional franchise with a name not ending in “s” — following in the footsteps of the women’s pro WNBA Storm and NWSL Reign.

“The Kraken is a name born of the fans,‘' NHL Seattle CEO Tod Leiweke said in announcing the widely anticipated decision at a Thursday morning news conference at the site of what was formerly KeyArena. “It was suggested and championed by the fans.‘'

The team has launched an online store selling “Release The Kraken!‘' merchandise, with all net proceeds through Aug. 21 going to local nonprofits YouthCare, the Urban League of Metropolitan Seattle and Community Passageways. The catchphrase was popularized by actor Liam Neeson in a 2010 remake of the “Clash of the Titans” movie.

In an interview after the announcement, Leiweke said: “We considered everything. And many of the names had plusses and many had minuses. But at the end of the day, like an endearing friend, this name just kept hanging in there.”

Leiweke said the team closely monitored fan polls — especially one in The Seattle Times two years ago that garnered more than 146,000 votes — and understood Sockeyes, Totems and other names had staying power as well. But Kraken kept finding its way into the discussion, especially in team-commissioned focus groups.

The team also unveiled its new logo and team colors, which involve four shades of blue — described as Deep Sea Blue, Ice Blue, Boundless Blue and Shadow Blue on the Kraken website — as well as a splash of red it calls “Red Alert.” The colors and “S”-shaped logo — an ode to Seattle and the Kraken’s eye and tentacles — were created by Adidas and inspired by uniforms worn by the Seattle Metropolitans of the Pacific Coast Hockey Association from 1915 to 1924.

The naming announcement, as expected, lit up social media. The term “Krak Heads” immediately began trending on Twitter in reference to fans of the team, who expressed both anger and support for that designation.

Outside the under-renovation arena — dubbed the “Krak House” in myriad social media posts — Lower Queen Anne resident Mark Siano, 44, had shown up on Rollerblades along with hockey gloves and a stick when the name was announced. The lifelong local hockey fan, who began playing locally at age 4, was both stunned and thrilled.

“I like the Kraken name,” Siano said. “I won’t lie, it wasn’t my first choice. But it was far and away the choice of the fans.”

Siano said he prefers traditional sports names and initially wanted “Pilots” or “Metropolitans” for the NHL team. But Kraken “kind of grew on me” and he loves the color scheme as well.

Leiweke said, “This name will have staying power if we do other things right. This isn’t the brand. The brand is going to be built and this is part of it.”

The team had to work out trademark agreements on the name with several commercial entities, including Kraken Rum — which has agreed to become the official rum sponsor of the new team. The official NHL Seattle Twitter account changed to a Seattle Kraken name on Thursday with a bio that reads: “Now that we have a name, we’re strategizing all the ways to draft your favorite player.”

Origins of the Kraken myth date back hundreds of years.

Writer Erik Pontoppidan described in his 1755 book “The Natural History of Norway” how fishermen had seen a creature that was “round, flat, and full of arms, or branches” and is “the largest and most surprising of all the animal creation” spanning the size of several small islands.

“I think the mythology of the Kraken is going to be really interesting,‘' NHL Seattle minority owner Mitch Garber, a member of the team executive committee led by managing partner David Bonderman that selected the name, said in an interview Thursday. “Especially in an arena that’s being dug more than 50 feet below the ground. I think it will be really, really interesting for the fans.‘'

Garber said the team went through “a lot of iterations” with Adidas before settling on the color scheme.

Garber said the team “did go through many colors that were totally foreign to Seattle sports” before landing on these. He added the colors should go well with the “environmental aspect” of the newly named arena, though he admitted the team had no idea what the venue’s name would be when the final decision on the logo and uniforms was made.

Garber said the team went through a “really long process” of eliminating some names and investigating trademark conflicts before arriving at a decision he feels will represent the “maritime history'' of the region.

“In most of the voting, the fans told the team that Kraken was a name they really wanted to see,‘' Garber added. “I’m sure there’s going to be lots of Twitter disputes — and maybe more than Twitter disputes — but we’re really proud of the name and the way we came up with it through the process of elimination.‘'

Adidas Hockey design director Matty Merrill said the company worked with NHL Seattle executives for roughly a year, whittling down a list of names from 1,200 to about three dozen. Merrill said The Times poll in October 2018 helped bring things into sharper focus.

“It became very clear that Kraken wasn’t going away,” he said.

Then, bolstered by further team polling and focus groups, they “really firmed up” on Kraken and a handful of other names and began design work last fall.

The challenge was avoiding cartoonish logo gimmickry that critics of the Kraken name — including initial skeptics from the team’s ownership ranks — feared might lead to ridicule. Bruckheimer suggested Merrill “explore the dark spaces of the mind” with the logo, taking a less-is-more approach that assumes people fear the monster more because of what they can’t see than what they can.

“No matter what the name was, the logo had to have prestige,” Merrill said. “It had to have a certain status … so, no cartoons for sure.”

A native of Enumclaw, whose grandfather, John, was a backup coxswain for “The Boys in the Boat” 1936 Olympic gold medalist rowing team from the University of Washington, Merrill admitted it’s been tough keeping the name a secret from family and friends for months.

Though NHL Seattle knew by January it wanted to go with Kraken, it added four other finalists to the equation and kept them around just in case.

“In the trademark world, you never land on one name,” Leiweke said. “You measure twice and cut once. So, we had many names that percolated along but ‘Kraken’ was always at the forefront.”

Once the trademark issues were smoothed over, Leiweke planned to delay releasing the name until this fall out of sensitivity to the pandemic and public protests against police use of force. But Leiweke said the team, fearing a leak of the name and sensing the city could “use some good news,” decided to move things up.

With the name and colors announced, the team will turn to other pressing issues.

On the business front, Leiweke plans to spend next week revisiting the delayed sales of general season tickets, something postponed when the COVID-19 pandemic struck.

On the hockey operations side, the Kraken and general manager Ron Francis must name their first head coach, round out the scouting staff and hire a strength coach and trainer. Leiweke said that’s not expected before the end of the upcoming Stanley Cup playoffs starting next week.

But, Leiweke added, the team will at least have members attending those playoffs as the Seattle Kraken and not some unnamed entity.

“This is what the fans want,” Leiweke said of the name. “Not all of them, but many of them. They’ve been vocal and they’ve made a heck of a case.”