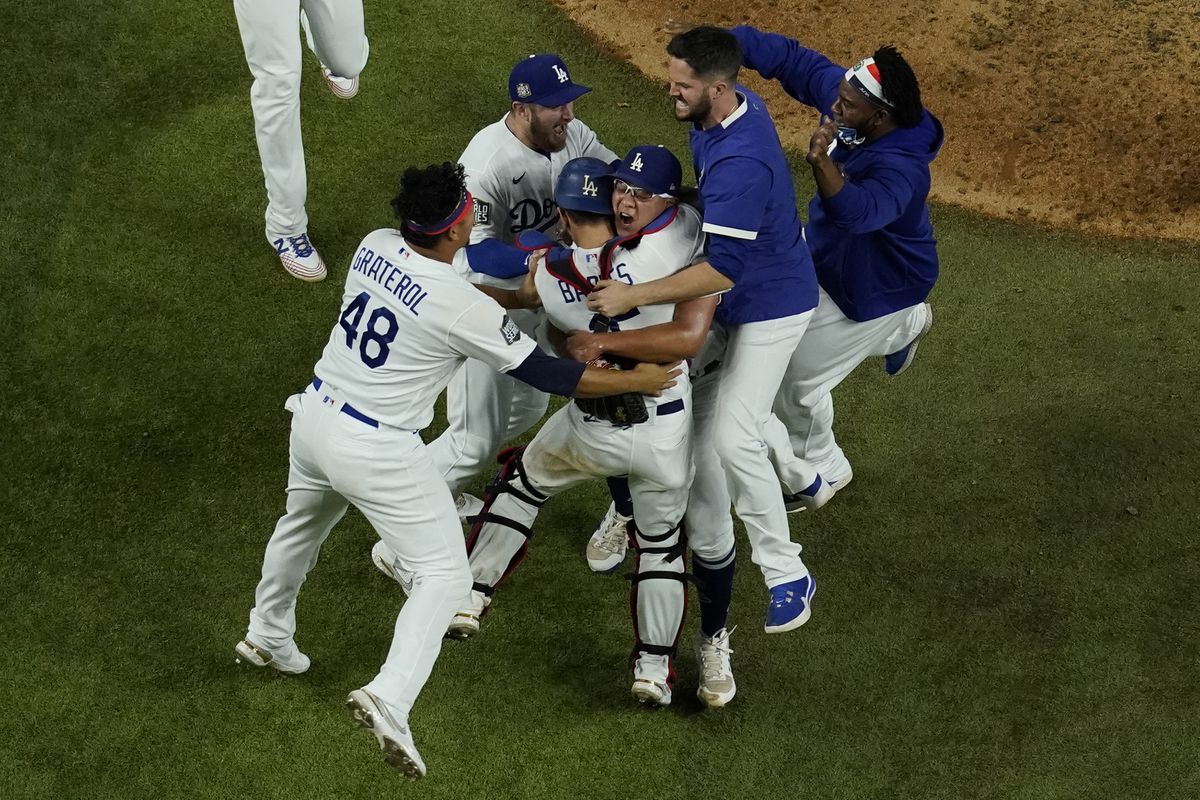 ARLINGTON, Texas — All year long, from February, when the coronavirus pandemic was a concept beyond our imaginations and a shutdown was inconceivable, until Tuesday night, the Los Angeles Dodgers believed this was the year. This was the year those hovering ghosts — produced by annual heartbreak the last seven years — would vanish. This was the year they would add another round of World Series highlights to the 1988 reel that grows grainier each passing autumn. This was the year and this was the team to finally end a championship drought going on 32 years.

It happened Tuesday night inside Globe Life Field, a cavernous shiny new building 1,400 miles away from their home, in front of 11,437 people. It happened when Julio Urias struck Willy Adames out looking to end Game 6 of the World Series and spark a celebration millions of children, teenage and adult Dodger fans — now mothers and fathers and aunts and uncles — have never experienced.

It happened. It finally happened. The Dodgers beat the Tampa Bay Rays, 3-1, to win the series, four-games-to-two, and claim their first World Series since 1988, the franchise’s seventh title, and sixth since moving to Los Angeles.

It didn’t happen according to the script. Tony Gonsolin, the rookie right-hander tasked to start the biggest game of his life, allowed one run in just 1 2/3 innings. But six relievers logged 7 1/3 scoreless innings to finish the job while the offense produced just enough after Rays manager Kevin Cash chose to pull Blake Snell in the sixth inning despite his dominance.

The decision blew up in Cash’s face. The Dodgers immediately scored two runs to take the lead and added a third on Mookie Betts' home run in the eighth inning.

The hike to the summit began way back in February when Betts and David Price, acquired from the Boston Red Sox in a heist, were presented in a news conference at Dodger Stadium. The next day pitchers and catchers reported for spring training.

The initial conversation centered on the Houston Astros' cheating scandal, not on adding one of the best players in baseball to a loaded roster. Players called the Astros' apologies weak. They criticized commissioner Rob Manfred for granting players immunity. They insisted the championship Houston won against them in 2017 was tarnished. Speaking out so forcefully, they hoped, would remind everyone that Houston’s transgressions weren’t normal.

A week later, after the subject died down, Betts addressed his new team with a five-minute clubhouse speech the morning of their second day of full-squad workouts.

Betts was a newcomer but a World Series champion whose relentless work ethic was already admired. He stressed urgency. He emphasized sweating the small details. His message resonated and accountability became a theme. A kangaroo court fine system was created for mistakes during workouts and Cactus League games.

Then, on March 12, MLB shut down operations. For nearly four months, the Dodgers worried that the best roster they’d assembled in recent memory wouldn’t have the chance to win a championship. Betts, an impending free agent, wondered if he would even play a meaningful game as a Dodger.

Negotiations between the players union and league to stage a season eventually got ugly and spilled into the public. Everyone wanted to play a season. Too much money was on the line to cancel. But Dodgers' motivation went further. They knew they were World Series favorites and showed it once they reconvened for the 60-game regular season in July.

Price, penned as the team’s No. 3 starter, opted out before summer camp, but the Dodgers stampeded through the clubs west of the Mississippi on their schedule anyway.

They finished with the highest win percentage by any team since 1954 to win their eighth consecutive division title. They scored the most runs in the majors. They compiled the best ERA. Several Dodgers, including World Series winners, said this was the best team they had ever played on. They were ready to finally conquer October for the first time since 1988.

“It’s interesting,” Roberts said. “We’ve heard it a lot and we’ve seen a lot of highlights and it’s fantastic, but I think we want to make our own mark on Dodgers' history.”

Los Angeles swept the Milwaukee Brewers and San Diego Padres in the expanded postseason’s first two rounds. Both clubs were shorthanded, but the Dodgers did what was expected. The Atlanta Braves were another class of opponent. The Dodgers fell behind three-games-to-one, pushing their season to the brink, before winning three games in three days to punch a ticket to the World Series for the third time in four years.

The stage was set for them to finally win it Tuesday.

Keith Williams Jr., beloved in Los Angeles for his soulful renditions of the national anthem, sang a pre-recorded version at Dodger Stadium for Game 6.

The pro-Dodgers crowd’s hearty approval reverberated around the sealed ballpark – the roof was left closed with rain and temperatures dipping into the upper 30s in the forecast.

Gonsolin, a rookie, threw the night’s first pitch after Vin Scully informed the masses it was “time for Dodger baseball” on the big screen. Gonsolin was deployed as a conventional starter, not as an opener as he was in Game 2. The Dodgers hoped he could pitch through the Rays' lineup twice before flipping it with a left-handed reliever. Those hopes were quickly dashed.

Gonsolin began his outing by striking out Ji-man Choi on three pitches. Two pitches later, Randy Arozarena, the scalding hot slugger fueling the Rays' offense, flicked a slider off the plate outside the other way for a solo home run. It was Arozarena’s 10th home run of the playoffs – two more than any other player has ever clubbed in a single postseason.

Gonsolin survived a 25-pitch first inning before encountering more roadblocks in the second. The right-hander surrendered a one-out single to Kevin Kiermaier. Two batters later, he issued a two-out walk to Choi to bring up Arozarena with two out and two on.

Roberts had seen enough. He replaced Gonsolin with Dylan Floro with a specific thought in mind: Arozarena’s weakness is the changeup and Floro throws a good one. The right-hander stuck to the blueprint. He struck Arozarena out with three changeups and escaped.

Snell wasn’t dealing with any kind of trouble. The Dodgers didn’t have an answer for the 2018 American League Cy Young award winner. The left-hander allowed one baserunner – Chris Taylor singled – through five innings. He compiled nine strikeouts without a walk on 69 pitches. He was utterly dominant. Then he gave up a single to Austin Barnes, the Dodgers' No. 9 hitter, and Cash emerged from the third-base dugout.

Snell knew what was coming. The Rays reached the World Series by firmly sticking to the numbers to maximize matchups and optimize run prevention. And the numbers say getting through a lineup a third time is difficult for a pitcher. So Cash emerged to pull Snell despite the fact that he was overpowering a loaded lineup.

Cash removed Snell early in Game 6 of the American League Series against the Houston Astros. That backfired and the Rays lost.

On Tuesday, Cash made his decision with the top of the Dodgers' lineup due up. Betts, Corey Seager and Justin Turner are a dangerous trio, but they were 0 for 6 with six strikeouts against Snell. Danger didn’t appear imminent.

Cash didn’t care and Snell was angry. He shouted expletives when he saw his manager walking his way. He gave Cash the ball and left the field heated. The Dodgers were handed a gift and they cashed in.

Nick Anderson, a tall right-hander, replaced Snell even though Betts batted just .200 against left-handers during the regular season and had the unusual struggles continue through the playoffs. Anderson got behind 2-0. Betts cracked the third pitch, a 95-mph fastball, down the left-field line for a double, advancing Barnes to third base.

Barnes then scored on a wild pitch. Betts followed him when Seager hit a groundball to the first baseman. The Rays' infield was drawn in, but Betts, as he did in Game 1, dashed home on contact and beat the throw with a headfirst slide. He even duplicated the celebration: a crouched fist pump.

The Dodgers, dormant minutes earlier, were alive and well, energized by Cash’s decision to pull his best pitcher. Betts gave them a little more breathing room when he blasted a leadoff home run off Nick Fairbanks in the eighth inning. Betts screamed toward the roof as he rounded first base and teammates spilled out of the Dodgers' dugout. The Dodgers felt it coming.

Urias, once a teenage phenom, took it from there. He jogged to the mound in the ninth inning to resounding cheers to finish the job, one Los Angeles waited on for 32 years.