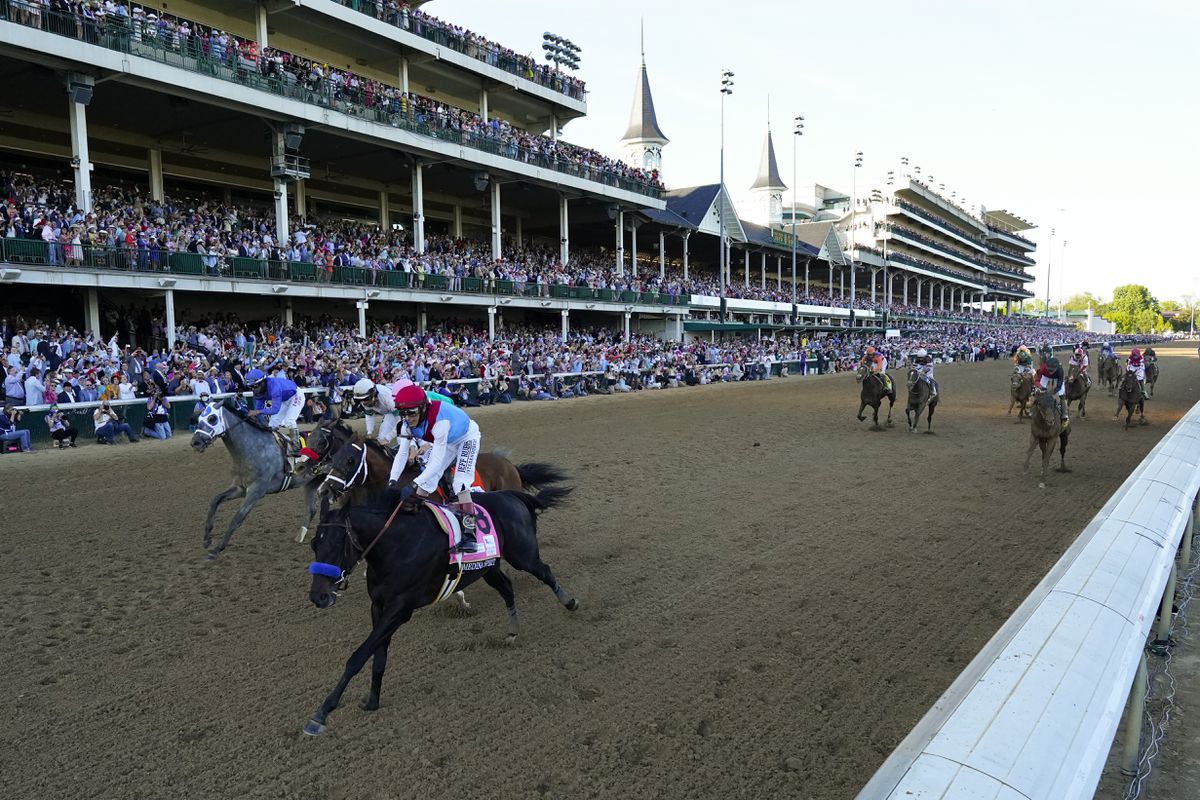 LOUISVILLE, Ky. — Churchill Downs suspended trainer Bob Baffert from entering horses at the track and suggested that it would invalidate Medina Spirit’s Kentucky Derby victory if the results of a failed postrace drug test are upheld.

The track said in a statement Sunday that failure to comply with the rules and medication protocols jeopardizes the safety of horses and jockeys, the sport’s integrity and the Derby’s reputation.

“To be clear, if the findings are upheld, Medina Spirit’s results in the Kentucky Derby will be invalidated and Mandaloun will be declared the winner.”

The only horse to be disqualified for medication after winning the Derby is Dancer’s Image in 1968.

Churchill Downs’ announcement comes after Baffert announced the failed drug test, which he vowed to fight “tooth and nail.” Medina Spirit is Baffert’s fifth horse to fail a drug test in a year.

Flanked by his attorney Craig Robertson in a morning news conference at Churchill Downs on Sunday, Baffert said his barn was told that Medina Spirit was found to have 21 picograms of the steroid betamethasone, double the legal threshold in Kentucky racing, in a postrace sample in the latest doping scandal for horse racing and arguably the sport’s premier trainer.

“I got the biggest gut-punch in racing, for something I didn’t do,” he said.

Baffert said his camp received the word of the positive test from Kentucky officials on Saturday. Baffert said Medina Spirit has not been officially disqualified from the Derby, though that still could happen after other tests and processes are completed.

“This shouldn’t have happened,” Baffert said. “There’s a problem somewhere. It didn’t come from us.”

Betamethasone is the same drug that was found in the system of Gamine, another Baffert-trained horse who finished third in the Kentucky Oaks last September.

Baffert denied any wrongdoing and said he did not know how Medina Spirit could have tested positive. He said Medina Spirit has never been treated with betamethasone and called it “a complete injustice.”

“I don’t feel embarrassed, I feel like I was wronged,” said Baffert, adding that he was going to be transparent with the Kentucky Horse Racing Commission.

“We’re going to show them everything. One thing about it in California, everything is documented every day what the horse gets. This horse was never treated with that. He’s a great horse, he doesn’t deserve this. He ran a gallant race.”

Medina Spirit won the Kentucky Derby on May 1 by a half-length over Mandaloun, giving Baffert his record-setting seventh victory in the race that starts the Triple Crown season. Medina Spirit is still expected to race in the Preakness, the Triple Crown’s second jewel, on Saturday.

The colt galloped Sunday at Churchill Downs and is expected to leave the track with stablemate Concert Tour and head to Baltimore on Monday.

Baffert was planning to saddle Medina Spirit and Concert Tour in the Preakness, going for a record eighth victory in the second jewel of the Triple Crown. Except for 2020 when the races were run out of order due to the coronavirus pandemic, Baffert is undefeated with a Derby winner in the Preakness, which holds its post position draw Monday.

He heads north under another cloud of scrutiny.

Last month, Baffert won an appeals case before the Arkansas Racing Commission, which had suspended him for 15 days for a pair of positive drug tests involving two of his horses that won at Oaklawn Park on May 2, 2020. The horses tested positive for lidocaine, a painkiller, which Baffert said they were exposed to inadvertently.

On Sunday, Baffert was adamant that Medina Spirit was not given betamethasone. He planned to submit hair, blood and DNA samples as part of the process, and stressed that his operation has been careful in following protocols.

But as Baffert insisted that horse racing can do better preventing doping, he also acknowledged the spotlight he’s under from the latest episode.

“I’m not a conspiracy theorist,” he said. “I know everybody is not out to get me, but there’s definitely something wrong. Why is it happening? You know, there’s problems in racing, but it’s not Bob Baffert.”

The New York Times said in November 2020 that Baffert-trained horses have failed at least 29 drug tests in his four-decade career.

“I’m worried about our sport,” Baffert said. “Our sport, we’ve taken a lot of hits as a sport. These are pretty serious accusations here, but we’re going to get to the bottom of it and find out. We know we didn’t do it.”