UAA’s Swirbul skis to another medal at World Junior Championships 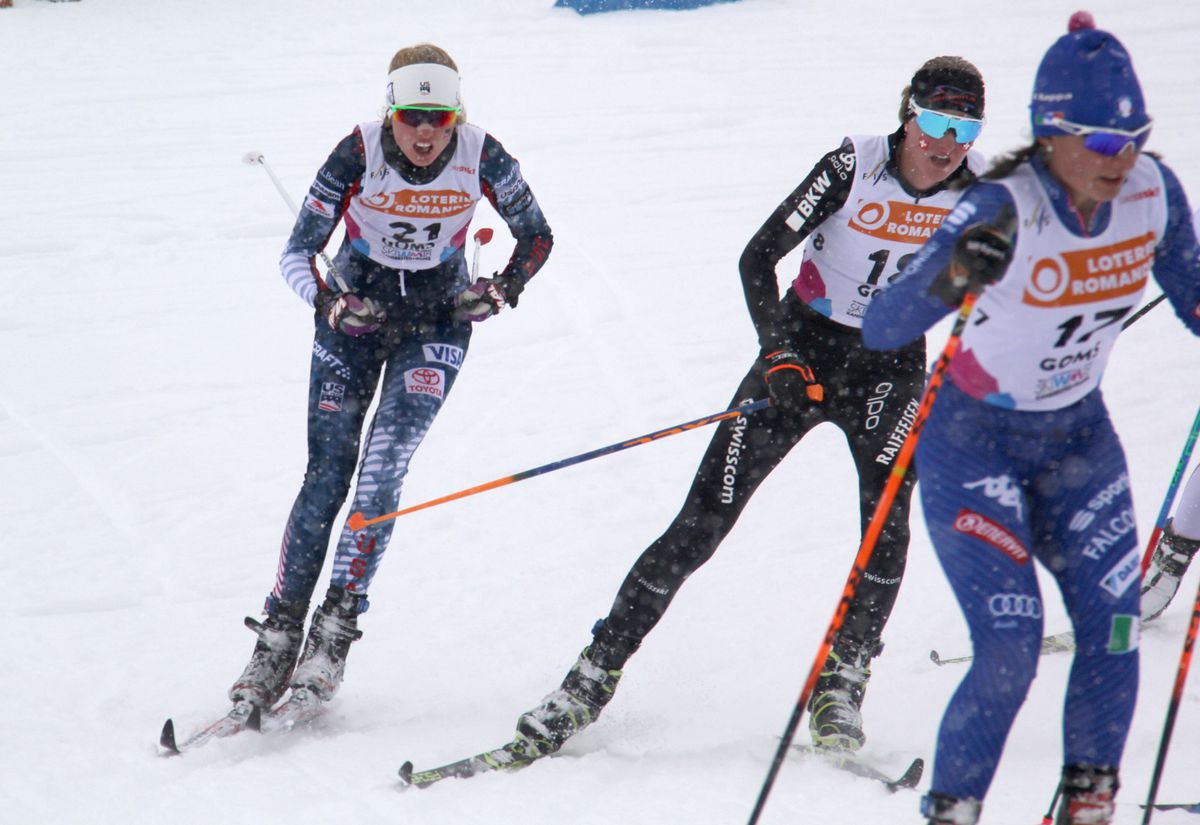 Hailey Swirbul of UAA (21) takes a corner during the 10-kilometer skiathon Thursday at the World Junior Championships in Goms, Switzerland. Swirbul claimed a bronze medal, two days after winning silver in the 5K classic.  (Photo by Glenn Gellert)

Hailey Swirbul of UAA (21) takes a corner during the 10-kilometer skiathon Thursday at the World Junior Championships in Goms, Switzerland. Swirbul claimed a bronze medal, two days after winning silver in the 5K classic.  (Photo by Glenn Gellert)

UAA sophomore Hailey Swirbul won another medal Thursday to became the most decorated American skier in the history of the World Junior Championships.

Swirbul grabbed third place in the women's 15-kilometer skiathon in Goms, Switzerland, to collect her second medal of the week and her third in two seasons. She's the only American to win three medals at the annual gathering of the world's best teen-aged skiers.

Swirbul's performance came two days after she claimed the silver medal in Tuesday's 5K classic. At last year's World Juniors, she was part of the bronze-medal-winning women's relay team.

Swirbul's three medals eclipse the two won last season by Vermont's Katharine Ogden. Ogden became the first American to win a  World Juniors medal by placing third in the women's skiathon and then picked up another bronze when she teamed up with Swirbul and two others for the women's relay race.

Swirbul used a strong effort in the freestyle portion of Thursday's race to reach the podium.

She was eighth after the 5K classic leg (17:34.9) but registered the second-fastest time in the 5K skate leg (15:24.6). She finished the race in 33 minutes, 31.9 seconds — seven-tenths of a second behind silver-medalist Lone Johansen of Norway and about 38 seconds behind winner Frida Karlsson of Sweden.

In the men's 20K skiathon, Anchorage's Gus Schumacher was the top American in 15th place.

Schumacher rode a strong classic leg to post his second top-20 individual result of the race series. He was 17th in Tuesday's 10K classic.

Hunter Wonders, who skis for APU and South High, finished 26th in 1:02:41.7. He was the third American finisher.

Two other Anchorage skiers competed in the women's race.

Natalie Hynes, a UAA sophomore from Whitehorse, was the top Canadian, placing 24th in 35:35.7. Anchorage's Molly Gellert, who skis for West High and the Alaska Winter Stars, was the third American, placing 40th in 36:55.1.