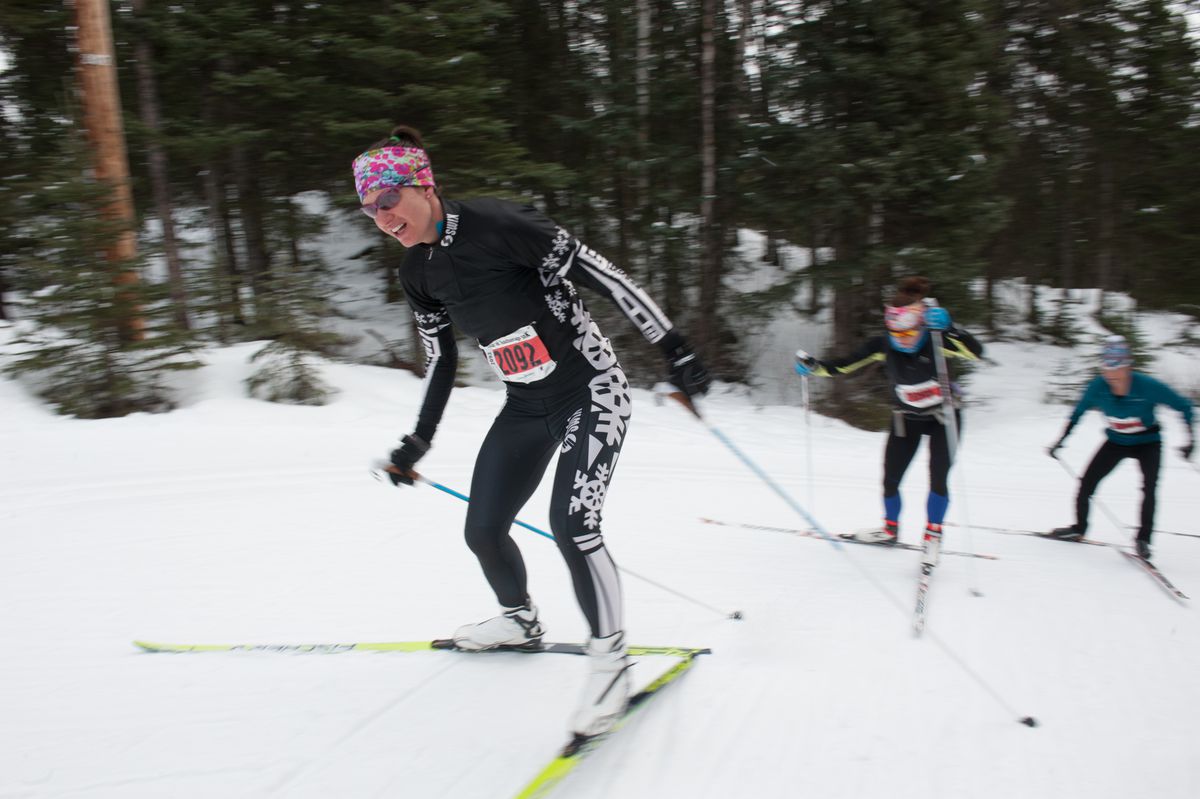 Joleen Corliss leads a group of skiers up a hill on her way to an 18th-place finish in the women's 50K race at Sunday's Tour of Anchorage (Photo by Michael Dinneen).

Joleen Corliss leads a group of skiers up a hill on her way to an 18th-place finish in the women's 50K race at Sunday's Tour of Anchorage (Photo by Michael Dinneen).

Patrick Johnson’s escape from snowmageddon led him back to Anchorage last week, where this winter’s snowfall seems quaint compared to what he left behind in Truckee, California.

Johnson, a Service High graduate, was heading this way anyway because he’s a coach for the Far West cross-country ski team, which will compete at the Junior National championships a week from now at Kincaid Park. He decided to come early to visit his family and ski in the annual Tour of Anchorage ski race.

And also to give his aching back a break.

“I was tired of shoveling,” Johnson said with a laugh Sunday after winning the Tour’s 50-kilometer race across Anchorage. “My back was in so much pain this week because I’ve been shoveling nonstop this winter.”

The Truckee area is buried in snow, with more than 300 inches falling at Squaw Valley. Johnson, 29, said the snow is piled so high in his yard that he can’t see out his first-floor windows.

The Tour trail offered just the right amount of snow for nearly 1,000 skiers and 200 fat-tire bikers who raced on it Sunday. The day was overcast with falling snow, but not a snowmageddon-like dumping.

Johnson broke away from Thomas O’Harra around Tudor Road and didn’t see another competitor after that. He won in 2 hours, 10 minutes, 41.8 seconds, nearly two minutes ahead of Eric Packer, who grabbed second place despite skiing with just one pole for about six kilometers.

Caroline Brisbois, a 23-year-old Alaska Pacific University graduate student, won the women’s 50K and placed 20th overall. She broke away from the other top women at the beginning of the race and won by 53 seconds over Jenna Difolco of Fairbanks.

“I expected to ski with the girls. It just so happened that I didn’t,” said Brisbois, who was coming off a fifth-place finish at last week’s American Birkebeiner.

At the end, she didn’t have the energy to keep up with a half-dozen men who she paced for much of the race. “I just got really tired and I seized up,” she said. “It was all about survival.”

The Tour of Anchorage has long been the city’s signature ski race, and this year it added a fat-tire bike division, which drew nearly 200 competitors. Skiers started in the morning; bikers started in the afternoon.

Derrick said he spent much of his ski race thinking about his bike race.

“The whole time I knew I couldn’t go hard because I’ve got another 50K of biking,” he said between his races.

His game plan for his 90 minutes between races? “I’m gonna go home, change, try to take a quick shower and warm up.”

“I had to make it work with one pole,” Packer said. “I was in a world of hurt, cramping and trying to hold it together until I got to Hilltop where one of my former coaches, Ben Arians, had a classic pole. It was a really awesome to get a new pole.”

He made do with one freestyle pole and one classic pole until someone handed him a freestyle pole about 13 kilometers into the race, putting Packer back in business. He skied in a pack with Johnston, Dawson Knopp and Cody Priest, and together they worked their way closer to the front.

“I had a super-fun time,” Packer said. “I was talking with my group and said (if) we work together and draft, we can do it. Galen and I broke away and we started catching third place, Arnaud, and when I caught up to him I said the same thing. We did 30-second pulls, switching off (the lead). It made such a difference cooperating.”

The teamwork helped Packer and Arnaud catch O’Harra, and then Packer pulled away from Arnaud to gain sole possession of second place.

“It was honestly one of the most fun races I’ve had in a long time,” Packer said.

The top three men and women in the 50K ski race each earned prize money ($1,000 for first place, $400 for second place, $200 for third place). As the winners, Johnson and Brisbois also won round-trip tickets on Alaska Airlines.

“I’ll use it to come visit my parents,” Johnson said. “Or maybe Cancun.” No need for snow shovels there.