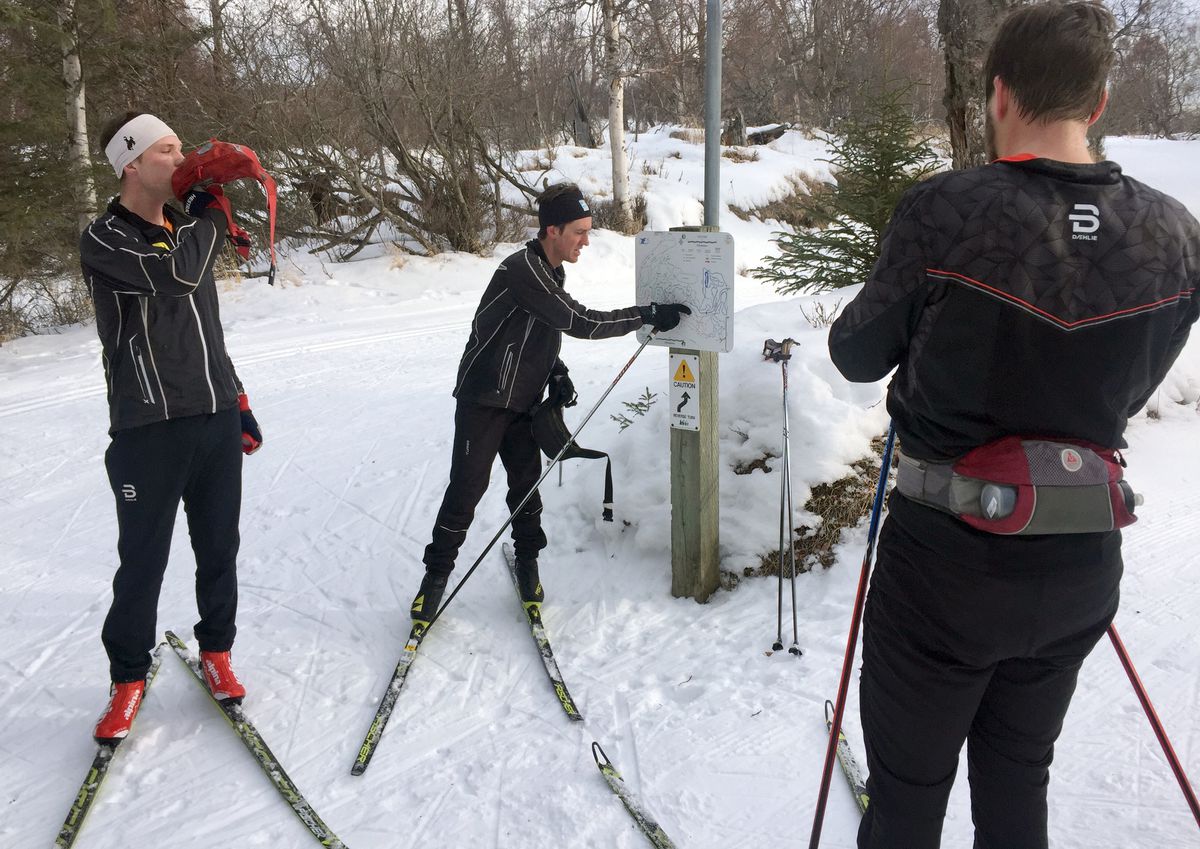 One is a marathon ski race. There other sounds like insanity, but because this is Alaska, a place where even urban adventures go to 11, it’s bound to become a thing.

They believe they’re the first to ski all of the city’s freestyle trails in a single day. They skipped several kilometers of narrow, classical-groomed trails at Kincaid Park and Russian Jack and missed a couple of short connecting trails at Kincaid, where there are numerous loops within loops.

“From what we’ve heard from other people, we’re the first to connect them all together,” said Brewer, 26.

“… Some people might give us some trouble that we missed some connector trails out at Kincaid, but we did the best we could without doubling back too much and keeping a forward momentum flow.”

The men started at sunrise at Bartlett High, where it took them a swift 18 minutes to ski those trails. It was getting dark when they finished at 8 p.m. near the Fred Meyer on Dimond Boulevard.

In between they skied nearly every kilometer of freestyle trails at Kincaid Park, the Coastal Trail, the Chester Creek trail, the trails at Alaska Pacific University and Russian Jack, the Tour of Anchorage trail, the Hillside trails and the Campbell Creek trail.

They were on skis nearly the entire time. They had to drive from Bartlett to Kincaid because Bartlett’s trails don’t connect to other Anchorage trails, and they had to walk across Lake Otis Boulevard and through some snowless tunnels on the Campbell Creek trail, Spangler said.

But other than that it was nearly all skiing, all the time.

They group stopped briefly to look at trail maps. They changed skis after 3.5 hours of skiing at Kincaid. They ducked into Spangler’s house next to Russian Jack to change clothes, eat and drink a little and grab Spangler’s dog Finn, who did the Russian Jack trails with them.

“After Russian Jack we dropped the dog off and we must’ve been at 55 miles at the point,” Spangler said. “It was 3 p.m. and we thought, ‘There’s not that much left,’ and then we realized we still had 40 or 50 kilometers of the Tour of Anchorage trail.”

“On the Hillside where it’s cooler (the trails) were actually glazed,” said Brewer, a mechanical engineer. “That made them really fast so we were really happy to run into snow like that.”

Spangler finished with a small blister on one hand. Priest, 30, had a sore shoulder Sunday. Brewer went to bed feeling his heart still racing and woke up hearing his stomach grumbling.

“It’s amazing how lucky we are to have this resource surrounding our city,” said Priest, an Alaska Nordic Racing coach who is helping Team Alaska at this week’s Junior National Cross Country Championships at Kincaid. Trail groomers from the city and the Nordic Skiing Association of Anchorage “do an amazing job,” he said.

Spangler, who along with his wife Nina runs a food cart in Juneau in the summer and substitute teaches in Anchorage in the winter, hopes other skiers take on the cross-town, cross-country tour of Anchorage.

“I’m kinda hoping someone else will do it and it’ll become a thing, kind of like the 12 peaks challenge,” he said, a reference to the Chugach Front Linkup, a series of 12 peaks in the Chugach Mountains that has become a one-day pursuit for some climber and hikers. “I’m hoping it’ll become the ski version of that.”

Brewer hopes so too.

“It’s a great thing just to promote all the trails here,” he said. “Just more people completing it would be great, but I feel like Anchorage is always a competitive town, so if people tried to beat our time it’d be a cool thing.”