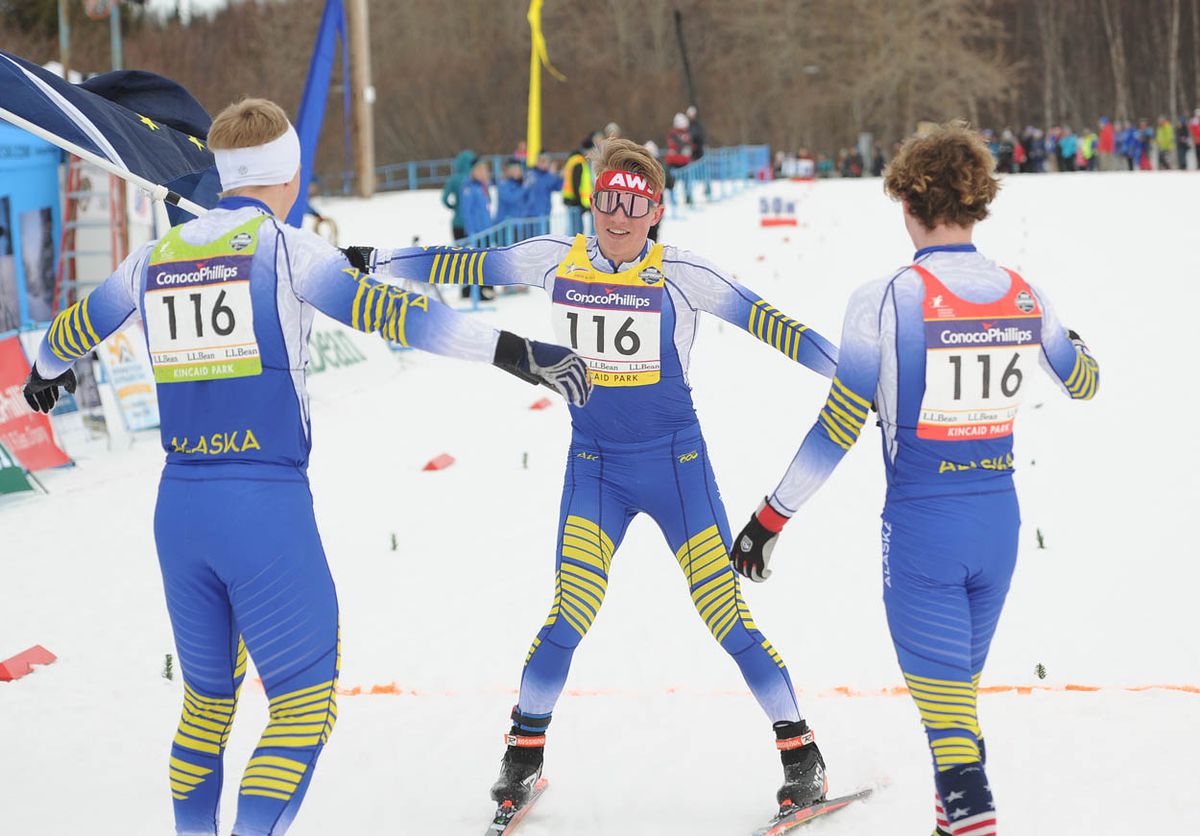 A golden week came to a golden finish Saturday for Gus Schumacher of Anchorage and Kendall Kramer of Fairbanks, who each collected one final victory on the last day of competition at the U.S. Junior National ski championships at Kincaid Park.

Both delivered sizzling anchor legs to key come-from-behind wins for Team Alaska in the 3x3-kilometer relay races. By doing so, each finished with four gold medals in four races during the week-long championships.

After claiming golds in all three of their individual races — often in dominant fashion — Schumacher and Kramer showed what they can do when they aren’t leading a race.

Both trailed significantly when they began their 3-kilometer legs. Kramer made up a 32-second gap to propel Alaska to a nine-second win in the U18 girls relay, and Schumacher closed a 25-second gap to put the U20 men’s team on top of the podium with an 11-second victory.

“No win is a given and every race is different — some are close, some are decided by a jury,” Schumacher said in a press release from the Nordic Skiing Association of Anchorage, referring to the jury decision that gave him gold in Wednesday’s sprint race. “But to produce in every race, and to do it here, is so cool.”

Schumacher’s final leg was so decisive he was able grab an Alaska flag to carry into the stadium and across the finish line, where teammates Karl Danielson and Kai Meyers greeted him with hugs.

Kramer’s anchor leg was equally stunning, and it put her on the on the podium with Garvee Tobin and Ivy Eski.

“Before this race, I was ready for it to be over. I’m so sore. But I’m really happy I got to end it with a bang,” Kramer said.

When Tobin tagged off to Kramer for the final leg, New England was winning and its anchor leg, Anna Lehmann, had already disappeared from view. Three kilometers proved more than enough real estate for Kramer to chase down the leader.

“I didn’t know how she was going to do it, but she’s Kendall,” Tobin said. “That was impressive.”

A third Alaska team was less than one second away from a gold medal.

The team of Alexander Maurer, Michael Earnhart and Zanden McMullen was the runner-up in the U18 boys relay, six-tenths of a second behind Intermountain’s winning time of 22 minutes, 44.2 seconds.

Alaska’s other team in the relay — Joel Power, Maxime Germain, Everett Cason — placed fifth in 22:58.1. They led after second leg but couldn’t hold on in the anchor leg, where Intermountain’s Johnny Hagenbuch rallied his team.

Kramer was also part of the U.S. team at World Juniors, where she placed fourth in an individual race and fourth in the relay.

Team Alaska and the Intermountain Division both won two relays apiece, and New England and the Midwest Division won one apiece.

New England finished the day with four medals to claim the Alaska Cup as the highest scoring team at the national championships. It finished with 1,427 points, Alaska placed second with 1,207 points and the Midwest Division was third with 973.