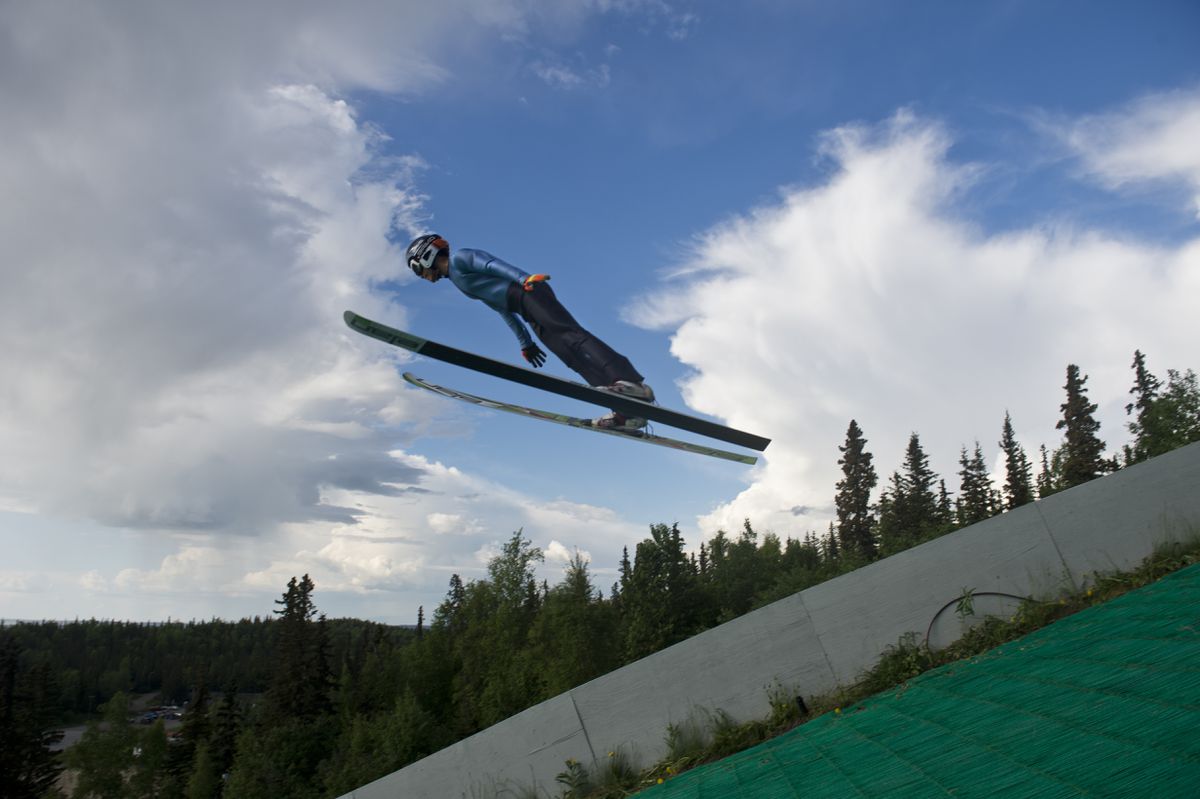 At age 15, Anchorage’s Carter Brubaker has already gone from worst to first, and he’s just getting started.

Brubaker recently was named to USA Nordic’s nordic combined junior team, becoming what is believed to be the first Alaskan to make a national team in the sport that combines ski jumping and cross-country skiing.

He didn’t see this coming two years ago, when he finished dead last at the 2017 U.S. junior national championships.

“It was my first taste of bigger competitions,” he said this week before a practice session at the Karl Eid Ski Jumps in South Anchorage. “I was super excited. I thought, ‘Oh, I’m so good,’ and then I was destroyed.

“That really motivated me.”

After finishing last in the U-16 boys division in 2017, Brubaker made the most of the home-hill advantage when the 2018 junior nationals came to Anchorage. He finished fifth to nab a spot in that summer’s Fly Guys program, a key component of USA Nordic’s development program.

As a Fly Guy, Brubaker spent a month in Colorado and Utah training with other young teens (the girls group is called the Fly Girls). Always a strong skier, Brubaker made significant gains in ski jumping and wound up winning the U16 championship at the Springer Tournee, an annual summertime jumping competition in Utah.

Then he grabbed fourth place at this year’s junior nationals in Utah — six seconds away from a podium finish — to secure a spot on the junior national team.

“He can take this as far as he wants,” said AK Team Ski Jumping coach Adam Loomis, a World Cup veteran from Wisconsin.

“He’s a super hard-working kid. He’s gotten to this point from hard work and support from his family and community.”

At last summer’s Fly Guys camp, Brubaker learned drills that make him more airborne, spent time flying off the world-class jumps at Steamboat Springs and listened to talks from Anchorage’s Alan Alborn, a three-time Olympic ski jumper who spoke to the group most nights about topics like nutrition and visualization.

The mental training was new to Brubaker, but it made sense.

“At a four-hour (ski jumping) practice you may only be in the air for maybe a minute,” he said. “So much of it is off the hill, and I had no idea about that till we did mental training.”

Ski jumping might be fun, but it’s fleeting. At a training session Monday night at the Karl Eid Ski Jumps, Brubaker made five jumps in a little more than 60 minutes. After each jump, he climbed about 250 stairs to return to the top of the 65-meter jump, the biggest of Anchorage’s four jumps. It was a warm evening, and after each jump he pulled down the top of his thick, spongy body suit before making the long climb up the stairs.

Summer jumping has been a thing in Anchorage since 2016, when expansion and improvements made it possible to jump here year-round.

It’s made a measurable difference, said Karen Compton, a co-chair of the Nordic Skiing Association of Anchorage’s ski jumping division.

She remembers when her sons, Gus and Hugo, started ski jumping several years ago. Only three other kids were in the program, she said.

And Brubaker isn’t the only one showing promise.

Skyler Amy, 13, placed sixth in the individual nordic combined competition at the junior national championships and teamed up with Brubaker to claim third place in the team sprint. That earned him an invitation to this summer’s Fly Guys training camp.

Amy will head to the Fly Guys camp in July. Brubaker leaves at the end of this month to train with the junior national team in Colorado and Utah and then he and his teammates will head to Europe for more training.

The dual-sport aspect of nordic combined keeps Brubaker busy even when he’s not with the national team. He trains six days a week — he’s with the Alaska Winter Stars on Monday, Wednesday, Friday and Saturday (including twice a day on Wednesday and Friday) and with Team AK Ski Jumping on Monday, Tuesday and Thursday.

Brubaker started out as a skier. He and his siblings — older brother Ryan, older sister Maya and twin sister Neena — all skied in Alyeska’s Mighty Mites alpine program and the NSAA’s junior nordic program.

When his brother decided to give ski jumping a try, Brubaker followed. He was about 10 when he made his first jump.

“I went off the 15-meter jump on alpine skis,” he recalled. “I almost wiped out. It was super-exciting.”

Brubaker liked how it felt to fly through the air, and soon he was training on both the ski jumps and the ski trails.

Now he hopes to help put Alaska back on the map.

“My immediate goal is to keep getting better and get more endurance for those 10K (ski races),” he said. And his long-term goal? “I really want to go to the Olympics.”

Alborn was the class of U.S. ski jumping a generation ago — in 2002, he set the U.S. distance record with a jump of 221.5, a standard that wasn’t broken until 2017 — but he’s the only Alaskan to go to the Olympics in either ski jumping or Nordic combined.

“We want to have more than one Olympian,” Compton said. “Carter is the very beginning of what we hope is the realization of that. If everything works out, he could do it.”