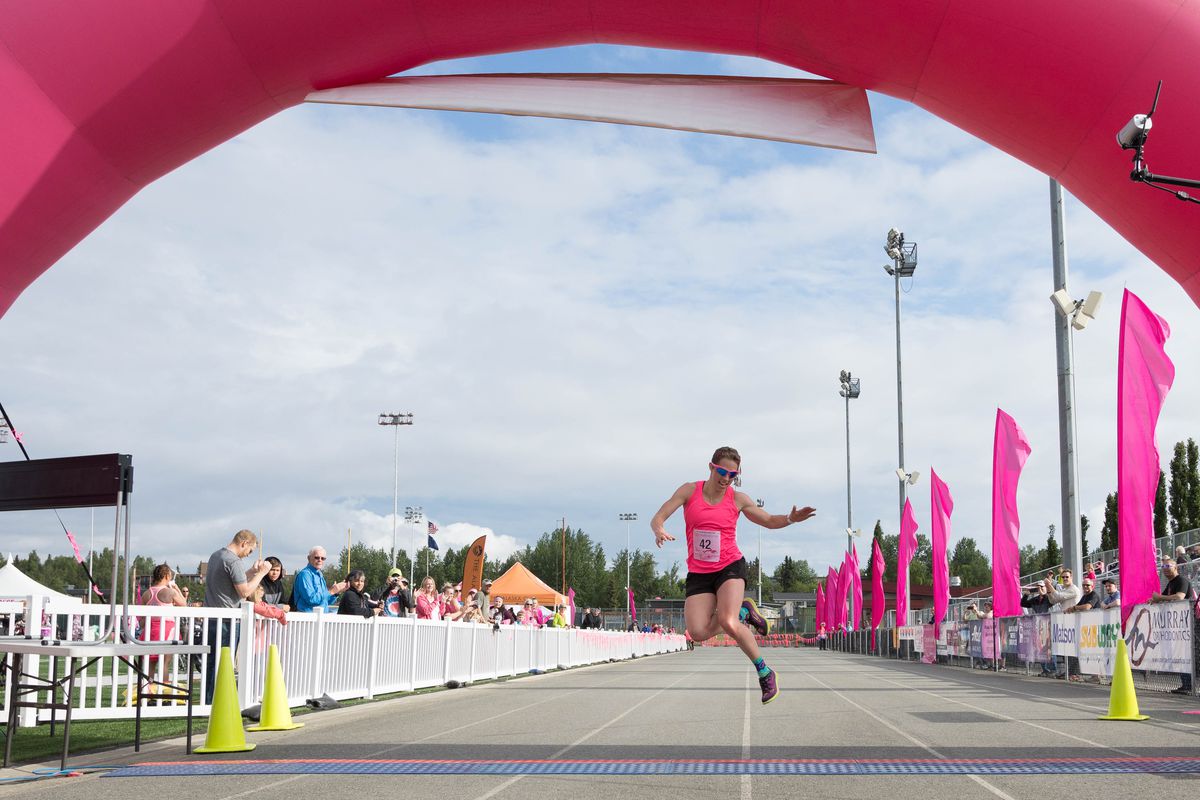 Kikkan Randall does her signature finish-line jump after capturing third place in the Alaska Run for Women in June. On Sunday, she plans to run the New York City Marathon. (Loren Holmes / ADN)

Kikkan Randall does her signature finish-line jump after capturing third place in the Alaska Run for Women in June. On Sunday, she plans to run the New York City Marathon. (Loren Holmes / ADN)

The message Kikkan Randall wants to send over the 26.2-mile New York City Marathon course is as clear as the writing on the loud socks she loves to wear: “It’s going to be OK” with a pink K in script symbolizing her name and so much more.

It’s a natural mantra for Randall, the Anchorage skier nicknamed “Kikkanimal” for the drive that led her to the United States’ first Olympic gold medal in cross-country skiing, along with teammate Jessie Diggins, at the 2018 Pyeongchang Games. And it’s one that has helped her power through treatment for Stage 2 breast cancer that was diagnosed three months after her Olympic triumph.

With chemotherapy (six rounds, three weeks apart) and a lumpectomy last November behind her, she will try something new Sunday, joining more than 50,000 runners in the New York City Marathon. She’ll use her appearance to bring awareness to AKTIV against Cancer, an organization co-founded by Grete Waitz, the legendary Norwegian runner who died of cancer in 2011. Its aim is to help cancer patients integrate physical activity with treatment. For AKTIV, more than 5,000 pairs of those wild socks have been sold.

"It's surprising how many similarities there are between being an athlete and being a cancer patient," Randall, 36, said in a phone interview. "As an athlete, I was always careful about not getting sick. I was always being sure to wash my hands and avoid public places, all that kind of stuff. You've got to get enough sleep, you've to eat right. You've got to get through a big process one step at a time. I just actually used some of the same tools and mind-set that I used as an athlete to go through my treatment."

[From Olympic gold to a breast cancer diagnosis: Read our series on Kikkan Randall’s year of triumph, uncertainty and hope]

Randall says she feels good now and is “like a little bee just buzzing around,” training for the marathon, making speeches, working with business partners such as L.L. Bean and raising son Breck with her husband, Jeff Ellis, at their home in Penticton, B.C. In June, she showed she was in race-shape by claiming third place in the Alaska Run for Women, where she completed 5 miles in 29 minutes, 29 seconds.

Randall was a talented high school runner at Anchorage’s East High, and over the years, even while focused on a ski career that took her to five Olympics, she thought about trying a long-distance footrace.

“I thought about running the marathon before I even finished my ski career," she said. "I had gotten involved with AKTIV against Cancer while competing in Norway. ... Every time the (U.S. Ski Team) and I would stop in Oslo, we would go work out with the cancer patients in the hospital in Oslo. I really believed in their concept and I knew they had a tie to the New York Marathon (through) Grete Waitz, the nine-time winner.

"One of my other teammates who also was pretty actively involved with them and was going to retire at the same time, we said, ‘Oh, wouldn’t it be fun if after we retired to go do the New York Marathon and run on behalf of AKTIV. It would be a fun new challenge for us.’ "

Randall announced in July 2018 that she was having treatment, writing on social media that “the color pink has taken on a new chapter in my life as I was recently diagnosed with breast cancer. Although we caught it early and the prognosis is good, my life will change quite a bit in the coming months. ... It’s a scary thing to learn you have cancer and I have wondered every day since how this could have possibly happened to me. But I have promised myself that I will remain positive and active and determined throughout my treatment. I am going to bring as much tenacity, strength, and energy toward this challenge as I have throughout my entire career.”

There were detours as she powered through treatment following the diagnosis of invasive ductal carcinoma. She focused on the short-term goal of being “as healthy and as rested as possible” for surgery.

“I just decided that the marathon will always be there and I was going to focus on treatment," she said. "I did end up going to New York for the AKTIV luncheon last year and I watched my teammates and some of our World Cup friends from Sweden run the race. I was in the finish area and watched them finish — I couldn’t help but get caught up in the energy and I said right then, ‘Oh, yeah, a year from now I’m going to be back here. I’m going to be running and I’m going to be feeling good.' ”

And she is. The trick, as Randall and anyone with a serious illness learns, is to be grateful for individual moments while also being hopeful about the future. Her treatment continues for now with a chemo drug and hormone treatments.

"Now that I’m mostly finished with treatment, I’m trying to continue with that mind-set but with the perspective of ‘I get to be out here doing things. I appreciate how good I feel. I am just incredibly grateful that my treatment was effective and that I do feel good,’ " she said. “I’m really trying to honor the experience and not take any moment for granted. I want to make the most of every day because you don’t necessarily know how many days you have. I’m positive and optimistic — trying to be in the moment while trying to be optimistic about the future.”

Randall has never run a full marathon and, although she has done long trail runs in Alaska and British Columbia, she hasn’t run that far on pavement. Her goal is to finish in under three hours.

“That sounded really reasonable off my 5K time, but now that I’ve done the training I realize that 26 miles is a long way and replicating that pace mile after mile is going to be challenging,” she said, “but I’ve been very public about my goal, and I’ve committed to it.”