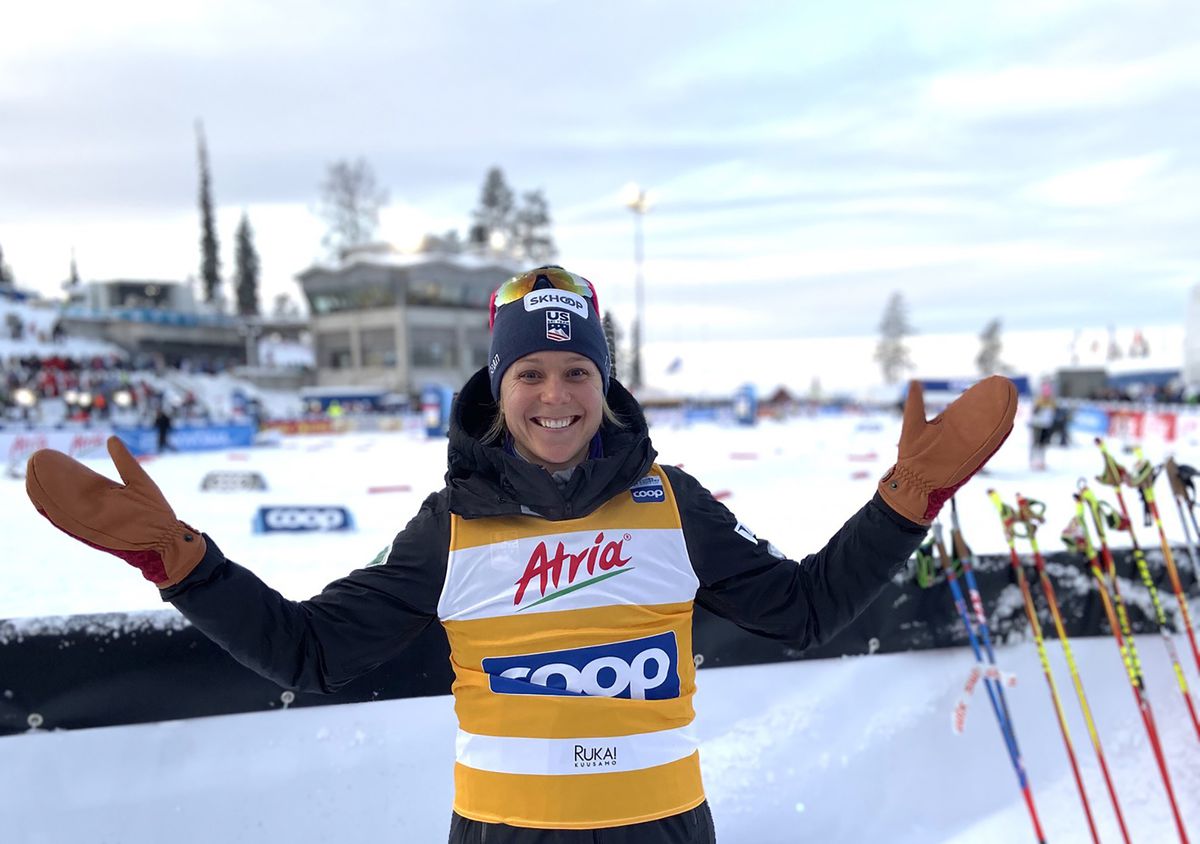 One of Sadie Maubet Bjornsen’s primary goals for the new ski season is to win her first World Cup race.

Two races into the season, the two-time Olympian from Anchorage is still looking for that elusive victory. But she’s on top of the cross-country ski world all the same.

Bjornsen placed fourth in the 10-kilometer classic race Saturday in Ruka, Finland, one day after placing third in a classic sprint race there.

The results catapulted her to the top of the World Cup overall standings, a place no other American woman has resided. Not even Kikkan Randall or Jessie Diggins, the skiers whose thrilling and historic team sprint victory was a highlight of the 2018 Winter Olympics.

Bjornsen, who celebrated her 30th birthday a week before the season-opening race series in Finland, was jubilant Saturday as she wore the yellow bib traditionally given to World Cup leaders.

“I am the World Cup overall leader, which is just incredible,” she said by email.

“The season is still young, so there is a lot to come, but over the years, I have worked very hard on my consistency among all the events in our sport. Last season I achieved the mark of winning a medal in all four disciplines we compete in, and now this is just one step further.

“… I will save that yellow bib forever to remind myself that at one point, I was the most consistent in the world.”

Bjornsen was one of seven skiers from Alaska Pacific University ski program who raced Saturday.

Rosie Brennan, the 2018 winner and 2019 runnerup in the Alaska Run for Women, equaled her World Cup career-best finish by grabbing sixth place, and Erik Bjornsen — Sadie’s brother — was the top American in the men’s 15K race with a 28th-place finish.

David Norris was 47th and Scott Patterson 69th in the men’s race. Rosie Frankowski placed 67th and Hailey Swirbul was 71st in the women’s race. Patterson’s sister Caitlin, a South High grad who trains in Vermont, placed 65th among women.

Brennan’s performance came a day after she qualified for the quarterfinals in the sprint race. She ranks 11th in the overall standings — which are based on results from both sprint and distance races — and is three spots ahead of Diggins.

Brennan went out early in the interval-start race, starting ninth in a field of 84. She said she had low expectations after warming up on what she called “the super steep hills here in Ruka,” and decided to start conservatively.

“I got to the first split, just over 1 (kilometer) into the race and I heard I was race leader ... so much for a plan,” she said by email. “After that I just kept trying to make up time in all the small spots. It worked well and I was greeted at the finish with a long stint in the leaders chair which is always a great way to start the season.”

Brennan, a 2018 Olympian, sat in the leaders chair for several minutes until winner Therese Johaug of Norway crossed the finish line with the day’s best time — 26 minutes, 47.5 seconds.

“She started quite a bit earlier than me,” Bjornsen said of Brennan, her roommate in Ruka, “so I channeled energy from her, because I kept hearing the loudspeakers announcing how well she was doing.”

Bjornsen will try to hold onto the World Cup overall lead Sunday when racing continues with a freestyle pursuit. Though she has become a well-rounded skier over the years, Bjornsen is still stronger in the classic technique than the freestyle technique.

On Friday, she earned a podium spot with a gritty performance in the finals of the classic sprint race. She got caught up in a tangle on the tight turn in the 1.4-kilometer course and was in fifth place by the time she worked her way out of it. She skied her way back to fourth place and secured third place with a finish-line lunge.

“I have always loved the courses here in Finland,” Bjornsen said on Saturday, “but it just feels like things came together for me. I managed to pace myself well, which was important after yesterday’s hard effort.”

Bjornsen gave credit after both races to wax technician Per-Erik Bjørnstad, who joined the U.S. Ski Team crew this season after spending the last decade with the Norwegian team.