With snow on the ground, ski trails are starting to shape up 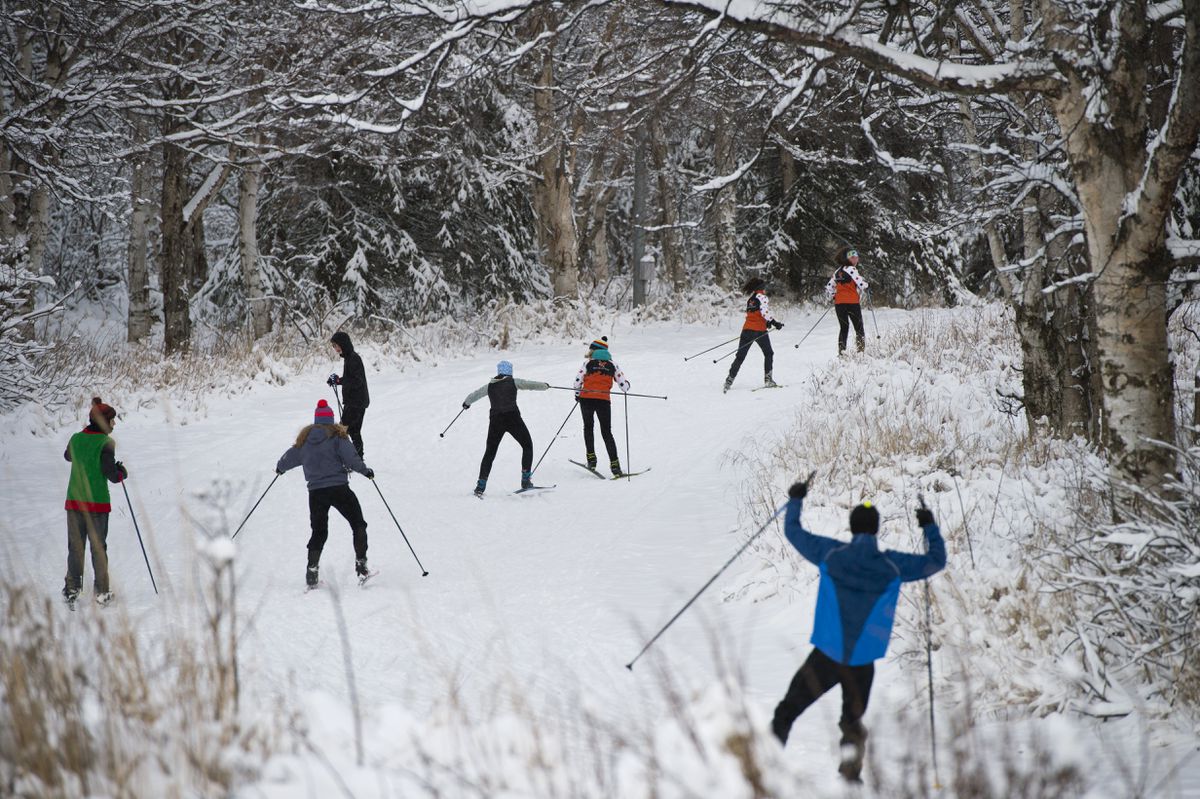 Snow guns are working around the clock at Alyeska Ski Resort to get the mountain ready for a Dec. 13 opening. Groomers at Kincaid Park and Hillside are working through the night packing snow. College and high school racers are preparing for weekend cross-country ski races.

December is here, and so is the ski season.

A webcam at the Kincaid Park stadium showed a swath of pristine snow with the occasional skier poling through Tuesday afternoon. North of Anchorage, there’s an abundance of snow at Hatcher Pass and enough at Government Peak for UAA and UAF to schedule a freestyle race there Saturday.

If there’s enough snow to set tracks for a classic-technique race, the college skiers will be back at Government Peak on Sunday. If not, they’ll head to Independence Mine, Dusser Bjornsen said.

“There’s so much snow there,” she said.

Hatcher Pass, one of the nation’s most dependable areas for early season snow, has been the go-to spot for the UAA team and other cross-country skiers the last few weeks, and the Mat-Su Ski Club has already hosted one race there, last month’s Race to the Outhouse.

“There’s stellar skiing and lots of snow up there,” said Mark Strabel of the Mat-Su Ski Club.

In fact, there’s too much snow in some places.

“At Archangel Road there’s currently too much snow for us to groom right now,” Strabel said. “We went out and attempted to groom it with a snowmachine and it was sinking like a good submarine.”

At Government Peak, three recreational trails were groomed Monday night and there are plans to groom more trails there, Strabel said. “As long as the temperatures stay below 32, it’s a great place to ski,” he said of Government Peak.

Anchorage’s recent snowstorm covered what had been a bare ground, allowing skiers to stay closer to home and try out trails ranging from the Hillside to the Coastal Trail.

There’s still not enough snow pack at Alyeska to open the full mountain to alpine skiers and snowboarders, prompting the Girdwood resort to push back opening day from Dec. 6 to Dec. 13. The mountain opened Dec. 14 last winter and didn’t close until late April.

“Right now we’ve got snow-making going at max production and we’re optimistic that conditions will allow us to make the snow that Mother Nature is not going to give us,” said Brian Burnett, the ski area’s general manager.

Alyeska’s three water pumps are working around the clock and shooting out 1,600 gallons of water every minute, Burnett said.

“We’re pushing with no limits,” he said. “We still can’t connect people all the way to the base of the Glacier Bowl Express. We’re still thin at mid-mountain. … But with every cold day, that’s improving.”

At Kincaid Park, skiers are gliding on natural snow, said Sara Kamahele of the Nordic Skiing Association of Anchorage.

“We’d been snowmaking on and off but unfortunately we got a lot of warm temperatures (last week),” she said. “If temperatures stay low we’ll continue to make snow even as the natural snow is coming down.”

Three trails at Kincaid were track-packed Monday and Tuesday by groomers — the Lekisch Trail, Margaux’s Loop and the Jodhpur Loop.

“The snowmaking loop is a work in progress, so we’re asking people to stay away from there,” Kamahele said.

Hillside trails also have been track-packed and should be in good shape for the first high school race of the season — Saturday’s Service Snowball freestyle race on the trails around Service High. The Beach Lake Trails in Chugiak aren’t in good shape yet, with standing water in a few places, Kamahele said.

Temperatures are forecast to remain in the teens and low 20s through Friday before a predicted warming on the weekend.

The longer those low temperatures last, the better for making snow and preserving what’s already on the ground. Burnett said Alyeska has 26 inches at the top of the mountain, 12 to 15 inches at the middle and a few inches at the bottom. As long as the temperatures stay low, the resort’s arsenal of more than 20 snow guns can keep blasting water into the air to create snow, he said.

“We’ve got all our guns going, and we’re pumping maximum water right now and the forecast looks really good through Friday for making snow,” Burnett said. “Hopefully we can connect the top, middle and bottom."