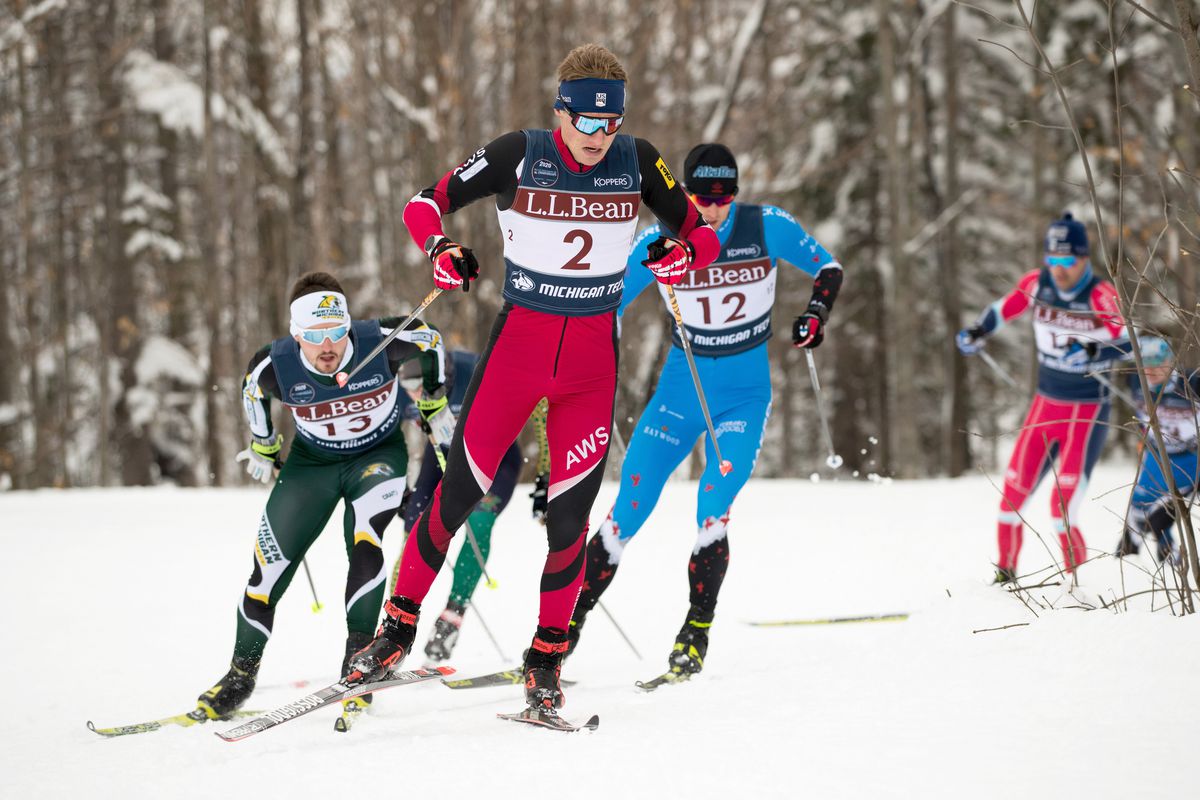 Gus Schumacher, shown here on his way to a national championship in the men's freestyle sprint earlier this year in Michigan, was was the top qualifier and seventh overall in the same event Saturday at the World Junior Championships. (Photo by Reese Brown / xcski.org)

Gus Schumacher, shown here on his way to a national championship in the men's freestyle sprint earlier this year in Michigan, was was the top qualifier and seventh overall in the same event Saturday at the World Junior Championships. (Photo by Reese Brown / xcski.org)

Triumph in the qualifying round and tribulation in the heats left Anchorage skier Gus Schumacher and his American teammates feeling deflated but driven Saturday at the World Junior Championships for cross-country skiing.

Schumacher, an Alaska Winter Stars skier and Service High graduate, was the No. 1 qualifier in the men’s freestyle sprint race on the first day of the championships in Oberwiesenthal, Germany.

He was one of four Americans and three Alaskans who finished the qualifying round in the top 21, but only one of them made it all the way to the finals.

Ben Ogden of Vermont finished last in the six-man race. Schumacher wound up seventh in the final standings, JC Schoonmaker of UAA was 13th and West High graduate Luke Jager was 18th.

That’s a robust day by most U.S. standards, but not for this group.

Schumacher, Jager and Ogden were members of last season’s gold-medal relay team, and Schumacher, for one, entered the championships with more medals on his mind.

“Overall I was super bummed to not advance to the final, but it wasn’t anything some time and watching Ben Ogden race the final couldn’t fix,” Schumacher said by email. “Our whole team is a little disappointed about how today ended up, but I think we’re really in a good (place) moving forward.”

Schumacher, 19, won the qualifying round by skiing the 1.3-kilometer course in 2 minutes, 26.34 seconds. Norway’s Ansgar Evensen, who went on to win the gold medal, was .16 of a second back and Ogden was third, 1.13 seconds back.

Schoonmaker, a sophomore at UAA from Tahoe City, California, was 4.76 seconds back in 11th place and Jager, a freshman at the University of Utah, was 6.42 seconds back in 21st place.

“Super cool to race a great qualifier right off the bat,” Schumacher said.

Schumacher, Schoonmaker and Jager all wound up in the same quarterfinal, but only Schumacher advanced to the semifinals.

“Our hope was to ski fast and get us all through as lucky losers, and we were skiing really powerfully but then Luke fell at the top of the biggest hill, luckily not impeding any of us, and I was the only one that ended up advancing,” said Schumacher, who won the quarterfinal.

In his semifinal, Schumacher placed third, less than half a second behind the winner. But he raced in the slower of the two semifinals and missed out on a lucky-loser spot in the finals.

“I started just an edge too slow and hit the first corner in the back and worked hard to get through the other racers and just got boxed in a few too many times to be able to really let loose,” he said.

The World Juniors and U23 include competition in cross-country skiing, nordic combined and ski jumping. Saturday’s race was for skiers under 20; on Sunday, U23 racing begins for skiers ages 20-23.

Among those scheduled to compete in the U23 freestyle sprint are Hunter Wonders, Hamish Wolfe and Hailey Swirbul of Anchorage. Wonders and Swirbul ski for the Alaska Pacific University nordic team, as does Jager; Wolfe is a South High graduate who is skiing on the Great Britain team.