US Ski Team puts 23 skiers on the national cross-country team, and 11 of them are from Alaska 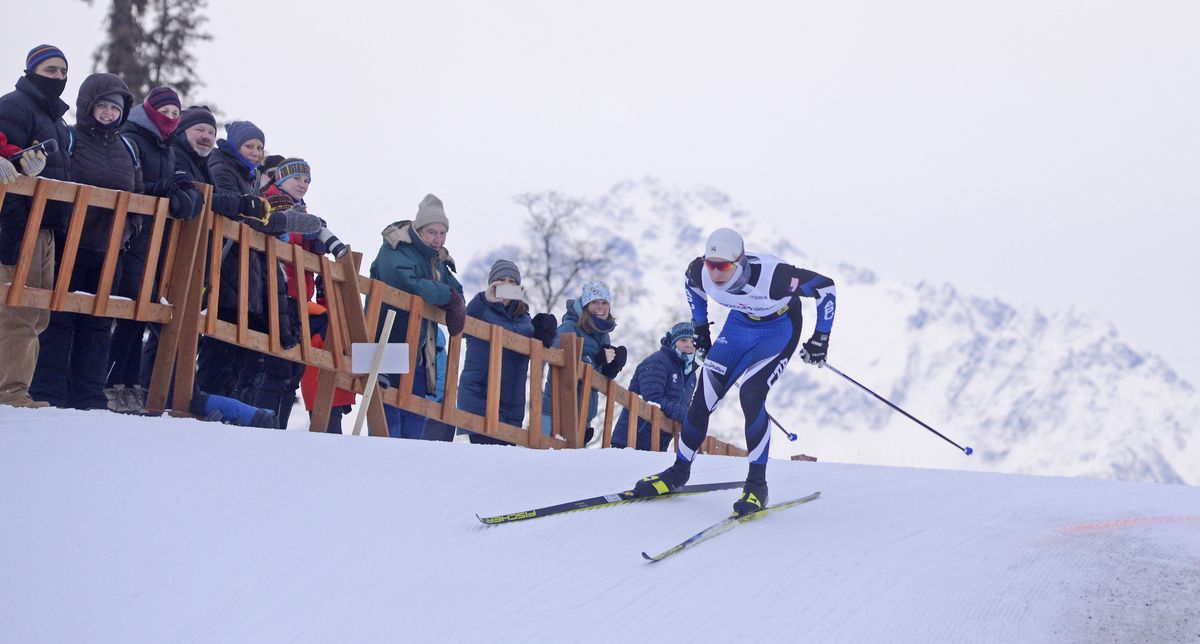 Hunter Wonders enters the finish chute on his way to a second-place finish at a February race at the Government Peak Recreation Area. (Photo by Eric Engman)

Hunter Wonders enters the finish chute on his way to a second-place finish at a February race at the Government Peak Recreation Area. (Photo by Eric Engman)

Anchorage skiers Hunter Wonders and Logan Hanneman are no strangers to the red, white and blue — both have represented the United States at a number of international ski races over the years, and Hanneman was even a member of the 2018 U.S. Olympic team.

But until now, neither were members of the U.S. Ski Team, the national team selected every spring by U.S. Ski & Snowboard.

It’s a season-long assignment that includes invitations to summer and fall training camps, access to national-team coaches, wax technicians, training facilities and sports medicine services, and increased racing opportunities. For skiers on the A and B teams, it comes with some financial support too.

“It’s awesome,” Wonders said Tuesday afternoon after a morning of skiing at Hatcher Pass. “It’s been a goal of mine, and I’ve been really close for a few years.

"... Alaska has that ability to produce some of the fastest skiers in the world. People here feed off each other.”

Other Alaskans on the team:

— Sadie Maubet Bjornsen of Anchorage, a two-time Olympian who ended the 2019-20 season as the third-ranked sprint racer and 16th-ranked distance racer in the women’s world rankings.

— Rosie Brennan of Anchorage, a 2018 Olympian who ranks 22nd in the world distance standings.

— Hailey Swirbul of Anchorage, who ranks 31st in the world distance standings.

— Gus Schumacher of Anchorage, who in March became the first American to win an individual gold medal at the World Junior Championships

— Scott Patterson of Anchorage, a 2018 Olympian.

— Kendall Kramer of Fairbanks, a member of the silver-medal women’s relay team at the 2020 World Juniors.

— JC Schoonmaker of Anchorage, an NCAA All-American for UAA who scored points in his World Cup debut in January.

— Hannah Halvorsen of Anchorage, a rising talent who was coming off her best season last year when she was seriously injured when hit by a car while crossing a street.

All but three of the skiers are from Alaska Pacific University’s nordic program. Schumacher trains with the Alaska Winter Stars, Kramer is a member of FXC in Fairbanks and Schoonmaker skis for UAA.

“We are excited for everyone,” APU coach Erik Flora said. "It’s almost like this energy that has been created about cross-country skiing in Alaska is just building and building.

“It’s about validation and reward, but most importantly they’re being asked to represent their country, and that means a lot. To put on that uniform, it shows what you’re doing is working. So making the national team is a big deal.”

It’s a big deal to Hanneman, even though his resume already includes the 2018 Winter Olympics and the 2019 World Championships.

“It’s a huge check off the list,” Hanneman said. “I’ve been really close for many years, and it’s always been this elusive goal out there. It’s not the end of the world if I don’t make the team, because you can qualify for the Olympics or World Championships without being on the team, (but) it’s fun to finally be able to say I’m a member of the U.S. Ski Team.”

Most of the Alaskans earned their spots by meeting objective criteria, which includes being ranked in the top 40 in the world FIS standings or achieving specific results in specific races. Halvorsen and Patterson were both medical discretionary choices.

Hanneman nailed down his spot by finishing the 2019-20 season as the 40th-ranked sprinter in the world. Wonders garnered his with an eighth-place finish in the 15-kilometer individual-start classic race at this year’s U23 World Championships in Germany. He needed a top-10 finish there to assure himself a spot on the team.

“When I came in I was sitting in the leaders chair for awhile, and every once in awhile someone would beat my time,” Wonders said. "Eventually the last person finished and I was still in the top 10 and I thought, ‘I finally made it!’ ''

Wonders is part of an 11-skier development team that is the biggest is U.S. Ski Team history. That team is loaded with young men determined to catch up to the American women, who emerged several years ago as a world power. Wonders was a member of the 2018 men’s relay team that won a silver medal at the World Juniors, along with Schumacher and Jager.

Chris Grover, a West High graduate who is the director of U.S. Ski & Snowboard’s cross-country program, said the 23 skiers on the national team is one of the strongest and deepest ever.

“This team offers so many ways to win,” he said in the press release announcing the team. "Athletes in this group have systematically broken down every barrier in cross country performance that traditionally blocked American athletes, including World Junior gold, to World Championships gold, to Olympic gold.”

Absent from the team are two men who are among the nation’s best, and who are also Alaskans.

Norris, who owns the Mount Marathon course record, ranks 43rd in the FIS standings — eight-tenths of a point away from the top 40, Flora said.

“He had a really good season. He’s the top men’s distance racer in the country and was the top finisher in 14 of 17 races, so clearly he’s making good progress,” Flora said. “Unfortunately, he missed the criteria. It was heartbreaking.”