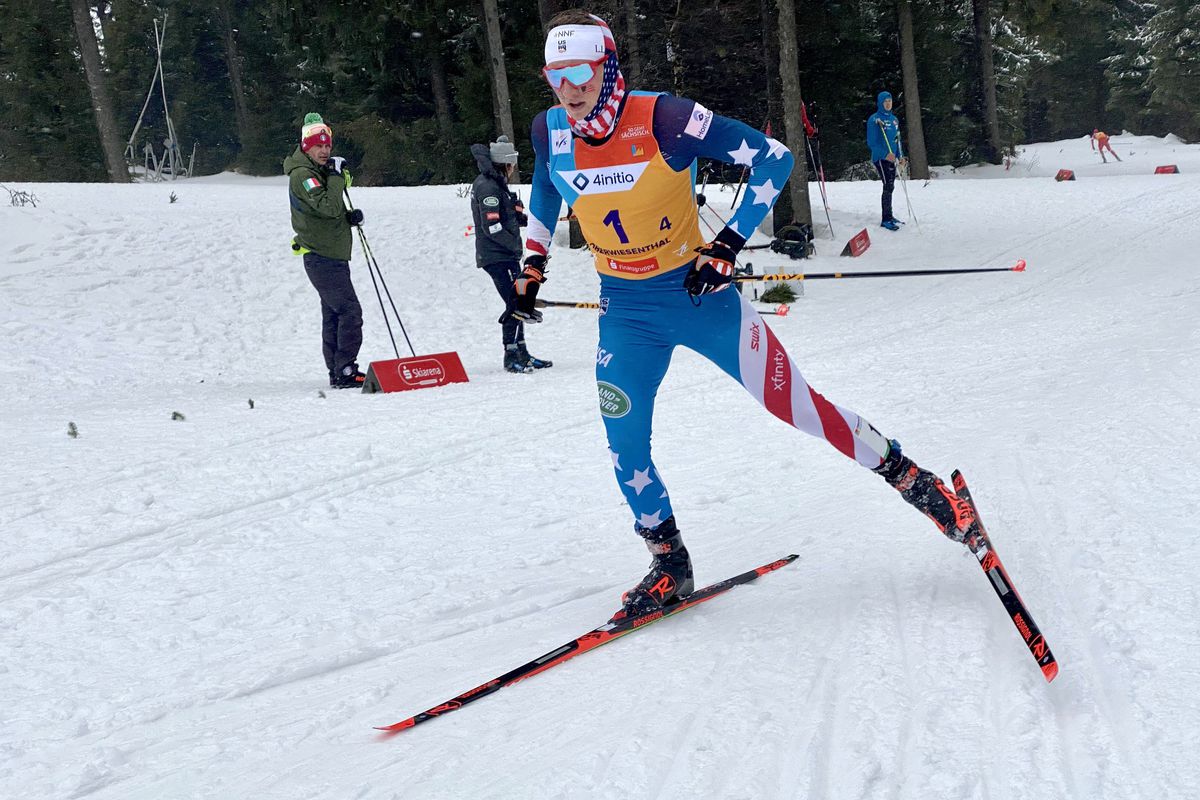 Gus Schumacher carries an American flag to the finish line of the men's relay race at the World Junior Championships earlier this year in Germany. (Photo by Jim Jager)

Gus Schumacher carries an American flag to the finish line of the men's relay race at the World Junior Championships earlier this year in Germany. (Photo by Jim Jager)

Schumacher, who trains with the Alaska Winter Stars, is the co-winner of the Beck International Trophy, which dates back to 1931 and has been presented annually since 1956 to America’s top skier.

Schumacher learned about his award from the award’s other winner -- U.S. Ski Team alpine star Mikaela Shiffrin, who called him with the news.

“Oh my gosh,” Schumacher said when he saw the call was from Shiffrin, who began by introducing herself.

“Yeah, I recognized you,” Schumacher replied. “I was not expecting you to call me.”

Schumacher is the third Alaskan and the first cross-country skier from Alaska to win the Beck International Trophy, joining Olympic medalists Tommy Moe (1994) and Hilary Lindh (1997).

He and Shiffrin are the first co-winners since 1983, when alpine skier Tamara McKinney and nordic combined athlete Kerry Lynch shared it. And he’s the first junior-level skier to merit the award since 1975, when Bill Koch won the first of his three awards.

A total of 68 skiers have won the Beck International Trophy over the years, with the first going to ski jumper Ottar Satre of Connecticut, an immigrant from Norway. It became an annual award in 1956, when alpine skier Buddy Werner won the first of his three straight awards.

Over the years, the Beck International Trophy has gone to U.S. Ski Team greats like Phil Mahre, Billy Kidd, Bode Miller, Jonny Moseley, Hannah Kearney and Lindsey Vonn. In three of the last five years, it has gone to a cross-country skier -- Jessie Diggins in 2016 and 2018, and Schumacher this year.

The best junior skier in the country for the last few years, Schumacher -- who moves into the senior ranks next season -- has collected medals at the last three World Junior Championships.

In 2018 and 2019 he was part of the U.S. men’s relay team that won silver and gold, respectively, with the 2018 second-place finish marking the first time any American men won medals at the prestigious meet for skiers under 20.

Schumacher and his teammates -- including Luke Jager of Anchorage -- repeated as gold medalists in the relay race at the 2020 championships. Schumacher finished this year’s World Junior Championships as the meet’s top skier.

Shiffrin, who this season added three World Cup victories to raise her career total to 66, won the Beck International Trophy for the fourth time. In a release from U.S. Ski & Snowboard, Schumacher said he didn’t understand how esteemed the award is until Shiffrin called and told him they were the co-winners.

“Wow, I didn’t know how big it was until I realized Mikaela was the other recipient," he said. "After that call, I realized it was a super big deal.”