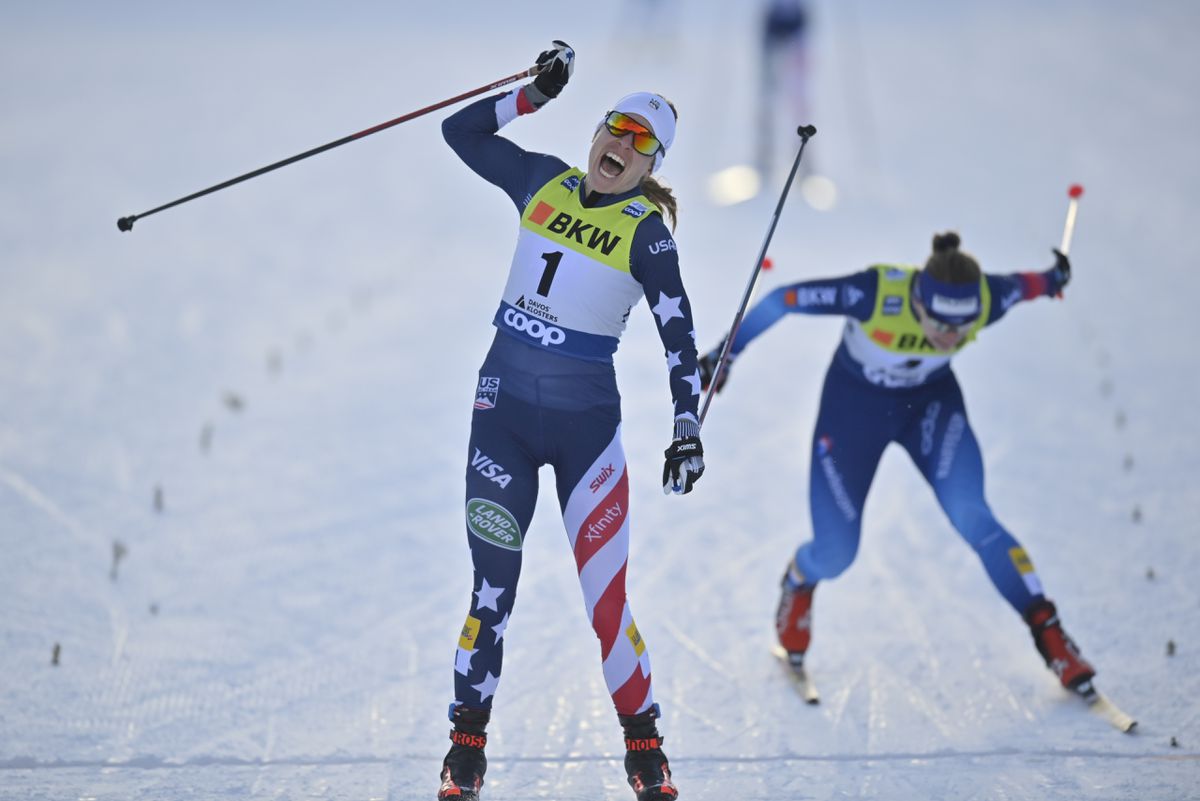 Brennan, an Alaska Pacific University skier who turned 32 last week, fought off a fast-closing field and a late-race case of the wobbles to lead a tremendous day for the Americans.

The victory comes after a stellar performance two weeks ago in the season-opening races in Finland, where Brennan notched two top-10 finishes in three races to rise to the No. 5 spot in the World Cup rankings.

After a week off from racing because of the cancellation of races in Norway, Brennan became the fifth American woman in history to win a World Cup cross-country ski race.

“Yikes, I’m not sure what to say other than I completely surprised myself today!” Brennan said by email.

[In her words: Brennan grapples with safety on the World Cup circuit]

She posted the fastest time in qualifying and made it through the quarterfinals and semifinals — where she advanced as a lucky loser — to claim a spot in the six-skier finals. There, she grabbed the lead on the final downhill and held on for the win.

“I was wobbling hard in the final stretch and could feel the others coming,” Brennan said. “I saw the line and didn’t see any ski tips in my peripheral and knew then that this was mine.”

Brennan won in 2 minutes, 37.36 seconds, beating Slovenia’s Anamarija Lampic by 0.28 of a second and Russia’s Natalia Nepryaeva by 0.49. Sophie Caldwell Hamilton of Vermont was nearly 7 seconds back in fifth place.

Ten U.S. skiers — half of them from Alaska — posted top-30 results to score World Cup points.

The American team took advantage of a field devoid of skiers from the powerhouse nations of Norway, Sweden and Finland, who put their seasons on pause after the season-opening races out of concern over COVID-19. The United States remains on the World Cup tour, as do numerous other nations, including always-strong Russia and Italy.

Logan Hanneman of APU made it to the semifinals for the first time in his career to lead the men’s team with a ninth-place finish.

Kevin Bolger of Utah and Simi Hamilton of Colorado finished 13th and 14th, JC Schoonmaker of UAA placed 18th and Gus Schumacher of the Alaska Winter Stars finished 25th. Schoonmaker, a junior from California, registered the fifth-fastest time in qualifying to lead the American men.

Frederico Pellegrino of Italy won the men’s race, followed by Alexander Bolshunov of Russia and Andrew Young of Great Britain.

Brennan was joined in the women’s finals by Caldwell Hamilton, who finished fifth. Julia Kern of Massachusetts placed 11th, Jessie Diggins of Minnesota was 13th and Hailey Swirbul of APU was 19th.

The race marked the return to competition for APU’s Hannah Halvorsen, an APU skier who a year ago was hospitalized with serious injuries after getting hit by a car. She finished 38th in the qualifying round, which sends 30 skiers to the quarterfinals.

Brennan, a World Cup veteran and a 2018 Winter Olympian, now sits in the No. 3 spot in the World Cup rankings. Historically a better distance skier than sprint skier, she has a chance to seize the lead in a 10-kilometer raced Sunday in Davos. Ahead of her in the rankings are leader Therese Johaug of Norway — who currently isn’t competing — and Tatiana Sorina of Russia.

“I have never considered myself a true sprinter and chose to race today to get prepped for tomorrow so this is completely shocking to me,” said Brennan, who placed 17th in the first World Cup sprint of the season two weeks ago.

“I know I am in really good shape and my skate skiing has improved so much so I am just so excited to have these opportunities to race. I am just racing with with the utter joy of being able to race and the fighting spirit to get through these tough times.”

Brennan said she’s typically slower than others at the start of a sprint race, and that was the case in the quarterfinals and semifinals.

“(I) tried to use the long stretch heading into the second lap to make moves and then do what I can to hold it into the finish,” she said. “That was working well so by the time I made it to the final, I decided to just put the pedal down as early as I could manage. I had a much better start and found myself with an open lane up the steep climb and just decided to leave absolutely everything I had over the top of the climb.”

Like Brennan, who years ago moved to Anchorage from Utah to train with the APU ski team, Keisel turned into a world-class skier during her time in Alaska. She was a member of Jim Mahaffey’s ground-breaking team at Alaska Methodist University; the school went on to become APU, whose ski program headed by coach Erik Flora has continued Mahaffey’s legacy.