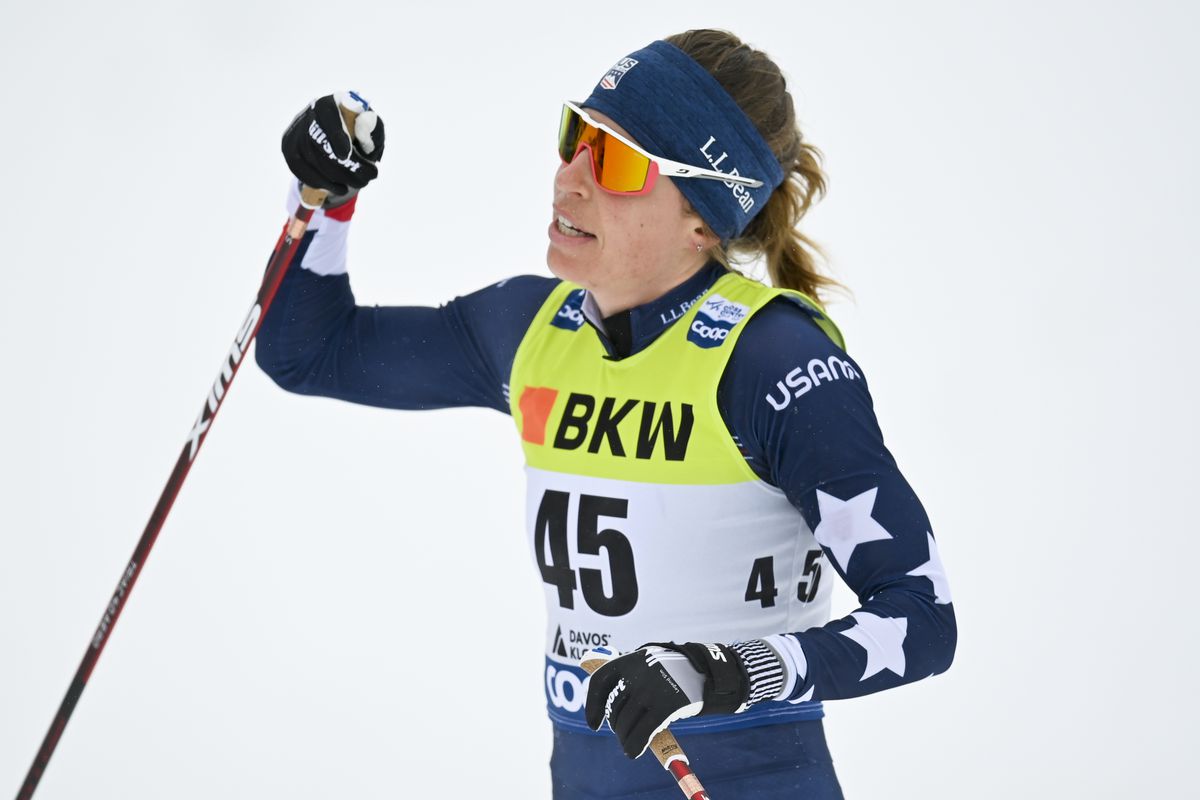 Rosie Brennan catches her breath after taking a 34-second win that puts her atop the World Cup overall standings. (Gian Ehrenzeller/Keystone via AP)

Rosie Brennan catches her breath after taking a 34-second win that puts her atop the World Cup overall standings. (Gian Ehrenzeller/Keystone via AP)

As the World Cup leader, Brennan will wear the coveted yellow bib that goes to those who sit atop the rankings. It’s just the second time in history an American woman has earned the right to wear the yellow bib.

“That is quite honestly something I’m not sure I’ve ever even dreamed of,” Brennan said by email.

Brennan, 32, annihilated the field in the 10-kilometer freestyle race in Davos, Switzerland, one day after she scored a surprising victory in the freestyle sprint.

She won Sunday’s race by a commanding 34 seconds, a victory made sweeter by the fact she shared the podium with Alaska Pacific University teammate Hailey Swirbul. Swirbul, 22, earned her first World Cup podium finish by placing third, 40.5 seconds behind her training partner.

“When I crossed the line, Hailey was keeping the leaders’ chair warm for me and so I knew she must have had a good race too, then when I finally sat down and saw she was going to get a podium, I was just beside myself,” Brennan said by email. “She’s been the one pushing me all summer and keeping me on my toes and really forcing me to broaden my skills so I am just so excited to share this with her.”

Back at ya, Swirbul said.

“Having strong teammates is often something I take for granted because I am with them almost every day of the summer, like Rosie,” Swirbul said by email. ”She has been so focused, believed in herself and worked diligently toward this goal, and it has definitely inspired me to see her dedication.

“Our team pushes each other every day to make ourselves better, but also each other. I’m proud to be part of Team USA and APU today!”

It was a good day all around for the Americans, especially the Alaskans.

[In her words: Rosie Brennan grapples with what’s safe and what isn’t on the World Cup circuit]

Scott Patterson of APU registered a career-best finish in a 15-kilometer race by placing 16th, marking the fourth time he has posted a top-20 World Cup result. Gus Schumacher of the Alaska Winter Stars was 35th.

The strong results come a week after Norway and Sweden, two juggernauts of the sport, withdrew from World Cup competition because of COVID-19 concerns. Finland and Canada have also decided not to compete.

But don’t put an asterisk on Brennan’s victories.

A 2018 Winter Olympian, she ranked 17th in last season’s final overall standings and 14th in the distance rankings. Coming into Davos, she ranked fifth overall after three excellent races at the season-opening series two weeks ago in Finland, where everyone but the Canadians raced.

This weekend’s gold medals vaulted her past previous World Cup leader Therese Johaug, the Norwegian star who won all three races in Finland.

Brennan is the second American woman -- and the second Anchorage woman -- to lay claim to the World Cup’s yellow bib. Sadie Maubet Bjornsen was the World Cup leader for a brief time early in the 2019-20 season.

Bjornsen, who went on to finish eighth overall last season, is skipping this season’s early races and will join her teammates in Europe after the holidays.

The sprint victory was a surprise, because Brennan is traditionally stronger in distance races, but she had high hopes for Sunday’s interval-start race, held on trails where she had a sixth-place finish in a 10K freestyle two years ago.

“I set out as smooth and controlled as possible and quickly learned my pace was good enough for the win so I just kept chugging along,” she said. When she received a split-time informing her another skier was 10 seconds off her pace, “that sounded a bit too close for comfort for me so I really doubled down and tried to just carry all the speed I could through the (final two kilometers).”