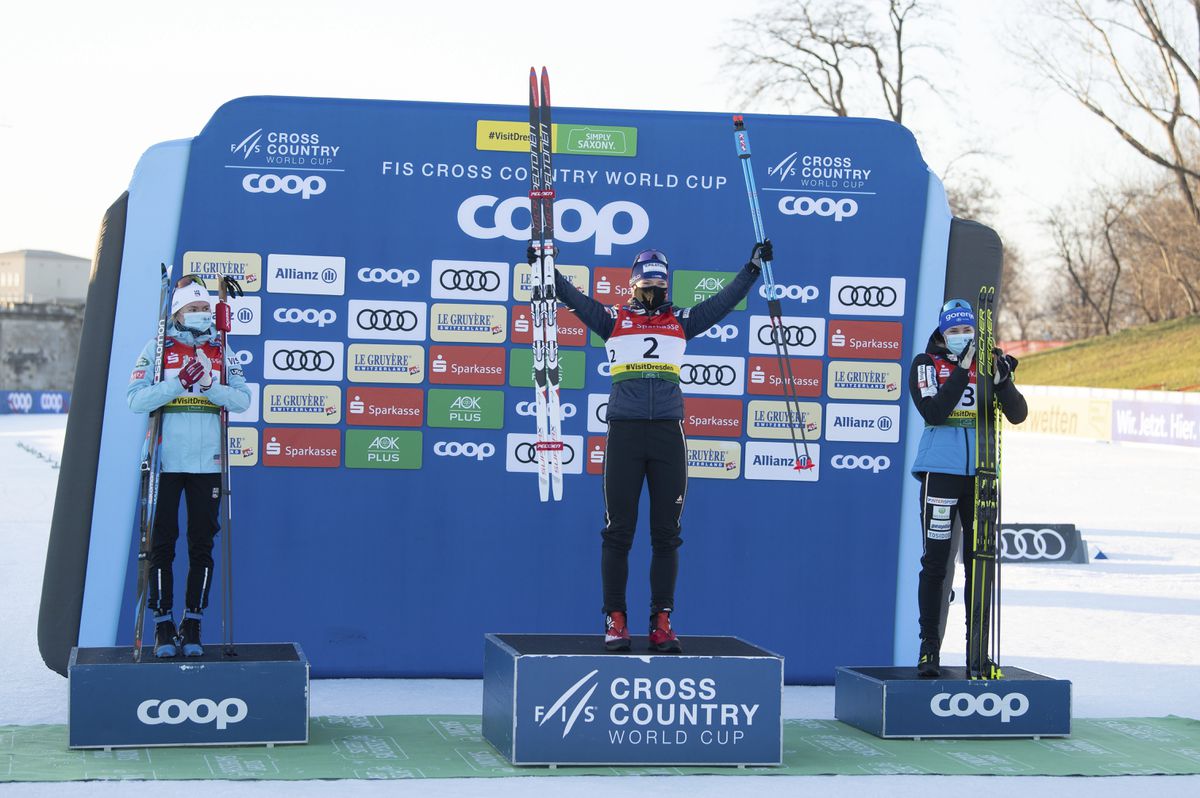 Sophie Caldwell Hamilton from USA, Nadine Faehndrich from Switzerland and Anamarija Lampic from Slovenia, from left, stand next to each other during the award ceremony of the cross country skiing World Cup in Dresden, Germany, Saturday, Dec. 19, 2020. (Sebastian Kahnert/dpa via AP)

Sophie Caldwell Hamilton from USA, Nadine Faehndrich from Switzerland and Anamarija Lampic from Slovenia, from left, stand next to each other during the award ceremony of the cross country skiing World Cup in Dresden, Germany, Saturday, Dec. 19, 2020. (Sebastian Kahnert/dpa via AP)

World Cup leader Rosie Brennan of Anchorage took a break from action Saturday, giving some of her U.S. Ski Team teammates a chance to claim the spotlight that shined so brightly on Brennan in recent weeks.

Two of her Alaska Pacific University teammates were among those who stepped up in a freestyle sprint race in Dresden, Germany.

Logan Hanneman made it to the semifinals for the second straight week and Hannah Halvorsen advanced to the quarterfinals to score World Cup points for the first time in her career.

They were among eight American skiers whose qualifying-round efforts put them in the quarterfinals, a group that also included UAA skier JC Schoonmaker.

Four Americans made it all the way to the finals. In the women’s race, Vermont’s Sophie Caldwell-Hamilton grabbed the silver medal and Minnesota’s Jessie Diggins finished one spot off the podium in fourth place. In the men’s race, Simi Hamilton — Caldwell-Hamilton’s husband — placed fifth and Idaho’s Kevin Bolger was sixth.

The race was a huge breakthrough for 22-year-old Halvorsen, and not just because it was the first top-30 finish of her World Cup career.

A year ago, she was recovering from serious injuries suffered on Nov. 1 when she was hit by car while in a crosswalk in downtown Anchorage. Two torn ligaments in her left knee, a broken tibia, a skull fracture and a traumatic brain injury put her in the hospital for weeks.

[A year after suffering debilitating injuries, Anchorage skier Hannah Halvorsen is headed to the World Cup]

She didn’t ski for nearly an entire year and decided to make her comeback on the World Cup circuit because so many races in the United States have been canceled because of COVID-19. She placed 38th last week in a sprint race in Davos, Switzerland — her first race in more than a year — and improved to 23rd place Saturday in Dresden.

“Racing today was a huge accomplishment for me on so many levels,” Halvorsen said by email. “To be healthy enough to be able to put a bib on and stand on the start line, to be able to be with my teammates again, and to also make my first World Cup points.

“It has taken a lot of work to get here with a lot of support from coaches, teammates, friends and family, and I can’t wait to see what the rest of season will bring.”

Saturday marked back-to-back semifinal appearances for Hanneman, a 2018 Winter Olympian who grew up in Fairbanks.

He finished 12th Saturday, placing third in his quarterfinal heat and sixth in his semifinal heat. Combined with last week’s ninth-place finish in Dresden, Hanneman ranks 11th in the World Cup sprint standings.

He has advanced to the quarterfinals in previous World Cup seasons, but until this month he had never gone as far as the semifinals.

“I am just really excited and pleased to see progress and to feel like I can be competitive in the heats now,” Hanneman said after the Davos race.

Just missing Saturday’s semifinals was Schoonmaker, who like Hanneman continues to impress in sprint races. He skied in the same quarterfinal heat as gold-medalist Federico Pellegrino of Italy and placed third, .29 seconds away from earning a semifinal spot.

Taking the gold medal in the women’s race was Nadine Faehndrich of Switzerland. Absent from the scene are skiers from always-strong Norway and Sweden, who pulled out of competition after the season-opening races in Finland, citing concerns over the COVID-19 virus.

Brennan, a 2018 Olympian who won both races last week in Davos, is skipping the races in Dresen so she can prepare for the upcoming Tour de Ski.