18 months after his return was announced, Trond Flagstad is a UAA ski coach again 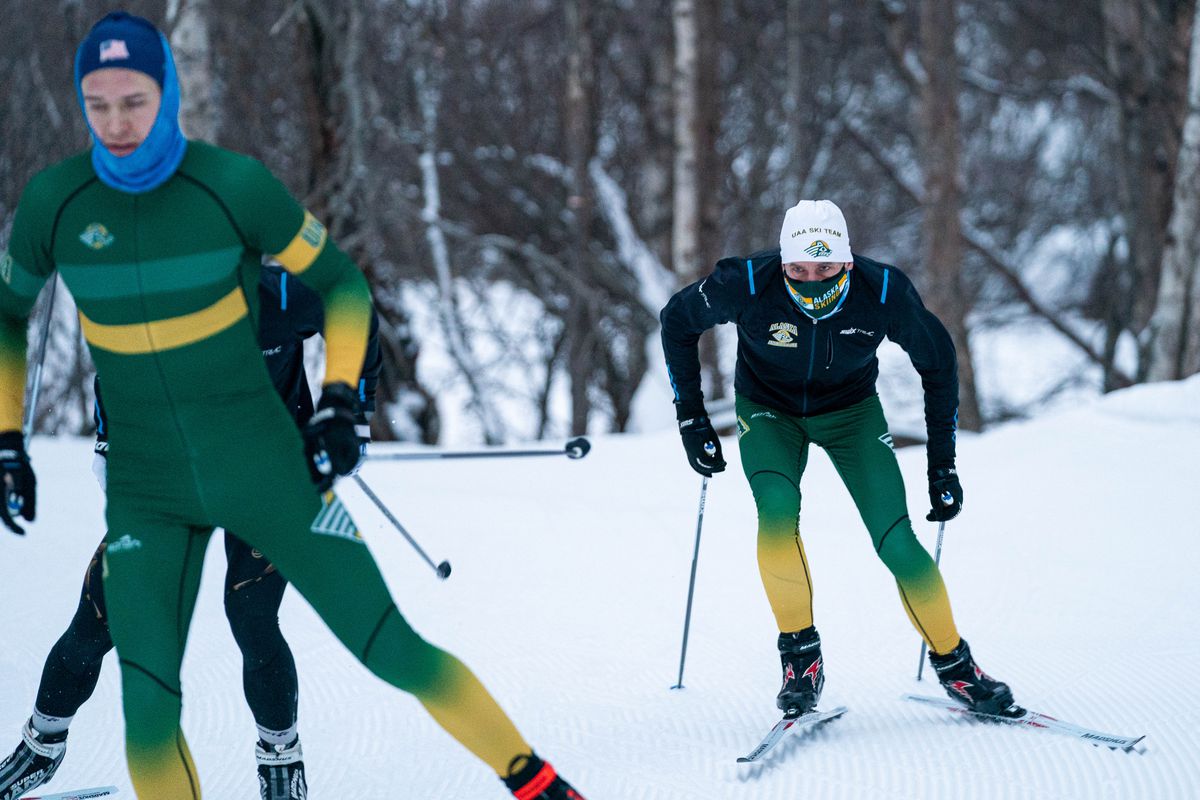 UAA coach Trond Flagstad, right, skis with the Seawolves at a practice at Kincaid Park. This is Flagstad's second stint at UAA, a return delayed by 18 months by immigration issues. (Loren Holmes / ADN)

UAA coach Trond Flagstad, right, skis with the Seawolves at a practice at Kincaid Park. This is Flagstad's second stint at UAA, a return delayed by 18 months by immigration issues. (Loren Holmes / ADN)

Depending on how you look at it, Trond Flagstad is two months into his job as the cross-country ski coach at UAA — or he’s approaching the two-year anniversary of his return to the Seawolves.

Either way, he’s amassed a lot of frequent-flyer miles in the last year-and-a-half.

And the Seawolves got a full season of world-class coaching for free.

Flagstad, 50, is a Norwegian who coached the Seawolves from 2001-11, presiding as head coach during some of the program’s greatest successes.

After teaching P.E. in Anchorage for a couple of years after that, Flagstad and his wife, Lindsey, moved to Norway in 2016 so their three children could absorb the language and culture their dad grew up with. Flagstad got a coaching job at a sports academy in Lillehammer, where he helped develop some of Norway’s top junior-level skiers.

The family always intended to come back to Anchorage, and in May 2019 UAA announced that Flagstad was returning as the cross-country ski coach.

Then things got crazy.

Over the next 18 months Flagstad made four trips between Norway and Alaska because of immigration issues; during one stretch of several months, he spent one day with his wife.

A green card holder since 2001, Flagstad was denied a re-entry permit to the United States because he remained in Norway one year too long.

His only option was to get a new green card, a process he thought would take about three months. Lindsey, a vegetation ecologist, found a job in Anchorage and Flagstad came back on a tourist visa, which allowed him to stay for three months at a time but wouldn’t let him work.

“So I started volunteering with UAA because we just assumed I’ll get my visa in September or October, and October comes around and my three months are up, so I went back to Norway for three weeks,” Flagstad said. “I came back for three months, and went back to Norway in February. I came back, and then the spring and summer comes and there’s movement in the visa process, so it looks like it may happen in the summer.

“The kids had a long summer break, so we went back to Norway and Lindsey stayed here to work.”

The end of summer came, and still no visa. School in Anchorage was happening remotely because of COVID-19 but in-person classes were happening in Norway, so the family decided Flagstad would stay in Norway with the three kids — 13-year-old Vebjorn, 10-year-old Aksel and 8-year-old Niva.

“That was the one positive thing,” Flagstad said. “The kids were able to go to in-person classes.”

Flagstad finally got an appointment for an interview on Oct. 22 at the U.S. embassy in Stockholm, Sweden, and after less than 10 minutes, his green card was approved. He could come back to Anchorage and begin his job with the Seawolves.

But what about the kids and school?

“We wanted to let the kids finish school there, but I needed to come back (to Anchorage) as soon as possible so I could start working,” Flagstad said. “In early November Lindsey came to Norway, and I saw her for one day and then I flew back here. I started work as soon as I could and Lindsey worked remotely while the kids finished up school before Christmas.”

Now, everyone is reunited. Flagstad, Lindsey and the kids. And Flagstad and the Seawolves.

“It wasn’t ideal,” UAA head coach Sparky Anderson said, “but it was just a matter of waiting, and Trond is worth the wait.

“The kids all know him, they’re used to his training plan and they know his coaching style. Trond is super well-respected in the skiing community and certainly as a coach. He brings a lot back to UAA.”

During their wait for Flagstad, the Seawolves had a more-than-capable Plan B in the form of Marine Dusser, an All-America skier for UAA who became the assistant coach in 2017.

When Flagstad’s visa issues prevented him from starting the job, Dusser was promoted to head cross-country coach. She guided the Seawolves through a season that ended abruptly halfway through the NCAA Championships because of COVID-19; before the championships were cancelled, four of Dusser’s athletes skied to All-America honors.

By that point, Anderson said, the job was Dusser’s.

“Trond could come in as an assistant,” he said, “but it really was Marine’s job.”

But Dusser and her husband — Anchorage skier Erik Bjornsen, a two-time Olympian who retired after the 2019-20 season — decided to start a business in Washington’s Methow Valley, where Bjornsen grew up. And that put Flagstad back in business.

“When she left, it was a no-brainer. We’ve got Trond and he’s still willing to come in,” Anderson said. “I feel lucky.”

The two men believe it’s possible for the Seawolves to not only improve on that program-best finish of fourth place at the 2009 NCAA Championships but also to contend for the national title. Flagstad is a fierce competitor — one of Alaska’s great mountain runners, he’s a two-time winner of Mount Marathon — and he has grand ambitions for UAA.

“The big thing is both Sparky and I know realistically we can do this, and that is to win the team championship,” Flagstad said. “That’s the biggest thing, to get the team to improve on that fourth place, and of course having individual champions — that comes with the territory.”

Like Anderson, Flagstad thinks his return to UAA was worth the wait, despite all of the delays and the flights back and forth between his homeland and his adopted land. Compared to what others go through in their immigration efforts, Flagstad said he had it somewhat easy.

“I think for some people, they don’t know if they’re going to get it. We were pretty sure there was no way they could deny me,” he said. “We were just worn out in a way. We were so tired of it, and there was also the economic part of having one job and three kids and having to travel back and forth.”

Now the Flagstads are back in the Potter Valley house they built themselves — in true Alaska fashion, it started as a wood-frame cabin and was expanded with the help of friends — and life has settled down.

“We’re relieved and happy,” he said.