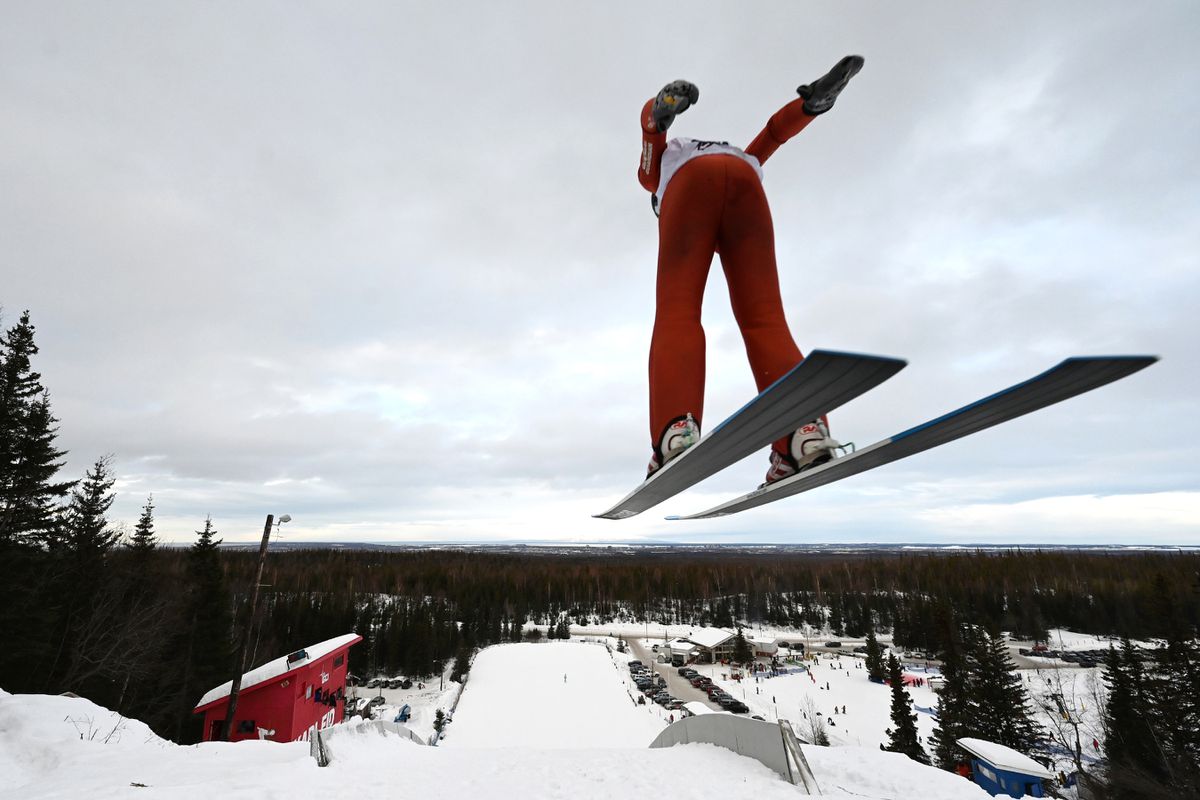 Hilltop Ski Area and Hillside Park are weekend magnets for skiers and snowboarders. You can find some on Hilltop’s alpine slopes, some on the Hillside cross-country trails and some circling the overflow parking lot.

Some escape the crowds by soaring above it all, although even the skies are getting a bit crowded as more and more kids discover the Team AK ski jumping club.

The club, part of the Nordic Skiing Association of Anchorage, is the second-biggest in the country, with 54 members ranging in age from 4 to 17. The only bigger club is in Steamboat Springs, Colorado, the mecca of American ski jumping.

Sustaining the growth is Team AK’s embrace of nordic combined — the sport that is one-part ski jumping and one-part cross-country skiing. It’s a perfect blend for many Alaska kids: so many of them have grown up on skis, and what kid doesn’t like jumping off things?

“The feeling of when you’re in the air, that sensation is marvelous,” 11-year-old Julia Oswald said Sunday after twice flying 30 meters off the 40-meter jump at the Karl Eid Ski Jumping Complex, once in warmups and once in competition.

Oswald was one of about two dozen Team AK athletes who competed in ski jumping and nordic combined events Saturday and Sunday at the complex, which has four jumps — 10 meters, 20 meters, 40 meters and 65 meters.

The best of the bunch was 15-year-old Skyler Amy, a freshman at Service High who started ski jumping when he was 5. A next-door neighbor had four kids who jumped, and one day Amy went to the jumps with them. He was hooked.

When Team AK revved up its nordic combined program a couple of years ago, Amy continued to soar. A member of the Alaska Winter Stars and a top high school skier for the Service Cougars, he was a perfect candidate for nordic combined.

Zak Hammill has been a Team AK coach since 2013 and last May became the program director for ski jumping and nordic combined. He has seen the club grow and thinks nordic combined could bring continued growth.

About 90% of the kids who jump also do nordic combined, he said.

“The nice thing about Anchorage is so many kids have a background in skiing, so we don’t have to teach them the basics of skiing,” Hammill said.

Last Saturday, Amy finished 12th for Service at the first Cook Inlet Conference cross-country race of the season at Kincaid Park, and the next day he was on the Hillside winning the U16 boys nordic combined race.

Amy wasn’t the fastest skier on Sunday — that honor went to Team AK’s Ronen Woods, who beat Amy by two seconds in the 5-kilometer ski race. But Amy prevailed by virtue of superior jumping — he flew 55 meters on his first jump in the 65-meter hill and 58.5 on his second jump, while Woods jumped 51 and 50 meters to finish in second place.

Oswald paced the girls on both days in both jumping and nordic combined. On Sunday, when the older girls competed on the 40-meter hill, she was the only girl to fly 30 meters.

Hammill likes to see girls try nordic combined, which, remarkably, is a Winter Olympics sport for men but not for women. He thinks women will compete at the Olympic level “sooner rather than later,” and that opportunities for women are growing as a result.

Twelve-year-old Jamay Wingard started jumping at age 7 after pestering her parents about it. She’s also a dancer, which “helps with my power in my legs,” she said. Legs and lungs also get a workout at the ski jumps, where the only way to top of the 40-meter and 65-meter jumps is a long climb up roughly 200 steps.

“It’s not that hard till you put on the boots that feel like Legos,” Wingard said.

Only one Alaskan has competed in ski jumping or nordic combined at the Olympics — Anchorage ski jumper Alan Alborn, who competed at the 1998, 2002 and 2006 Winter Olympics, posting career-best finishes of 11th in both events at the 2002 Olympics in Salt Lake City.

“It’s cool,” Hammill said. “Our No. 1 goal is to have fun and introduce kids to ski jumping, but we’re also shooting for kids to make junior national teams. With Carter making the Youth Olympic team last year and World Juniors this year, it’s a stepping stone for our club.”

Even better is the belief that while Brubaker is the first, he might not be the last.

“We know we have athletes like Skyler and Ronen behind him,” Hammill said. More young jumpers are following too, as they touch the sky over the Hillside.

This story has been updated to clarify that the Hillside cross-country trails are not part of the Hilltop Ski Area.