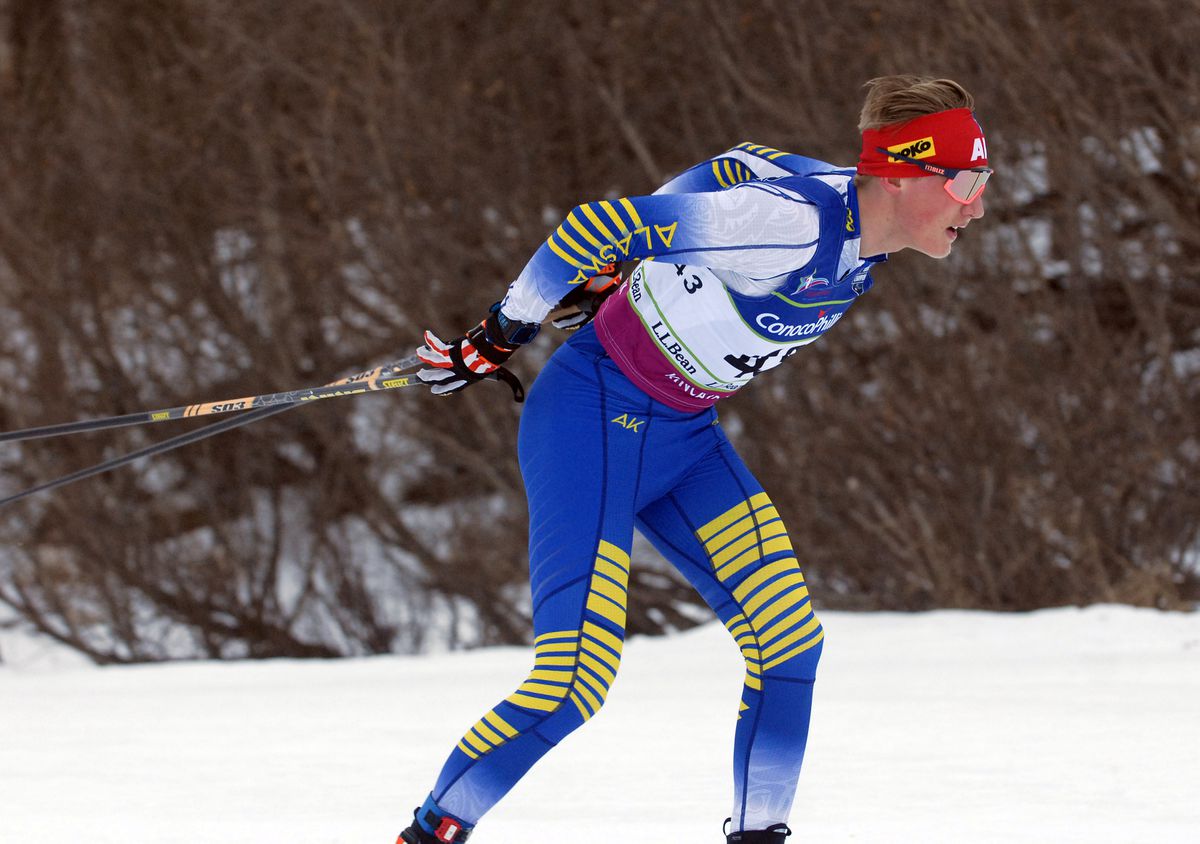 Gus Schumacher, shown here at the 2019 U.S. Junior Nationals at Kincaid Park, is one of nine Alaskans headed to the U23 and World Junior cross-country ski championships. (Matt Tunseth / ADN archives)

Gus Schumacher, shown here at the 2019 U.S. Junior Nationals at Kincaid Park, is one of nine Alaskans headed to the U23 and World Junior cross-country ski championships. (Matt Tunseth / ADN archives)

The United States cross-country team that assembles next month in Finland for the World Junior and U23 World Championships will look a lot like what you might see at an Anchorage Cup race at Kincaid Park.

Among the 22 skiers named to the team are nine Alaskans, plus two more who were tabbed as alternates.

The U23 men’s team is nearly all Alaskan — Gus Schumacher, Luke Jager, Hunter Wonders and JC Schoonmaker, all of Anchorage. Crashing the party is Vermont’s Ben Odgen.

The World Junior team includes three Alaskans — Zanden McMullen of Anchorage and Michael Earnhart of Eagle River on the boys team and Kendall Kramer of Fairbanks on the girls team.

Two other Anchorage skiers are alternates — Kai Meyers for the U23 men’s team and Garvie Tobin for the World Junior women’s team.

No one will carry more momentum into the Feb. 8-14 championships than Schumacher, a 20-year-old Alaska Winter Stars skier.

Schumacher has emerged as an American leader in his rookie World Cup season. Earlier this month he placed eighth in a 15-kilometer race in Italy, finishing 11.4 seconds behind World Cup leader Alexander Bolshunov of Russia, and his subsequent 18th-place overall finish in the Tour de Ski was the best in history by an American man.

The Tour de Ski is a series of eight races at three venues in 10 days and is generally considered one of the most taxing events in the sport — physically and mentally, as Schumacher will attest.

“My first thoughts right after this tour were basically, ‘What now?’ It was so much time being ready to go fast that I didn’t really let myself mentally relax until after it was all over,” Schumacher said by email.

It was a rewarding 10 days, he said, a span that culminated with the Tour’s famous hill climb up a steep alpine ski slope in Val di Fiemme, Italy. He placed 19th in that race.

“That last stage definitely lived up to its reputation as a crazy race format,” he said. “A couple of times we turned a corner to see a new part of the course and I was shocked even after watching past races and knowing it was a real alpine hill. Definitely a cool feeling to have finished such an iconic event.”

Schumacher said he would get some rest before resuming training with the U.S. U23 and World Junior teams in Finland. After that, he’s expected to make his World Championships debut in Germany.

“Should be a fun winter,” he said. “And now, more than ever, I’m so thankful to have so much support from my team here and all of my community at home. It means so much to me to hear those messages when I’m away for so long. I couldn’t be here without all those key people.”

Schumacher became the first American to win a World Junior gold medal in an individual race; he and Jager both skied legs on the gold-medal men’s relay team, and Kramer skied a leg on the silver-medal women’s team.

Schumacher and Jager graduate to the U23 ranks this year, but Kramer is still a junior and is considered a medal threat, both individually and as a member of the relay team.