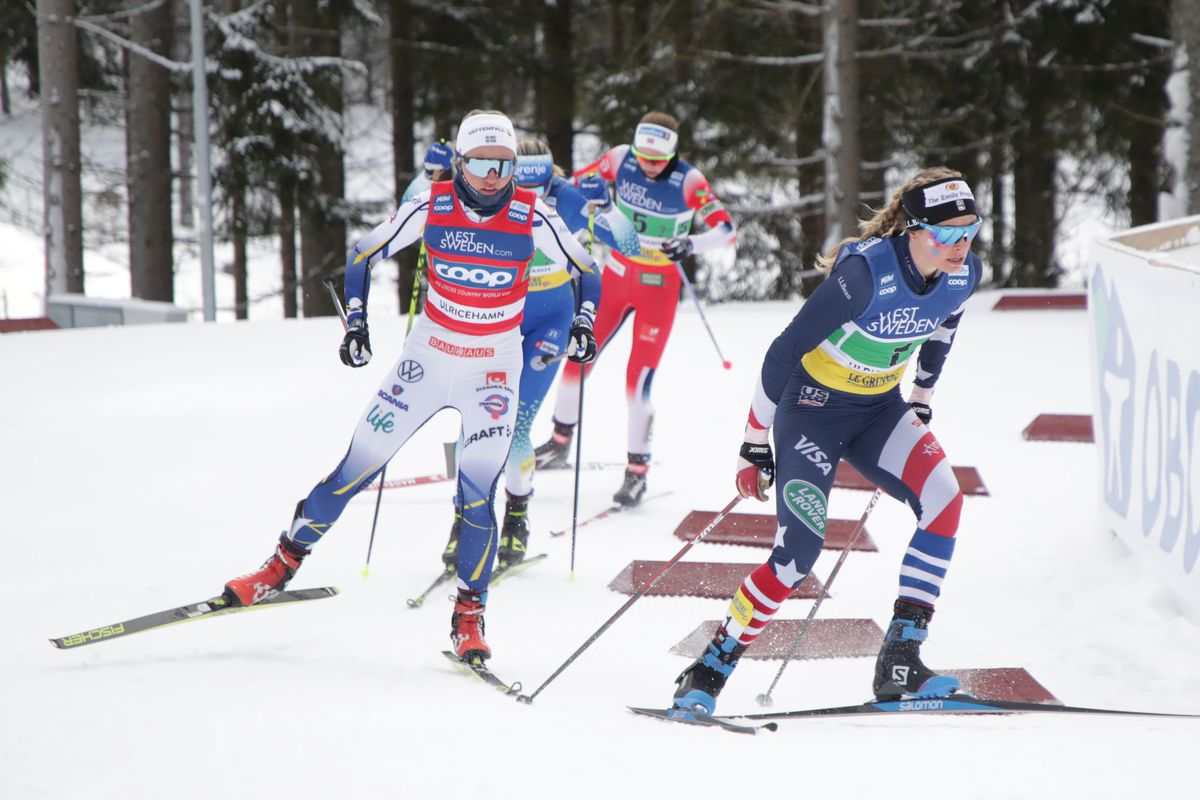 Jessie Diggins leads the pack during the finals of a World Cup team sprint race Sunday in Sweden. Diggins and partner Sadie Maubet Bjornsen lost a photo finish for the bronze medal. (Adam Ihse/TT via AP)

Jessie Diggins leads the pack during the finals of a World Cup team sprint race Sunday in Sweden. Diggins and partner Sadie Maubet Bjornsen lost a photo finish for the bronze medal. (Adam Ihse/TT via AP)

Sadie Maubet Bjornsen of Anchorage and Jessie Diggins of Afton, Minnesota, finished a heartbeat away from a podium finish Sunday in a World Cup team sprint race in Ulricehamn, Sweden.

Less than half a second separated the top four teams, with the Americans losing a photo-finish for the bronze medal.

“It was a wild and close team sprint out there today!” Bjornsen said by email.

A strong headwind made things tough on the leaders, which in many cases meant the Americans. Diggins and Bjornsen pushed the pace, but were never able to break up the tight lead pack.

“It was windy, no big climbs, and pretty much impossible to drop people or even tire them out because the draft was so big,” Diggins told U.S. Ski & Snowboard.

Diggins won Olympic gold in this event with now-retired Kikkan Randall of Anchorage in 2018, and she and Bjornsen make a formidable pair too.

Diggins is the World Cup overall leader, and although Bjornsen doesn’t boast a high ranking because she skipped the first several weeks of the season, she had registered top-15 results in her first three individual races coming into Sunday’s race.

“Each race back ... I feel a little less dusty,” Bjornsen said.

On Sunday, she said, “my mission was to stay in the front and out of trouble, and then attack on leg 3. On such a drafty, tactical course, Jessie and I had to get creative with our strengths. We would have loved to attempt to stretch people from the gun, but the wind was not in our favor.

“After finishing fourth by a photo finish, we both of course left wanting a bit more, but also felt like we did the best we could with our strengths. Even if I am 31 years old, I still feel like every race is a learning lesson, so there are no losses.”

In the men’s competition, Simi Hamilton and Kevin Bolger made it to the finals, where they finished sixth in the 10-team field. They were 3.11 seconds off Italy’s winning time of 18:29.0.

Anchorage’s Logan Hanneman and Idaho’s Peter Holmes finished eighth in their semifinal and failed to advance to the finals.