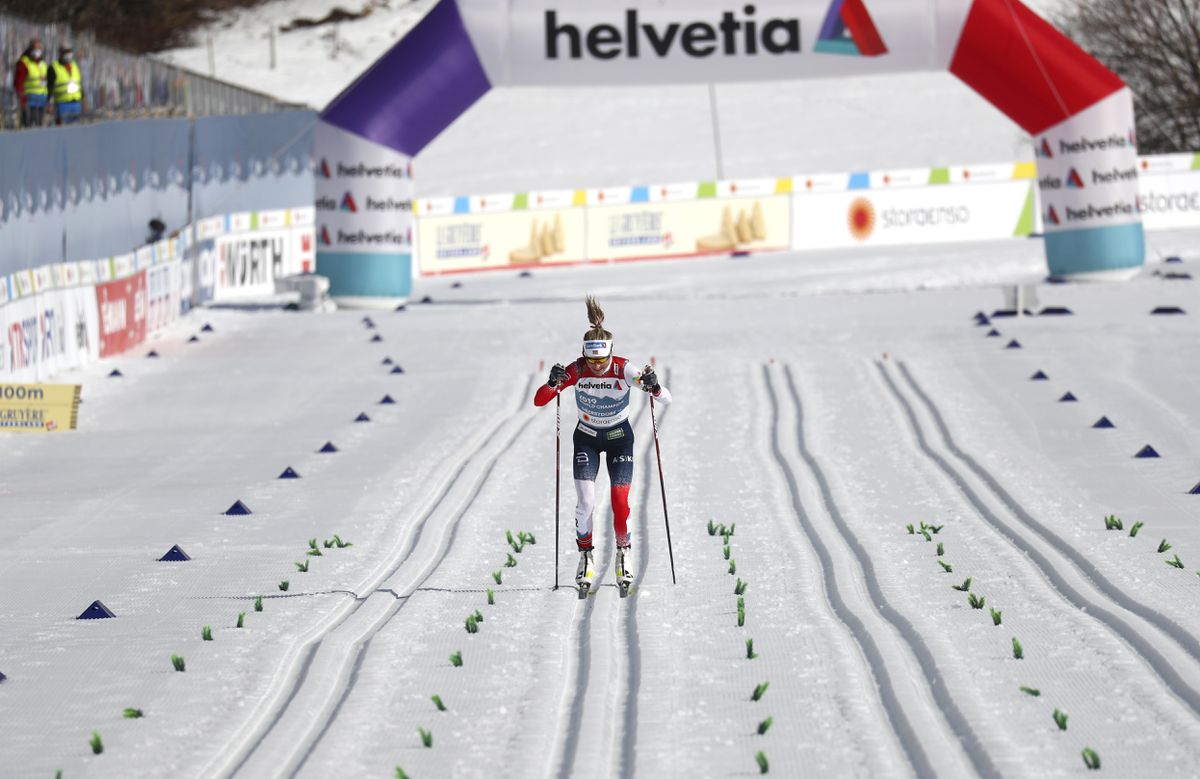 No other skier is in sight as Norway's Therese Johaug heads to victory in the women's 30K classic race Saturday at the World Championships. (Matthias Schrader / Associated Press)

No other skier is in sight as Norway's Therese Johaug heads to victory in the women's 30K classic race Saturday at the World Championships. (Matthias Schrader / Associated Press)

Anchorage’s Sadie Maubet Bjornsen ended her illustrious ski-racing career with both a marathon and a sprint Saturday at the Nordic World Championships in Oberstdorf, Germany.

Bjornsen, 33, claimed 15th place in the women’s 30-kilometer classic race. After skiing for nearly 90 minutes, her final race ended with a three-way sprint for the finish line. She was the last of the group to finish, four-tenths of a second out of 13th place.

“I had many kilometers of celebrating!” Bjornsen told U.S. Ski & Snowboard. “It was the hardest 30K I’ve ever done. Nothing like going out on that to remind you how hard this sport is.

“But I feel really stoked about my first 15K and that’s a good memory to leave — feeling like one of the strongest girls climbing that monster hill.”

Bjornsen skied with the lead pack for the first half of the race but lost some ground when she changed skis.

Norway’s Therese Johaug won by more than 2.5 minutes. Bjornsen was about 4.5 minutes off Johaug’s pace.

Anchorage’s Hailey Swirbul, a teammate of Bjornsen’s at Alaska Pacific University, was the second American finisher in 26th place. She was nearly seven minutes behind Johaug.

Swirbul said a fast start allowed her to briefly ski with Bjornsen in the mass-start race. She’s a 22-year-old World Championships rookie who said Bjornsen and other American skiers were an inspiration during her early years in the sport.

“I grew up with them on a poster on my wall that’s still there today, wearing yellow puffy jackets from like 2011,” Swirbul said. “They inspired me then and they inspire me now. Wherever they go next in life is so lucky to have them, and I’m lucky that we got to have them for this part of their lives. They’re pretty amazing.”