A skier born to race, Finnigan Donley rules the slopes at Alyeska, and his empire is about to expand 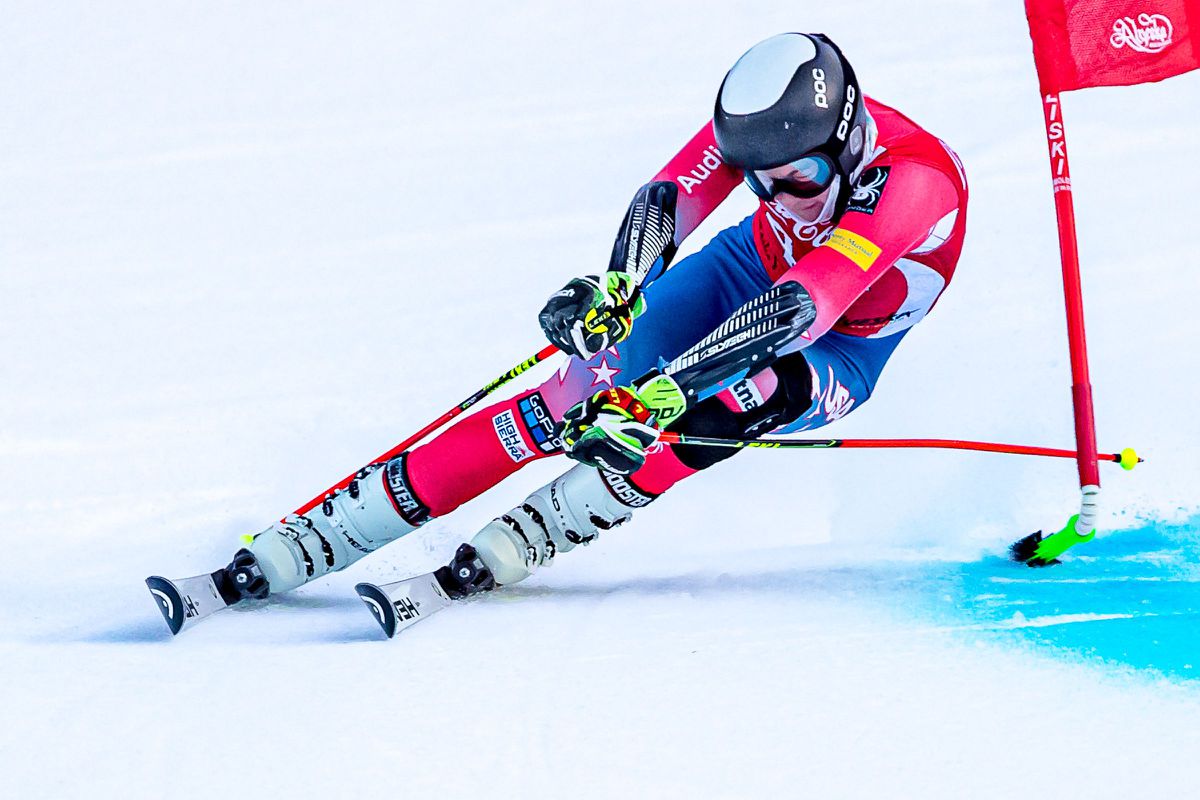 Finnigan Donley wears a brace on his injured left knee in his return to action January at the Coca-Cola Classic at Alyeska Resort. (Photo by Bob Eastaugh)

Finnigan Donley wears a brace on his injured left knee in his return to action January at the Coca-Cola Classic at Alyeska Resort. (Photo by Bob Eastaugh)

Sixteen-year-old Finnigan Donley was still in diapers when he learned to appreciate things that go fast.

He was 11 weeks old when his mom raced to second place at the 2005 Gold Nugget Triathlon, a race his mom lost only when future Olympic gold medalist Kikkan Randall chased her down in the final 300 yards.

Shannon Donley was already a four-time Gold Nugget champion by then, and she’d go on to win Alaska’s biggest triathlon four more times — when Finnigan was 1, 4, 5 and 6 years old, a pint-sized cheerleader with a taste for high-speed thrills. She was serious in her pursuit of fitness, and Finnigan frequently went along for the ride.

“I’d be pushing Finnigan in a baby buggy and we’d pass a jogger on the Coastal Trail and he’s clapping and yelling ‘Go! Go! Go!’ " Shannon recalled.

These days, Finnigan Donley is doing the winning, not the cheering. He’s a rising alpine ski star who this season made a bigger impact on the slopes than any young Alaskan in recent memory.

Two years earlier, he did the same in the Under-14 division at the Western Region Championships, winning the super-G, giant slalom and slalom (downhill racing starts at the U16 level).

Next season, Donley graduates to the U19 level, which will make him an FIS (International Ski Federation) skier no longer limited to competitions within his age group.

“It’s the next level,” he said. “I’m super excited. Once you’re in FIS, you can compare yourself to all the top-level skiers. I’m really excited for that and some great competition.”

Already Donley is routinely posting faster times than U19 skiers in races at Alyeska. He has been Alaska’s and the Western Region’s dominant age-group skier for a couple of years, and at this year’s region championships in Mammoth he won by some ridiculous margins. In a sport where races are usually decided by fractions of seconds, he won the slalom title by more than two seconds and the super-G title by nearly two seconds.

Chalk up some of the success to Donley’s boundless love of skiing, whether or not it comes with a ticking clock or on a course marked with gates.

“You can’t get him out of his boots,” UAA coach Sparky Anderson said, noting that in a couple of recent years, Donley logged more trips on an Alyeska chairlift than anyone else.

And it doesn’t have to be alpine skiing.

“He loves to jump, he loves to backcountry ski, powder ski, he loves to ski bumps,” his mom said. “Racing is absolutely a passion but he’ll ski bell to bell. He goes night skiing. He really thinks it’s fun. He works hard, he really does, but he loves it.”

The passion — for skiing, for competition — is in his blood.

Parents Kevin and Shannon Donley possess athletic resumes bursting with achievements, from Kevin’s victories over the years in the Crow Pass Crossing, the 25-kilometer Tour of Anchorage ski race and multiple footraces to Shannon’s record-tying eight Gold Nugget Triathlon championships. Both are also longtime alpine skiers who put Donley on Alyeska’s magic carpet when he was 2 or 3 years old.

Older sister Quincy, who just graduated from West High, captured a state cross-country individual ski championship in February and is headed to Harvard University, where she’ll be a member of the school’s NCAA ski team.

Grandfather Eberhard Brunner — better known to Donley as an “Opa” — ran an Anchorage sporting goods shop for many years and was Alyeska Resort’s first alpine ski coach, a job he started after moving to Alaska from Austria decades ago.

“He always has his wisdom about ski racing,” Donley said. “He always tells me to just race and look at the results afterwards. ‘Put down clean skiing that you’re happy with, and the results will come.’

“In Austria they didn’t have a groomer, so before every downhill they would have to boot-pack the whole course. Three runs up and down. Sounds brutal to me,” Donley said.

Donley said Brunner is his biggest fan, and an inspiration.

“He skied a lot this year during (the pandemic),” he said. “I got to ski with him a couple times and he’d come by and watch me train. It’s cool to see him up there. He’s 85. With how my knees feel, I can’t even imagine skiing 85 years down the road.”

Ah yes, the knees. Or at least the left one.

In November, Donley tore his MCL and patellar tendon when he crashed during giant slalom training at Copper Basin in Colorado.

“They always have these big nets on the side of the hill and I crashed through the net. It was set up close to the trees and I ended up hitting a tree with my leg,” he said. “I hit the tree so hard I didn’t feel my knee — my leg was hurting so bad.”

He spent 2.5 months off snow and returned to skiing at the end of January wearing a full brace. The brace came off after a month, replaced by kinesiology tape, “and now I’m finally working away from using anything,” he said.

Neither the injury nor the brace slowed him down — he won nearly all of his races.

“My MCL healed really well but the patellar tendon, it’s hard to get blood flow, so I’m doing a lot of quad work. It’s pretty time-consuming. You’re holding a squat for minutes on end,” he said.

Donley does some kind of physical therapy every day, displaying a work ethic that predates his injury. During last year’s offseason he attended training camps in the summer and fall and supplemented it with dryland training and mountain biking. Come winter, he was training with the Alyeska Ski Club five days a week while also working out in a gym and attending physical therapy.

“Donley’s commitment to the sport and work ethic are far beyond his years and are possible because of his love of skiing,” said Morgan Haymans, an Alyeska Ski Club coach.

Now, that commitment will take him to a ski school in the Lower 48.

Donley, who is wrapping up his sophomore year at West High, plans to spend the next two years at the Sun Valley Ski Education Foundation in Idaho, where he can walk to the ski slopes, have easier access to FIS races and take advantage of a flexible school schedule.

“I’m going down there this June for three weeks and do summer-school classes so (I) can drop a couple classes during the winter time,” he said.

It’s an exciting time, but also a bittersweet one, because the Alyeska Ski Club has been part of his life for so long. Donley is the second top skier to make the move to the Lower 48 — Daniel Ferucci joined the Steamboat Springs Winter Sports Club in Colorado this season and went on to win the slalom and giant slalom titles at the Rocky/Central Region U16 Championships.

For both boys, being closer to competitions and training opportunities was the deciding factor in their moves.

“I really love my team. The development with my coaches and being close to my family has been super awesome. But it’s always looming in the back of my head — it’s tough with the travel and (trying to balance) skiing and school. I’m glad I was able to experience all my U16 (years) and my sophomore and freshman years in Alaska.”