Promise between the pipes: UAA goalies a bright spot in a rebuilding season 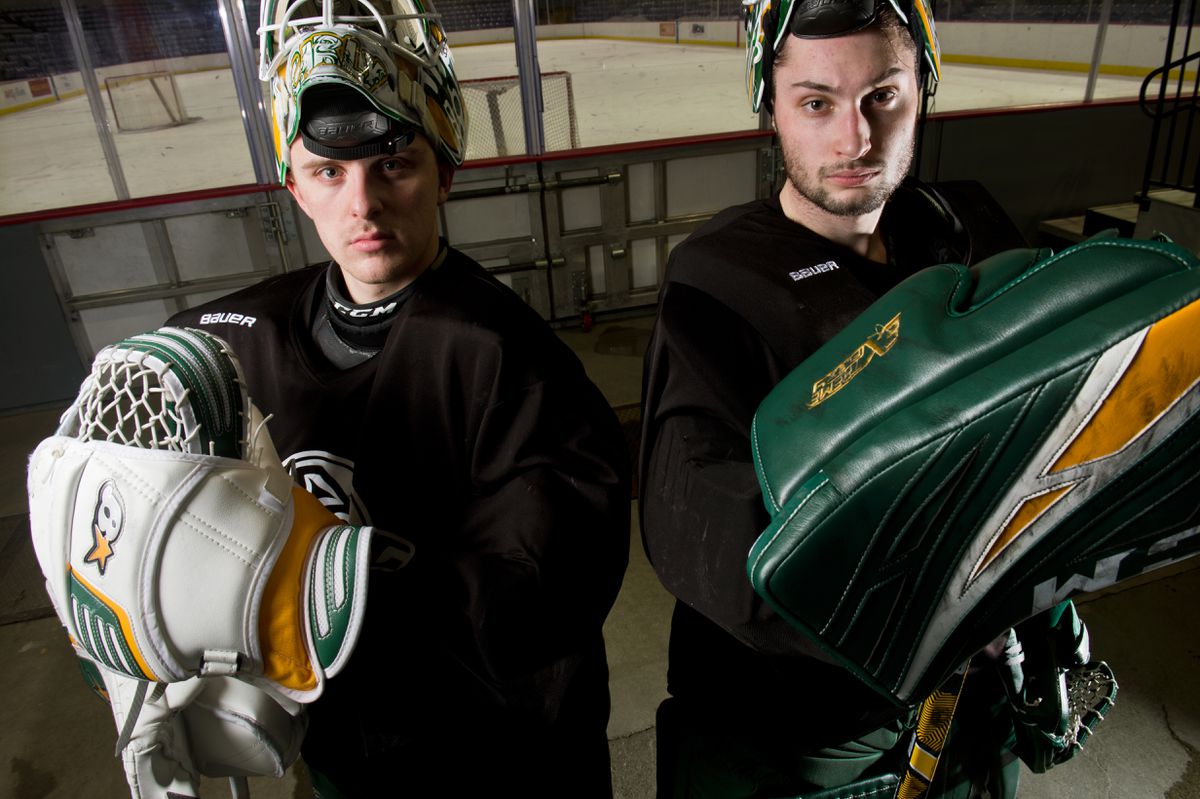 A cursory look at the UAA men’s hockey team will result in a predictable conclusion — the Seawolves are in a transition season and struggling to win games.

But beneath the surface of the team’s 2-22-2 record, there is reason for optimism, specifically between the pipes.

First-year coach Matt Curley has played each of his goalies for significant portions of the season, and all three have played well for stretches.

“There have been a lot of bright spots, it might not show up in the scoreboard or the record, but we’ve had a lot of positive results because of our goaltending,” Curley said.

The three goalies — Kris Carlson, Kristian Stead and Brody Claeys — are all sophomores. And all three have shown flashes when called upon.

Carlson has started half of the team’s 26 games, with a goals against average of 3.72. He notched a season-high 38 saves in a 2-1 road loss to Northern Michigan in a result that has been typical for UAA this season — low scoring and close until the very end.

Stead has logged the least amount of ice time but has played well in some big spots. Most notably, he was in goal during a tightly contested 4-3 loss to DI powerhouse North Dakota in late November. The Merritt, British Columbia native made 32 saves, giving up three of the goals during a 90-second flurry in the third period, including two while the Seawolves were shorthanded.

Stead also did not allow a goal in a 0-0 tie with Michigan Tech on Saturday. He stopped 32 shots during 70 minutes of play in a game UAA won in a shootout.

Claeys leads the team with a 2.33 goals against average and had his biggest game in a 2-1 Seawolves win over conference foe Bemidji State in mid-December.

“All three guys have been very good for us,” Curley said. “It gives us some momentum and belief knowing in the second half, any game we play we have a chance to be in it because of the guy between the pipes.”

The Seawolves had a stalwart in net last season, senior Olivier Mantha, who started 31 games and posted a respectable 3.43 goals against average. Curley announced early in the season he planned to give all three a chance to earn ice time. And while that strategy has clearly left all three wanting more playing time, Curley said it has also raised the level of competition and the level of play.

“I believe given the circumstances we’ve done a pretty good job of balancing that,” he said. “What it’s done, as hard as it’s been for those guys to want to play more, as they should as athletes and competitors, it’s given a chance for us to be competitive and elevated their game if and when they do get a chance to start.

"It’s made for some good competition in the net and given us a chance to compete on the ice. It’s tough in the college game. We only play so many games, a 34-game schedule, two games a weekend and there’s only one net and I got three guys that are all very capable.”

The Seawolves used Stead and Carlson in net during last weekend’s home series against Michigan Tech. Claeys is currently academically ineligible, but is finalizing his class scheduling and hopes of have the issue resolved in the near future, according to Curley.

Stead played sparingly early in the season, but has found his way onto the ice more in recent weeks.

“At the end of the day, it’s just healthy competition among the three of us so it’s just making us better,” he said.

The Seawolves have struggled to score and have been limited to one goal or less in 17 games this season.

“We’re rebuilding this year and to be that close in so many games, I think it’s a good sign for things to come,” Carlson said.

While the Seawolves are admittedly in rebuilding mode, they haven’t abandoned their goals for the rest of this season.

“We’re just looking to build on that and start burying some pucks and getting some wins in the second semester,” Stead said. “We want to make the playoffs ... and we definitely want to bring Gov. Cup back to Anchorage.”