Seawolves go 1-3 in a sprint race at Kincaid Park 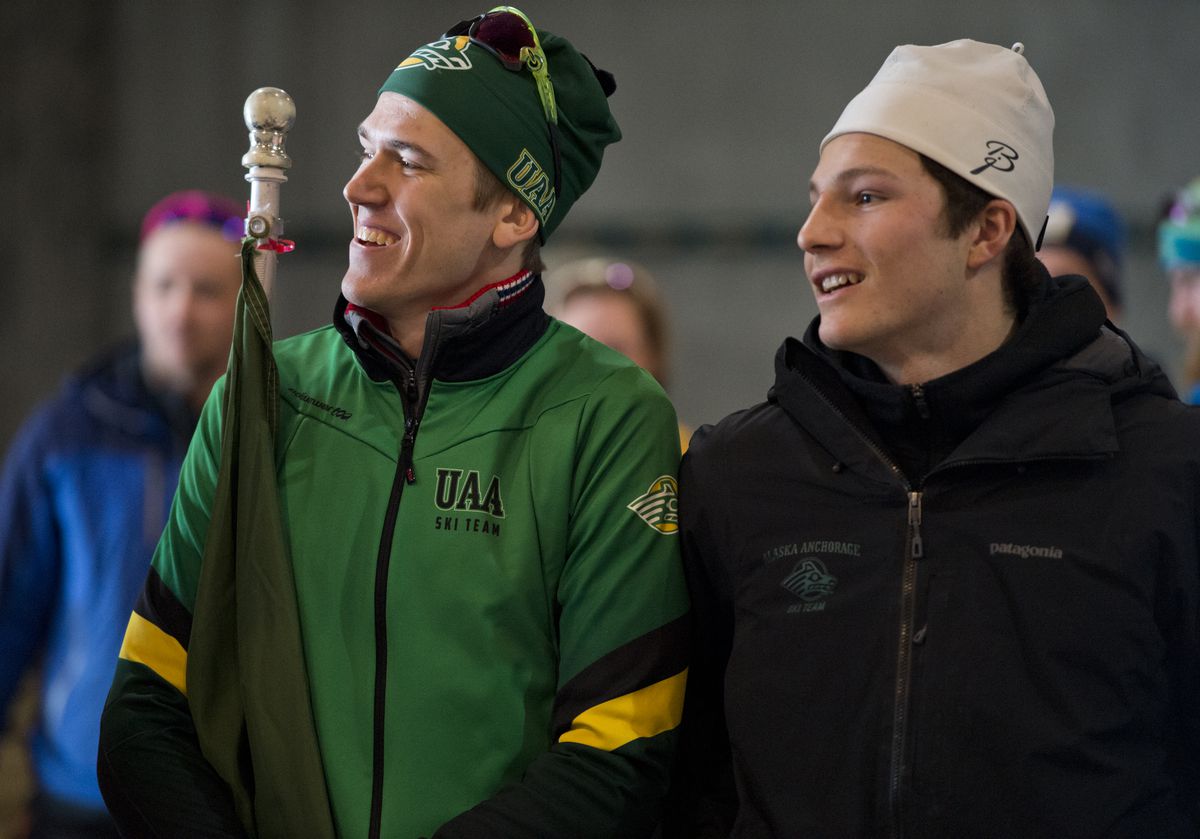 Sigurd Roenning, left, holds the Seawolves flag and stands with teammate JC Schoonmaker before the two took their places on the podium Monday at the UAA Invitational at Kincaid Park. (Marc Lester / ADN)

Sigurd Roenning, left, holds the Seawolves flag and stands with teammate JC Schoonmaker before the two took their places on the podium Monday at the UAA Invitational at Kincaid Park. (Marc Lester / ADN)

The home-trail advantage paid off for the Seawolves at Kincaid Park on Monday.

The UAA ski team put two men on the podium in the classic sprint race, the second of eight NCAA races being held this week in the Anchorage area.

Sigurd Roenning claimed his second victory of the season and J.C. Schoonmaker placed third to register his first podium finish of the season. Denver’s Eivind Kvaale grabbed second place in the closely contested final by nipping Schoonmaker in a photo finish.

Familiarity with the course made a difference, Roenning said in a post-race interview.

“Me and J.C. have been doing a lot of training together,” he said. “We had a sprint simulation two weeks ago and we figured out a lot of tactics and stuff, and we know how to do this final.

“I’m so proud of him. I think it’s really awesome to have two Seawolves in the finals and (on) the podium.”

The win was the second in eight races this season for Roenning, a freshman from Vikersund, Norway. He also owns a pair of second-place finishes and has placed no lower than 11th in any race.

It was the first top-10 finish for Schoonmaker, a freshman from Tahoe City, California, whose previous best was an 11th-place finish.

In the women’s race, Utah’s Julia Richter took first place, followed by Hedda Baangman of Colorado and Jasmi Joensuu of Denver. Joensuu was the winner of Sunday’s distance race at Kincaid.

Nordic skiers get Tuesday off before heading to Hatcher Pass for a Wednesday race. Sunday’s and Monday’s races were part of the UAA Invitational; Wednesday’s and Thursday’s cross-country races are part of the NCAA Western Region championships.

The first of four alpine races -- two in the UAA Invitational, two in the NCAA Western Region championships -- is Thursday at Alyeska.