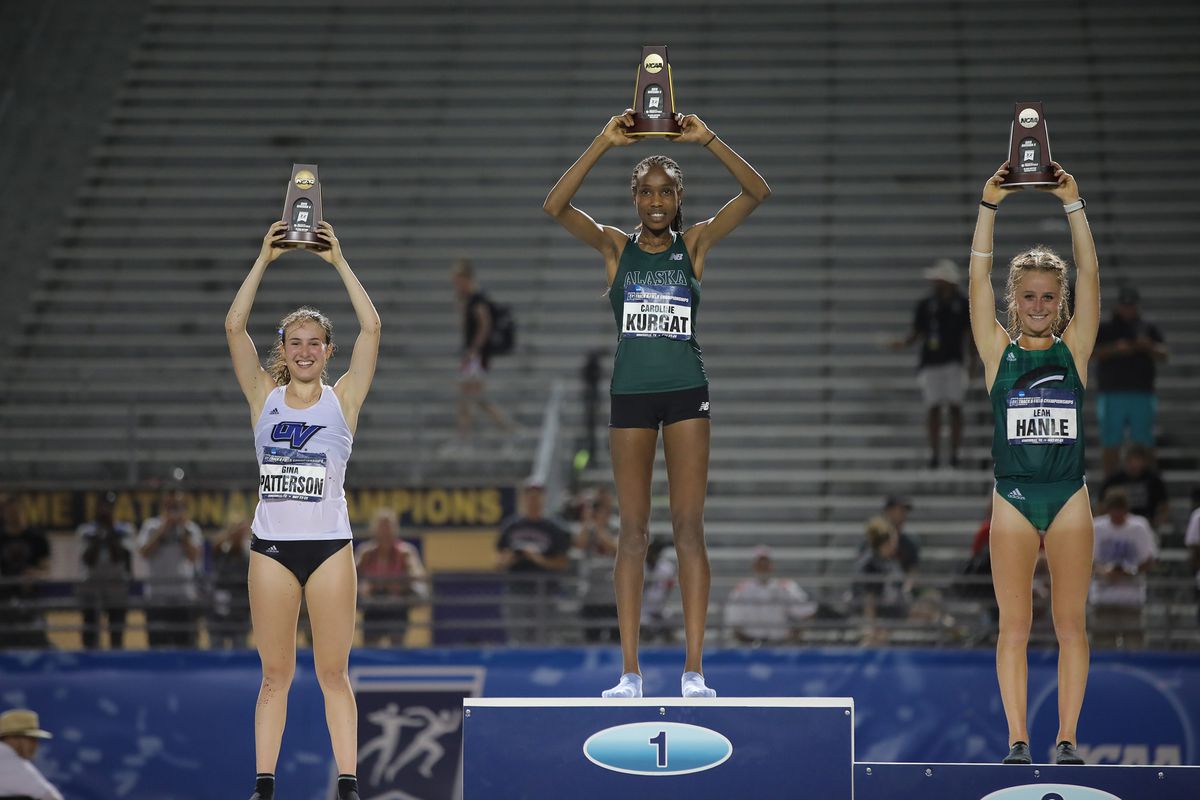 UAA's Caroline Kurgat stands atop the podium after winning the 5,000-meter run at the NCAA Division II championships in Kingsville, Texas, on Saturday, May 25, 2019.

UAA's Caroline Kurgat stands atop the podium after winning the 5,000-meter run at the NCAA Division II championships in Kingsville, Texas, on Saturday, May 25, 2019.

Just when you think you’ve got the measure of Caroline Kurgat’s greatness, you learn she is even more amazing than you thought.

Kurgat wrapped up the most decorated career in the history of UAA athletics Saturday by capturing her seventh national championship.

As is her custom, she used a fierce finish to finish off her pursuers, this time waiting until the final two laps to seize control of the women’s 5,000 meter race at the NCAA Division II track and field championships in Kingsville, Texas.

Kurgat, a senior from Eldoret, Kenya, owns a cumulative grade-point average of 3.47 in medical laboratory science and nursing. During her time at UAA she has collected nearly as many academic honors as victories on the track.

On Saturday, she led a strong performance by the Seawolves.

In a race that showcased three Alaska runners, Kirui and Kangogo finished third and fourth, respectively, in the men’s 3,000-meter steeplechase. Second place went to Jonah Theisen of Kenai, who runs for Black Hills State.

“Wesley not only returned from injury, but qualified and then finished third nationally is amazing,” Friess said in a press release from UAA.

Johnson, a Dimond High grad who picked up track after four years on the UAA volleyball team, placed seventh in the triple jump with a leap of 41 feet, 4.25 inches. The effort established a new Great Northwest Athletic Conference record.

McCormick, a senior from Soldotna, became a two-time All-American on her final day of competition as a Seawolf. She captured fourth place in the women’s 800 with a time of 2:09.71 and then ran a leg on UAA’s eighth-place 1,600-meter relay team. McCormick will leave UAA as an eight-time All-American.

“Very proud of how our team competed,” Friess said by text.

With her victory in the 5,000, Kurgat pulled off her second straight sweep of the 5,000 and 10,000 titles at the national championships. Only two other women have swept those races in consecutive years — Christie Allen of Pittsburg State (1992-93) and Kasia Arient of Lewis University (1997-98).

Kurgat’s final race for the Seawolves was an entertaining one. She was part of a lead pack so big it filled four lanes of the track. At the 3,800-meter mark, Kurgat led a group of 12 runners who were separated by 2.2 seconds.

With two laps to go, she had less company but things were still close — she led Eilish Flanagan of Adams State by seven-tenths of a second.

With her victory in Saturday’s 5,000-meter run, Caroline Kurgat wrapped up her running career at UAA as a seven-time national champion. Four of her championships have come this year – two in outdoor track and two in indoor track.

Correction: The list of Kurgat’s national titles has been updated with the correct times of her 2018 championships.