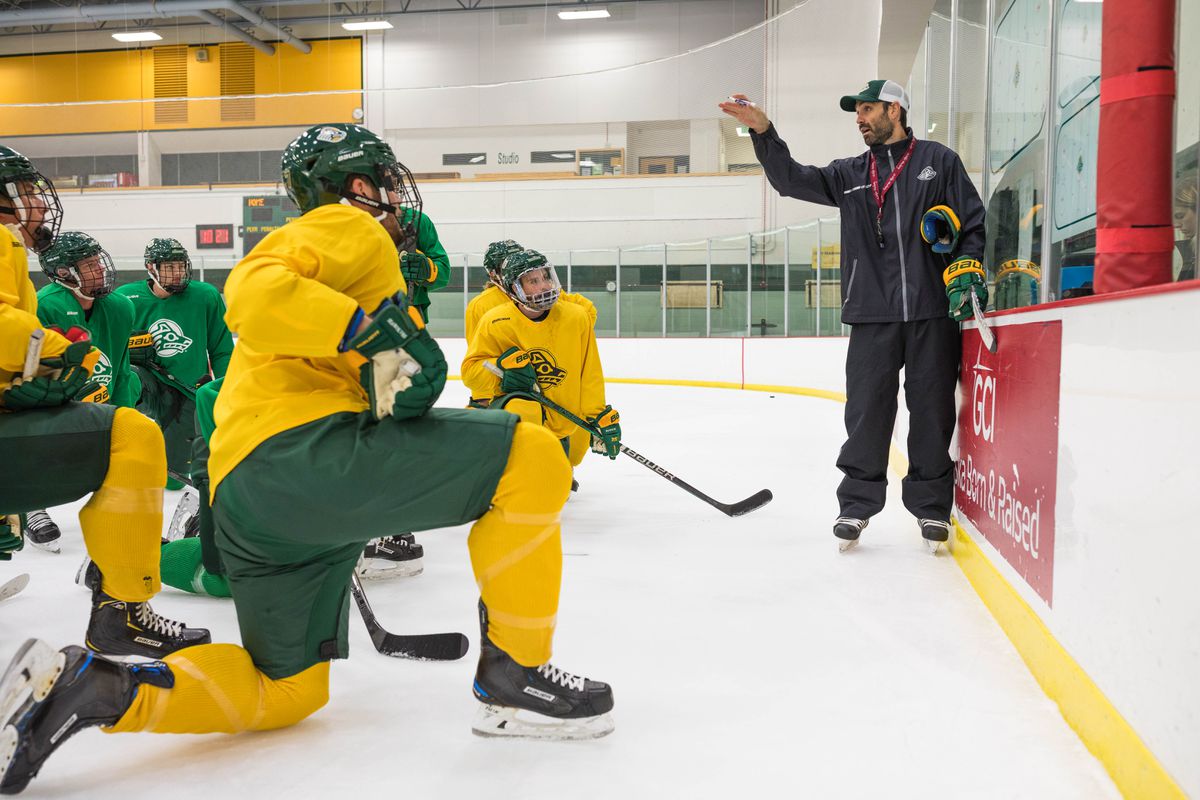 Matt Curley, shown here running a UAA practice last season, is in New York this week to choose players for the USA Hockey team he will coach at an international tournament next month in Germany. (Loren Holmes / ADN)

Matt Curley, shown here running a UAA practice last season, is in New York this week to choose players for the USA Hockey team he will coach at an international tournament next month in Germany. (Loren Holmes / ADN)

Hockey coach Matt Curley is swapping UAA for USA for the next couple of weeks.

Curley, who is entering his second season as the Seawolves’ head coach, was named head coach of the U.S. Hockey team that will play in the Under-17 Five Nations Tournament next month in Germany.

“Now I’m getting an opportunity to be a head coach of one of our national teams, and there’s no bigger honor,” Curley said Wednesday between games at a selection camp in Buffalo, New York.

More than 150 players born in 2003 are at the week-long camp, including some Alaskans, Curley said. From that group, 20 players will be named to the Under-17 team that will play in Germany.

“After Saturday we’ll all go our separate ways for the next couple of weeks,” Curley said. “We’ll re-converge in early August to do a day of practice, and then we’re on the plane and heading to Germany.”

The five-team tournament runs Aug. 13-17 in Fussen, Germany. Besides the United States, teams from Germany, Slovakia, Switzerland and the Czech Republic will compete.

Curley was an assistant coach at last year’s Under-17 Five Nations team, which went 2-2 to finish in third place. Since 2007, Team USA has won seven gold medals at the tournament, most recently in 2017.

Curley said he’ll be back in Anchorage a few weeks before classes begin at UAA.

Curley’s trip to New York for the U.S. selection camp comes during a critical time for the University of Alaska. Gov. Mike Dunleavy’s budget vetoes slashed $130 million from the university budget, and on Wednesday a vote by the Alaska Legislature failed to override the vetoes.

“Unfortunately there’s not a whole lot we can do — we are a very, very small cog in this political machine that’s rolling along,” Curley said. “We’re like everybody else, waiting to see where the dust settles. We’re all committed to being Seawolves for the upcoming season.

“… I’m not going to let (the uncertainty) derail my attention from my guys in Anchorage and the guys coming in, nor will it distract from the pride and opportunity with this (USA Hockey) task at hand.”