Semper Gumby: With 12 games scheduled in four days at UAA, flexibility is key 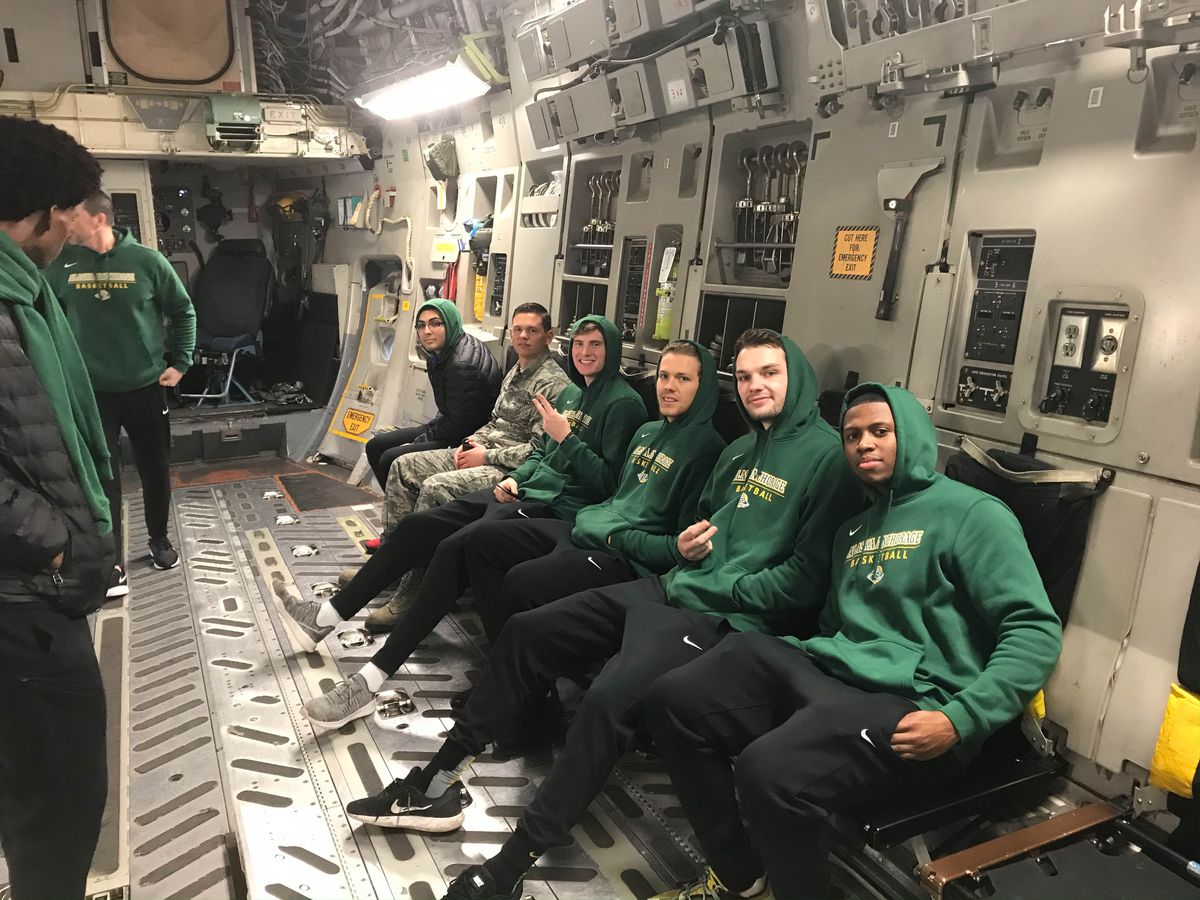 It’s appropriate that one of the 11 college teams visiting Anchorage this week is the Coast Guard Academy, because in order to find a place for everyone to practice and play UAA is living up to an unofficial Coast Guard motto: Semper Gumby.

It means “always flexible,” a nod to the always-prepared mindset of the Coast Guard — and to the green toy you can bend into multiple positions.

This week for the UAA athletic department and the many teams it is hosting, flexibility is key.

The school will host 12 events in a four-day period at the Alaska Airlines Center, two of them volleyball matches and the rest of them basketball games. In order for it all to happen, UAA needed to do some creative scheduling.

“So many people need to be thanked,” UAA men’s basketball coach Rusty Osborne said this week while talking about the busy week.

Driving everything is Friday’s Armed Forces Classic, which will bring Division I basketball back to Anchorage for one night only.

An event organized and televised by ESPN, the Armed Forces Classic began in 2012 and is held annually at a U.S. military base.

The inaugural game between UConn and Michigan State was played inside an airplane hangar at Ramstein Air Force Base in Germany. The 2015 game between Gonzaga and Pittsburgh was held on a temporary court on a military base in Okinawa, Japan, but was called off at halftime because the court was too slippery from the humidity.

This time the event is coming to a real court in a place with a long-standing relationship to the military. And because the Alaska Airlines Center has a home team, the Armed Forces Classic will be a doubleheader instead of the usual single game.

At 5:30 p.m. Friday, 16th-ranked Baylor will face the University of Washington in a Division I game that will be televised live by ESPN.

At 8 p.m., the home team — the Division II Seawolves — will take on the Division III Coast Guard Academy in a game that will be televised live on ESPNU.

The Baylor-Washington game will be the first Division I hoops game held in Anchorage since the Great Alaska Shootout wrapped up a 40-year run in November 2017.

Greg Myford, UAA’s second-year athletic director, said he was hoping to find a way to bring Division I basketball back when he called ESPN shortly after arriving in Anchorage a little more than a year ago.

“It amounted to a combination of good timing, and obviously a good facility and willing partners in ESPN and JBER,” Myford said this week. “I placed a call to ESPN about the possibility of (Division I teams) returning here … and that conversation was met with the response that with the Armed Forces Classic, they had it on their radar to get back to Alaska.”

Joint Base Elmendorf-Richardson is the official host of the event, and Wednesday it welcomed players to the base.

The arena seats about 5,000 for basketball, and JBER is getting 3,000 tickets. UAA will get a share of the revenue from the sale of the remaining tickets, Myford said.

“We’re down to a few hundred tickets,” he said.

The event coincides with Veteran’s Day weekend, and although troops from JBER may make their presence known by filling the bleachers, the Coast Guard Academy will represent on the court.

As a Division III team with no athletic scholarships, the Coast Guard will be the underdogs. But Osborne said the Seawolves are honored to face the Bears.

“With 6,400 miles of coastline (in Alaska), we’ve got more coastline than any other area in the northern hemisphere, and so we know some of these guys are going to be protecting us at some point,” he said. “So it’s a tremendous honor.”

Getting a chance to play on national TV — something the Seawolves haven’t done since the Shootout ended — “is the icing on the cake,” Osborne said.

“We’re ready to show everyone what we’ve been doing,” senior guard Jack Macdonald said. “Being on ESPN is a big honor. It gives guys that little extra bit of incentive to go that extra mile.”

It’s because of ESPN that the UAA volleyball team had to shift its Thursday match against Western Oregon to the auxiliary gym at the Alaska Airlines Center. The main gym is unavailable that night because workers will be there changing the floor so it shows logos for the Armed Forces Classic and ESPN.

And it’s because of the Armed Forces Classic that men’s basketball teams from UAF, Chaminade and Hawaii Pacific are in town for the two-day Alaska-Hawaii Challenge, an annual tournament that rotates between UAA, UAF and two Hawaii schools. This year’s tournament was supposed to be in Hawaii, Osborne said, but the participating teams agreed to alter plans in order to accommodate UAA’s participation in the ESPN event.

After Friday’s Armed Forces Classic games are done, the gym floor will revert back to its usual state in time for the volleyball team to play in the main gym on Saturday afternoon. Four basketball games are on tap Saturday and Sunday, with the UAA men and the UAA women playing both days.