Seawolves hold an ace heading into the postseason: Strong serving 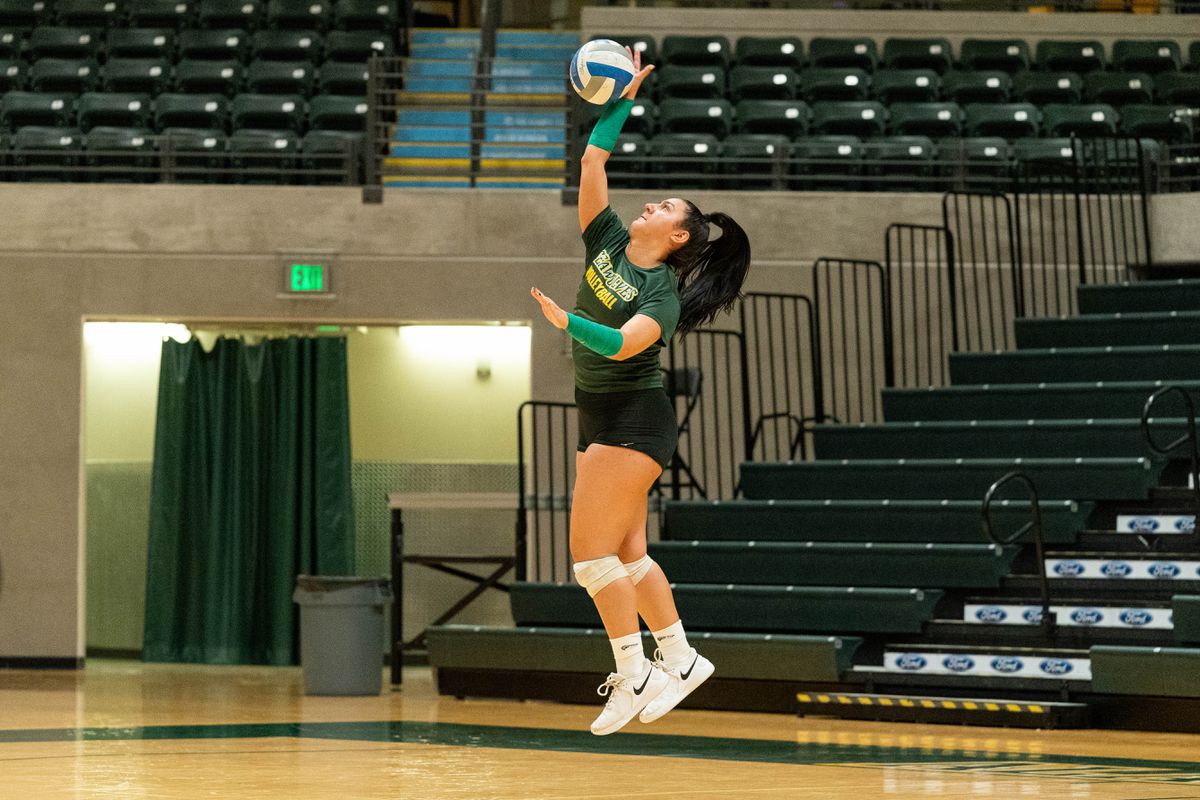 Basketball starts with a jump ball, hockey with a faceoff and football with a kickoff. Each of those things can lead to points, but seldom are they offensive weapons on their own.

Volleyball starts with a serve, and if you have a skilled server, your team can score a point before anyone else ever touches the ball.

An ace is worth a point to the team that serves it, meaning it’s as good as a kill, a block or a ball that gets blasted out of bounds or into the net by the opponent. Sometimes an ace sparks a scoring spree and shifts the momentum of a game. Almost always it sparks a team-wide celebration.

The UAA volleyball team has served up a storm on its way to a 22-6 record and a spot in the NCAA Division II tournament. The Seawolves rank eighth in the nation for aces per set and they have two players, senior Vanessa Hayes and freshman Maggie Schlueter, who rank in the top 25 nationally heading into the West Region championships that begin Thursday in San Bernardino, California.

With 237 aces in 28 matches (an average of 2.17 per set), the Seawolves are the best-serving team in the eight-team tournament and are one of the best-serving teams in UAA history. Hayes and Schlueter have served 52 aces apiece and share the No. 24 national ranking with identical averages of .48 aces per set.

UAA practices begin with serving, an indication of how much value coach Chris Green places on the skill.

“We warm up serving, so I think that tells the players that we really focus on that, that we think that’s a very important part of the game because we do that first,” Green said last week. “If we can keep the other team from passing to their setter, we’re going to have success.”

Almost every UAA practice includes a serving-and-passing drill that at first glance seems a bit chaotic. The court is divided into four sections, and in each section there are three players — one who serves, one who receives the serve and a third who keeps track of what happens.

The third player stands near the net and decides what is a perfect pass and what is an ace. Points are tallied on a whiteboard and updated after every practice.

“That drill is effective because you are the only passer and so every ball has to be yours,” Hayes said. “It really focuses on just your skills. And as a server it’s helpful because you have to serve in just that designated area, and so you have to be consistent with the location of your serve.”

Green likes the drill because it gives the coaches a chance to measure a player’s consistency.

“You can see each of (them) getting rep after rep after rep,” he said, “so we can make some determinations on who the best passers are watching that drill.” Same goes for servers, he said.

With four groups of servers and passers, the drill can be a little hectic, sophomore Eve Stephens said. But because players are trying to score points and move their name up the list on the whiteboard, they are able to focus on what they need to do.

“It’s a competition all around — serving and passing,” Stephens said. “So you have to be on your game.”

Players don’t get to pick who they are paired with, so everyone at some point has to face a tough server like Hayes or Schlueter or a top passer like Anjoilyn Vreeland or Talia Leauanae.

For the last month or so, Hayes, Stephens and sophomore setter Ellen Floyd have held down the top three spots on the whiteboard. Not coincidentally, those three were all named to the all-Great Northwest Athletic Conference team. On Wednesday, Stephens and Floyd added all-West Region honors to their list of achievements.

The Seawolves serve aggressively rather than conservatively. They aren’t just putting the ball in play, they’re trying to disrupt the other team by turning the serve into an attack and by aiming for specific players or parts of the court.

Aggressive serving can lead to serving errors — balls that go out of bounds or don’t clear the net — and those are easy points for the opponent. A 1-to-1 ratio of aces-to-errors is the goal, Green said.

The Seawolves aren’t there right now. They have 237 aces against 268 errors, but for perspective, consider that opponents have served 164 aces and made 226 errors in matches against UAA this season.

The UAA record for the most aces in a single season is 259, set by the 1982 team (fun fact: that team included Sarah (Sullivan) Afoa, the mom of UAA assistant basketball coaches Shaina Afoa and Sierra Afoa; and Kim Killion, who occasionally referees UAA matches).

The individual school record belongs to Sandra Kirtley, who served 57 aces in the 1995 season. Hayes and Schlueter are five aces shy of that record heading into Thursday’s tournament match against UC San Diego.

This week in UAA sports

(For Thursday’s basketball doubleheader, tickets are $5 (half off) for fans who bring at least one nonperishable food item for the Food Bank of Alaska.)