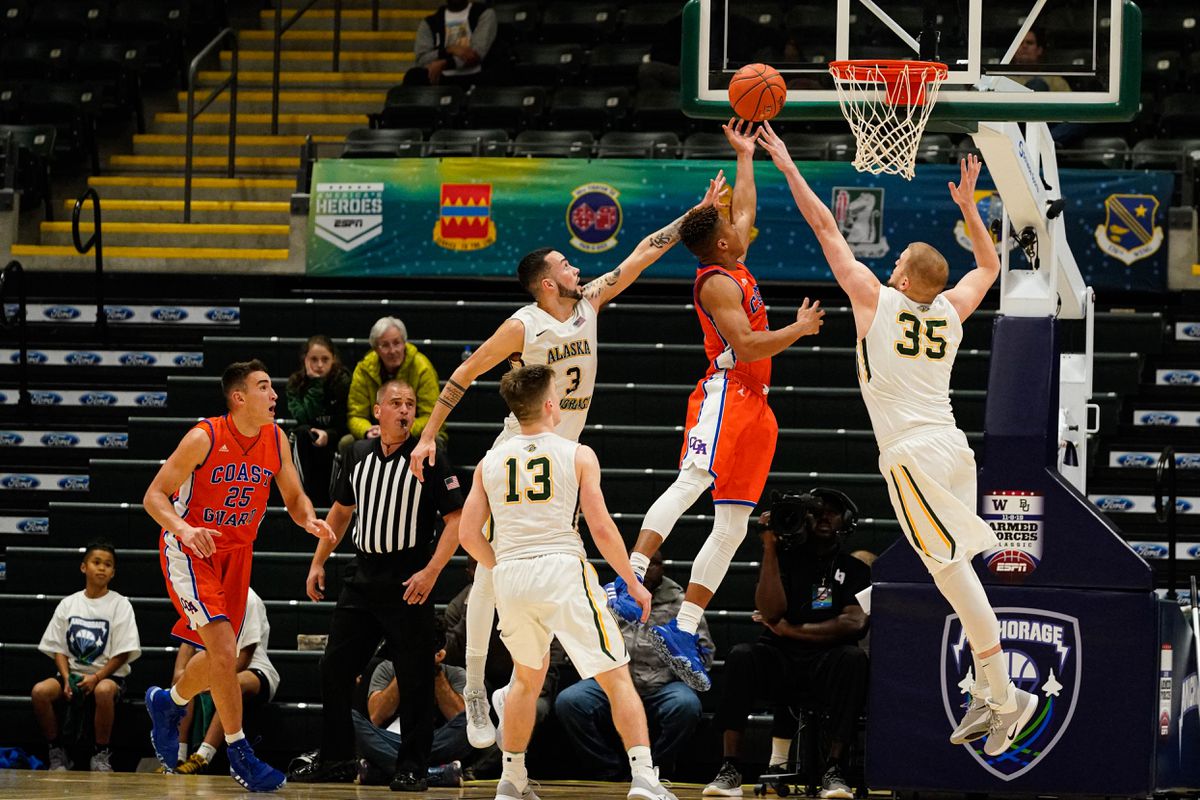 Oggie Pantovic (35) tries to block a shot for UAA in a game earlier this year at the Alaska Airlines Center. (Loren Holmes / ADN)

Oggie Pantovic (35) tries to block a shot for UAA in a game earlier this year at the Alaska Airlines Center. (Loren Holmes / ADN)

The UAA men’s basketball team had to leave Oggie Pantovic, its leading scorer and rebounder, on the U.S. side of the border for a game against Simon Fraser University after the junior forward from Serbia was denied entry to Canada.

The trip to British Columbia to play Simon Fraser is an annual one for the Seawolves. UAA coach Rusty Osborne said the team arrived at the Washington-Canada border earlier than usual because he wanted to make sure there would be time for border workers to check the paperwork for the team’s two foreign players — Pantovic, who is new this season, and Jack Macdonald, a senior from Australia who has made the trip multiple times.

“We have had numerous foreign athletes and they have all been able to get in with their Student Visa and Passport,” Osborne said Friday by text. “We did anticipate that (Pantovic) may be looked at more thoroughly than our Australians, so we left earlier to be prepared but did not believe he would be denied given our history of crossing.

“… Unfortunately, because of relations between Canada and Serbia, the Canadian Government requires a special Visa issued by the Serbia government.”

By the time it was clear Pantovic couldn’t enter Canada, tipoff in Burnaby, British Columbia, was about two-and-a-half hours away.

Osborne decided to send the rest of the team and coaching staff across the border while he took Pantovic back to the team’s hotel in Bellingham, Washington, about a 30-minute drive from the American side of the border in Blaine, Washington.

“(I) got him food and into his hotel room where he watched the game online and he remained until we returned,” Osborne said.

Then Osborne drove back to the border and on to Burnaby, a trip of about 70 minutes. By the time he got to Simon Fraser, there were 20 minutes left before tipoff.

Without Pantovic, who averages 13.1 points and 7 rebounds per game, the Seawolves suffered a 92-81 loss and took a 39-22 pounding on the boards in the Great Northwest Athletic Conference game. He’ll rejoin the Seawolves for Saturday’s game against Western Washington in Bellingham.

The GNAC is the only NCAA conference with a member school from Canada, and GNAC communications director Blake Timm said this isn’t the first time an athlete hasn’t been able to cross the border.

“This situation has happened occasionally (thankfully, very infrequently) with other student-athletes over the years,” Timm said by email. “This typically happens when someone does not have the proper documentation.”

Lesson learned, Osborne said. He said UAA will make sure to research the visa requirements for all of its foreign players before future trips to Simon Fraser.