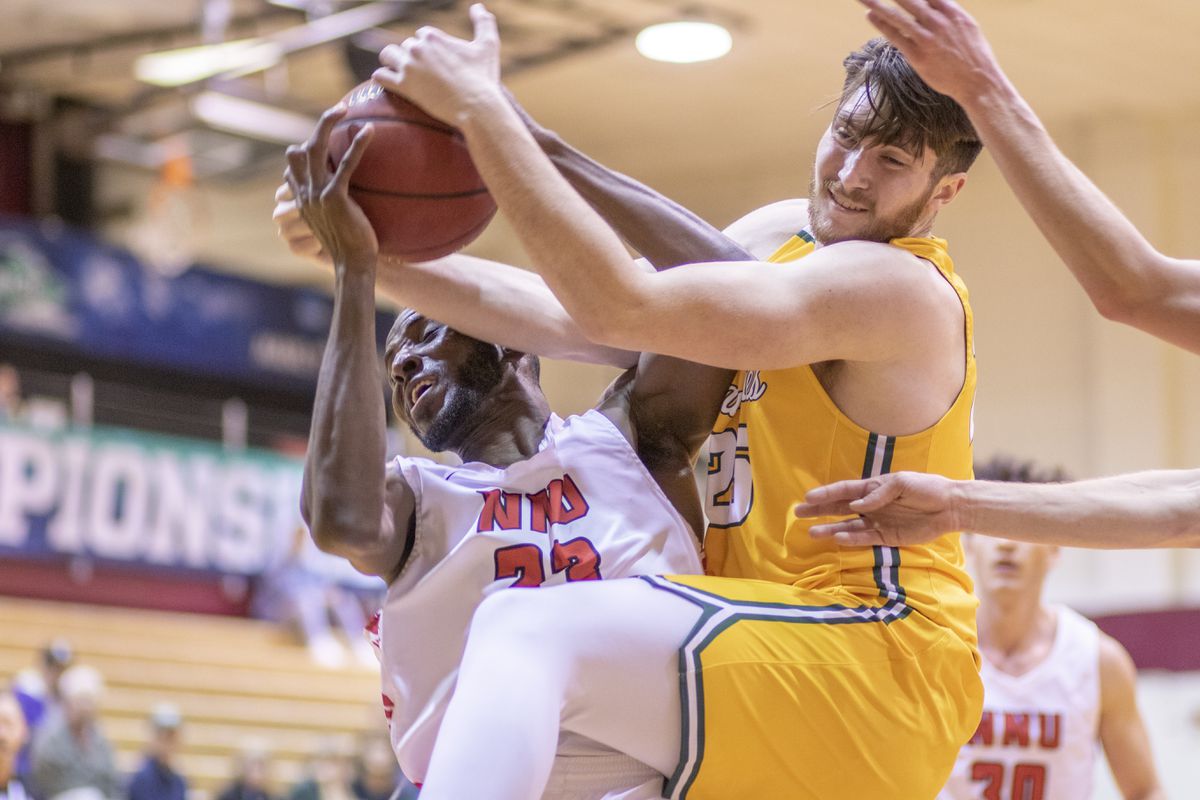 UAA junior David Riley looks to get possession of the ball during Thursday's 85-76 win over Northwest Nazarene. (Photo by Matt Brashears)

UAA junior David Riley looks to get possession of the ball during Thursday's 85-76 win over Northwest Nazarene. (Photo by Matt Brashears)

A player who hadn’t scored in double figures for nearly two months came through with a team-high 17 points Thursday to help the UAA men’s basketball team triumph despite a poor start at the Great Northwest Athletic Conference tournament in Seattle.

Senior forward Tyler Brimhall came off the bench to provide points and energy to a Seawolves team that rallied for an 85-76 quarterfinal victory over Northwest Nazarene.

The win puts UAA in Friday’s semifinals, where it faces regular-season champion and tournament host Seattle Pacific at 1:15 p.m. AST. The Falcons are the 25th-ranked team in Division II.

Brimhall scored the basket that tied the game 69-69 with a little less than four minutes remaining and provided a block, a rebound, an assist and two free throws as the Seawolves outscored the Nighthawks 16-7 the rest of the way.

The victory came despite foul trouble that limited junior forward Oggie Pantovic, UAA’s leading scorer and rebounder, to 20 minutes of playing time, and despite more turnovers and fewer 3-pointers than usual.

“Oggie didn’t have a big game because of foul trouble; we turned it over way too much — we average 11 turnovers and turned it over 14 times; we didn’t shoot the ball well — we were 8 from 25 from the 3; and we got outrebounded,” UAA coach Rusty Osborne said at a postgame press conference.

“So, we turned it over, we didn’t rebound, we didn’t shoot it well, but we were resilient and we got big stops down at the end. We were able to keep it close as we fought through all that trouble.”

At the heart of UAA’s final, game-changing push was a 12-0 run in a three-minute span. That stretch lifted the Seawolves to an 81-70 lead with less than a minute to go.

Tyrus Hosley buried back-to-back jumpers to start the run, giving UAA a 73-70 lead. The biggest shot came from sophomore Tobin Karlberg, who was 0-for-5 from 3-point range until he sank a shot from well behind the arc to make it 77-70 with 96 seconds left.

From there, the Seawolves went 8 of 8 from the free throw line to walk away with the win.

UAA (19-13 overall) got all of its points from seven players, and all of them had nine or more points.

Brimhall, whose last double-figure game came on Jan. 9 when he dropped 15 points on Western Washington, hit 7 of 10 shots to go with four rebounds, two assists and two blocks in 24 minutes.

In Thursday’s other tournament game, UAF rode a 42-point game from Shadeed Shabazz to a 91-88 upset of third-seeded Western Oregon.

Shabazz, who Wednesday was named the GNAC Player of the Year, had 24 points in the first half en route to a single-game GNAC tournament scoring record.

Shabazz fouled out with the score tied 77-77 but the Nanooks survived without him. In the final minute, Spencer Sweet sank a 3-pointer and Koby Huerta hit a jumper to give UAF the win.

The Nanooks will face second-seeded Western Washington on Friday.