Still stinging from proposed cuts, UAA athletes and coaches will make their case to regents on Monday 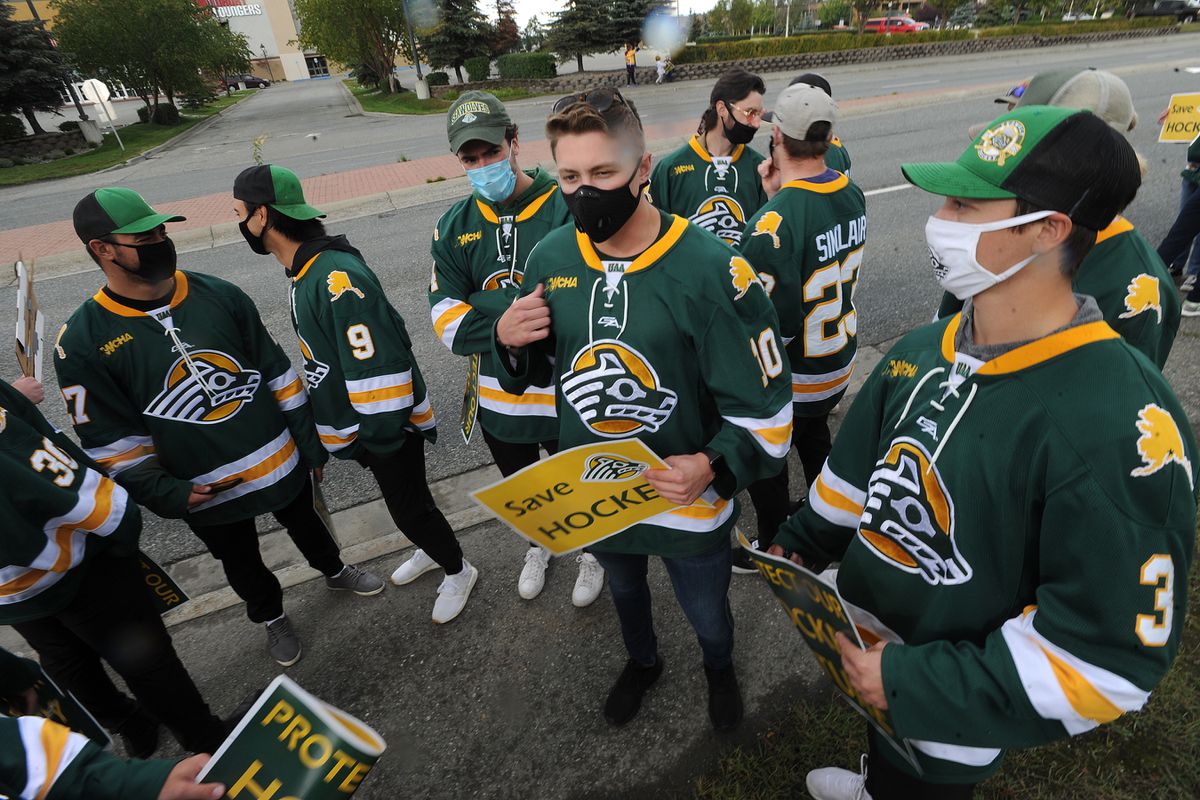 Tanner Schachle feels like he’s been fired from a job — a dream job, and one he was performing well in. He’s confused, dejected and mad.

Schachle, 23, is a hockey player from Wasilla and one of 55 student-athletes at UAA who recently learned their school wants to get rid of their teams to help meet budget cuts amid a steep decline in state funding.

The men’s hockey team, the women’s gymnastics team and the men’s and women’s ski teams are all headed toward elimination, a move that would save UAA $2.5 million a year and leave it with nine intercollegiate athletic teams, one below the NCAA’s minimum requirement.

Coaches and athletes are fighting the proposal, and Monday they get a chance to plead their case during a two-hour call-in session with the University of Alaska Board of Regents from 4-6 p.m. Less than two weeks later, on Sept. 10, regents are expected to vote on the plan.

“We were caught completely off guard,” Schachle said last week. “I haven’t had much time to feel grief because I’m still pretty upset with the way things have shaken out.”

“We’re upset, we’re frustrated,” he said. “We wanted answers. When you get fired from something you usually know why, and we don’t know why.”

He said the athletes understand the statewide university system faces a huge budget crisis. The University of Alaska system is in the process of cutting $70 million in a three-year period under a deal with Gov. Mike Dunleavy, who originally wanted a single-year cut of $130 million.

What the athletes don’t understand, Schachle said, is why entire programs are being sacrificed.

“Why aren’t we looking to maybe make some cuts where maybe (employees) would take a little hit, like 1 or 2%, instead of 55 students, seven coaches and two staff members being cut 100%?” Schachle said. “That’s what’s really frustrating. Those are the questions we would like to have answered.”

The head coaches of the programs are scrambling for solutions that might preserve programs that have a deep history at the school and deep connections in Anchorage.

Most kids who play organized hockey in Anchorage has been coached by a former Seawolf at one level or another. Young alpine racers benefit when UAA skiers compete in FIS races at Mount Alyeska because it gives the a chance to improve their national rankings, and young nordic skiers get to mix it up with Seawolves who go on compete at the World Cup and Olympic levels. UAA gymnasts are role models for little girls pursuing the sport and usually put in more volunteer hours than any other UAA sport.

“These are the people you want to attract and keep,” said gymnastics coach Marie-Sophie Boggasch, a stellar example of someone who came to Alaska as a student-athlete and decided to stay.

Boggasch was a teenager when she came to UAA from Germany. She earned an aviation degree and has worked as a pilot for Regal Air. When she returned to UAA to get a master’s degree — for which she produced a education program for 135 carriers in her quest to help keep Alaska’s skies safe — she became an assistant coach for the gymnastics team.

Earlier this summer, she was promoted to interim head coach. Five weeks later, the plan to cut gymnastics was announced.

“I have a lot of vision and ideas,” she said. “I’m very determined to show the type of individual UAA produces.”

Among her ideas are reductions to the gymnastics program that would save money.

“I will work with a smaller staff,” Boggasch said. “I will eliminate my performance bonuses. I can reduce our travel and scholarship budgets.”

The school could raise revenue by renting the gymnastics facility at the Alaska Airlines Center to youth clubs, she said, and a drop from the NCAA Division I level to the Division II level would reduce the number of required meets each season.

Ski coach Sparky Anderson has already eliminated some travel — the alpine team no longer goes to Colorado for preseason training, for example — and said traveling with a smaller team and going to fewer meets are also possibilities.

“We would just have to have a smaller team, but that’s better than not having a program,” he said.

Anderson said he wants to show the Board of Regents that athletics “is an engine for the university, not just an expense.” For every skier on scholarship, he said, there is another who is a walk-on, meaning they’re paying tuition and hoping to earn a spot on the team.

Anderson also plans to present the regents with a plan that would save skiing even if the hockey and gymnastics teams are killed.

If the university cuts hockey, the school would fall below the NCAA’s minimum requirement of 10 sports, which includes a minimum of two men’s team sports and two women’s team sports. Without hockey, UAA’s only men’s team sport would be basketball, meaning it would have to replace hockey with another sport, with soccer, volleyball or lacrosse being the most likely candidates.

Anderson’s plan involves UAA petitioning the NCAA for a rule change that would allow geographically remote schools in Alaska, Hawaii and Puerto Rico to substitute an individual men’s sport for one of the men’s team sports. In the past, UAA has used its remote location to successfully enact or amend NCAA rules regarding the now-defunct Great Alaska Shootout.

Earlier this year, the University of Alabama-Huntsville hockey team avoided elimination earlier this year with a successful online fundraiser that will fund the program in 2020-21, but UAA administrators have indicated they aren’t interested short-term solutions.

“Outside support would need to align with a plan for long-term sustainability in order to move forward,” the school said in a written statement the day it announced the proposed cuts.

“As disappointed I am that there isn’t more of an outcry, I understand where (hockey boosters) are coming from. They’ve been fighting this fight for a long time,” Curley said.

Hockey was considered for elimination in 2016, when the Strategic Pathways system-wide budget overhaul considered three scenarios for athletics, two that would have killed hockey. Instead the university proposed cutting skiing at UAA and UAF and indoor track at UAA, but dropped the plan when it discovered the NCAA was unlikely to allow the two schools to dip below the Division II requirement of 10 sports.

Curley said he will fight for the program, but he is less optimist than Anderson and Boggasch that the teams can be saved, especially the hockey team.

With an annual budget of $1.54 million, hockey is the most expensive sport in UAA’s $9.3 million athletic budget, and other factors are conspiring against the team as well, including years of declining attendance and a poor win-loss records.

Schachle, who is coming off a sophomore season during which he was UAA’s fifth-leading scorer, said people have been trying to get rid of hockey for a while now.

When the state-of-the-art Alaska Airlines Center opened a few years ago with facilities for every sport but hockey, “that was proof they didn’t respect us enough to put us in there,” Schachle said. “They completely disregarded the hockey program.”

To save money last year, UAA moved home hockey games from Sullivan Arena, which holds about 6,000 for hockey, to the on-campus ice rink that has seating for fewer than 1,000. At the end of the 2020-21 school year, UAA and UAF are in danger of losing their conference affiliation when the majority of Western Collegiate Hockey Association teams plan to leave to form a new conference that doesn’t include the Alaska schools or Huntsville.

“Unfortunately, the stars seem aligned,” Curley said. “I believe the decision has been made and this is what’s going to happen. It’s something that has been out there a long time, and now it’s come to fruition.”

The UAA athletic department is due to receive $5 million in state funding for the 2020-21 school year, which is 6% of the school’s total state funding of $83.5 million, according to figures provided by the university.